Helping someone out with a build, I've not looked into streaming PCs all that much before but I know at least that the 8350 is pretty solid for streaming.

I also don't know their end budget, so I'm starting it lower and then it can tier up depending on the end budget.

So then a few questions arise. How is the 8320E as far as gaming/streaming goes, it's just a little slower 8350 right? Which should make it pretty solid, I also picked it as to not stress the MATX board too much, the higher end E part is about 60 dollars

And do you've any other suggestions, thanks. 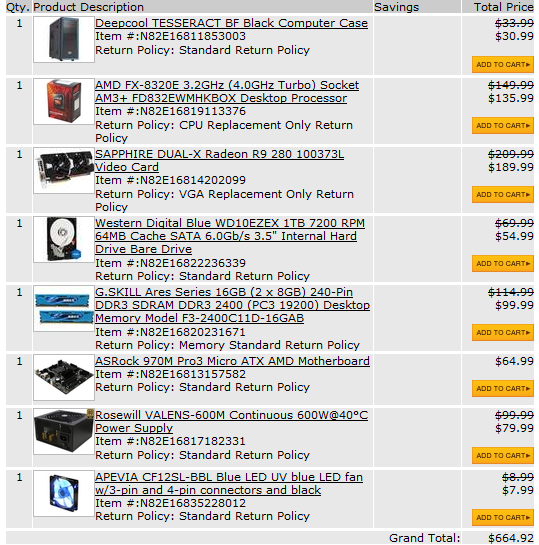 I would look for a new 970 board at the least for any of the AMD 8 cores. Other than that though the build looks pretty good. However I'm not sure on the watercooling...if its a matx case I'm not sure that it will fit.

Any idea what games they are going to play/stream? You may want to upgrade the cpu and gpu, and for this price range I would suggest air cooled (not stock) over water cooled.

http://pcpartpicker.com/p/wy8xmG is my recommendation for under $900.

Breakdown: The xeon is a cheaper i7, but with a lower clock, so it has 4 cores + 4 virtual cores; which, makes it good for streaming and editing. The cpu cooler is well known for how good it is for the money. The case is good on the inside if you can bare the exterior looks, it comes with a few fans and extra can be added if you want. I picked the cheaper and higher rated H97 MOBO and 16GB of RAM (I think 8gb is okay, but in your posted build you had 16, so I went with that). R9 290 is a good and affordable GPU for gaming and streaming/editing. The PSU is by corsair [EDIT: apparently really good], and look to http://www.jonnyguru.com/ for some reviews of power supplies. I also added windows for $15 because there are ways to get legit windows for that price, I won't explain them because I don't know their validity, but from what I have read it is legit, I would search for a post on this forum to find it.

If you want a pure Newegg build and/or a cheaper build, ask me.

That motherboard looks old and kinda terrible, I would recommend something better. Asrock has recently released a mATX board that doesn't look terrible, the 970M Pro3.

Looks like the better choice, you get the much better 970 chipset (760 is very old now and not very good IMHO).

Edit: the Gigabyte GA-78LMT-USB3 could be another choice, but you want the latest revision. The latest is rev6.0 IIRC, black pcb.

as far as i know,
there are no decent m-atx am3+ boards, with a decent enough vreg design to run a FX8 core properly.
Atleast not overclocked.

Do keep in mind that the power delivery is still a pretty weak 4+1 if i remember correctly. As long as you don't overclock that 8320e you should be fine.

That looks pretty solid, but I don't see a USB 3.0 front header on the board, am I just blind?

EDIT: I found waldo, it's just under the back USB 3, never seen that before.

Yeah, it's not an overclocking board. At least it has a heatsink on the VRMs. For overclocking you want the full ATX boards, Asrock has recently released a couple that looks decent. The Asrock Fatal1ty 970 Performance/3.1 has 220W CPU support and x4 M.2. Still PCIe 2.0 of course, but the best there is for AMD. 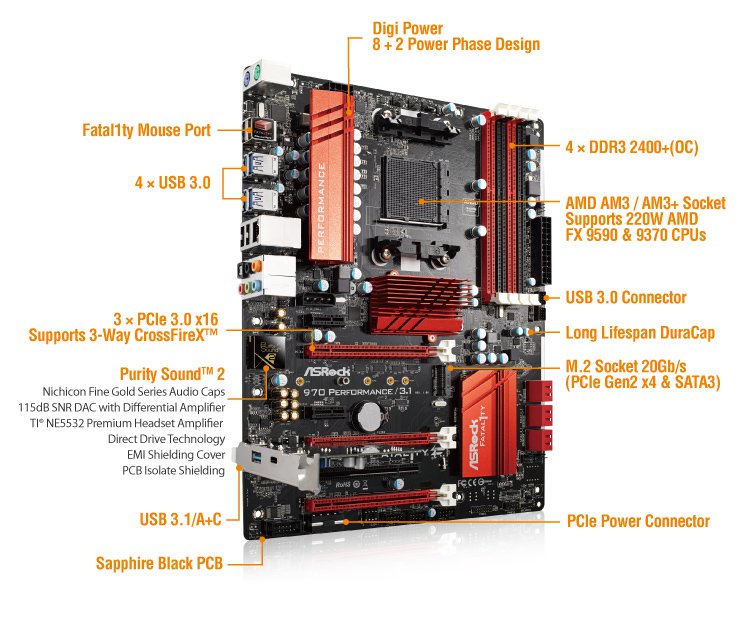 It's quite new, I think it launched just a month ago or so.

MSI is about to release a new AM3+ board, the 990FXA-Gaming. SLI support and USB 3.1 on board. Might be a contender. PCPer news post

From my personal experience I recommend the Asus Sabretooth R2.0 of the 990FX boards, I used it and abused it for years and it performed very good indeed.

THe Asrock 970A performance, has 220W cpu support on paper,
but i can tell you allready, that it does not support it.
VRM´s and mosfets run way to hot on that board.

But what's the pricing on that board? Because it seems like you might as well get an i7 with a lesser motherboard if you're going to spend a lot.

Trouble is many a manufacturer doesn't give good numbers on what is too hot. Checking the chips and reading datasheets might be the only option sometimes. But as always, if you think your VRMs run too hot, put fans on them.

Well i readed allot of complaints about this particular board, allot of people seem to have issues with overclocking FX 8 cores on it.
They all complain about the same, that the vrm´s and mosfets seem to be overheating.

Since the FX9590 is an overclocked FX8350 to 5.0GHz, it could be that you run into the same issues as manny other.

Well, the Fatal1ty 970 Performance/3.1 launched late march so it hasn't been out two months yet. That said it looks like it has the same powerstage as the old 970 Performance, so if that board has problems, this might have the same (looks similar, specs the same etc). If it wasn't due to unstable firmware etc, the boards do have different BIOS. One could hope that Asrock has fixed things with the update, but you never know. Would be nice if some reviewer would test stuff like this and do comparisons, wouldn't it?

The Asrock 970M Pro3 seems to be pretty cheap (it was on newegg for $60 IIRC). And as it isn't an overclockers board, I don't think you'll need a closed loop cooler for a 95 Watt CPU. The boxed cooler will be good enough. There is a thread on OCN where people talks about successfully running an AMD 8-core on that board at 4 GHz (all cores), so a 8320E should be no problem.

I suppose, but it's nice to have, I mean a decent low profile cooler is going to run around 40 bucks, another 40 now sets you up for a good while on all your cooling needs, and that 40 bucks isn't going to get a much faster CPU I don't think.

Plus it's going to be a nearly silent PC for streaming which is nice.

Although if the budget goes ATX then no reason not to just get a hyper 212, the current case I don't think would fit a large air cooler, I recently tried to fit a dark knight II in an N200, was so close, yet so far. Although I didn't actually take the time to put on the CPU...

I think that on a 95 Watt CPU that won't be overclocked (APM on etc) the stock cooler will be okay and not too loud. I can be wrong of course. Though many of the closed loop coolers are optimised for performance and have noisy fans and pumps, you'll need to do some research on the specific one. I agree that a nice cooler is worth it in the long run though if you have the money. 80 bucks is still quite the expense on a cooler, add that to the cost of the 8320E and you are closing in on an i5 4690 (not that I really know if that CPU is good for streaming mind).

nad yes, quiet streaming PC was it. Sorry kind of missed that. I do think a tower cooler is a better idea than a closed loop cooler. All Asetek/Coolit derivates of closed loop coolers I've seen have been more noisy than a large tower heatsink with a low RPM fan. And the pump in closed loop coolers have a limited lifetime, when it starts to rattle the whole thing is basically junk.

A quick search on Seidon 240M turns up the SilentPcReview. They seem to think it's better than many other CLC, but a traditional tower heatsink is superior. It's more for overclockers that don't care that much about noise.

Liquid coolers may be well-suited for performance enthusiasts who push their components to their limits and thus have to pair them with high airflow, high noise coolers, but if you're looking for quiet cooling, traditional heatsinks remain superior. The 240M is an excellent performer when fan speeds are cranked up but once you drop it down to quiet or near-inaudible levels, its efficiency falls off considerably.

The Silencio 352 case fits CPU coolers 155 mm tall, so the Hyper 212 would probably be a tight fit. I don't know, if the size of the case is important, I would go with some kind of CLC (try to under-volt the pump and fans) if I had the money, or probably try the stock cooler. Or go for full ATX and a cheap tower heatsink.

Could work as well, but spending the extra 40 bucks now takes care any future upgrades as well, and it's just kinda nice to have.

Size doesn't matter, but I don't know the end budget so I was starting on the low end. like I said, if it goes to ATX, tower cooler it is.

It's too bad the nepton is sold out like everywhere.Found the 120XL version, but I'm not sure why it's so costly, suppose that's the cost of silence
http://www.newegg.com/Product/Product.aspx?Item=N82E16835103200