Having recently completed a new build, and came across a
contiunuation of a problem I had never really bothered to investigate
before - now it's causing more issues that before. Previously the 8350
had a stock cooler so it sat at it's stock speed. Even then my rig
showed some strange behaviour on start up - where it would boot up,
spinning the CPU fan, then turn off - stopping the CPU fan. After this
it would start up again, and boot normally. After installing a Noctua
NH-D15, and enabling clock multiplier changes, this behaviour was
worsened. The rig will now start up, turn off fully, start up again,
appear to be on (powering USB devices), reboot again, and then boot
normally.

It seems to have always been boot looping at least once, but now it's
repeating more and for a longer time. I don't know a better way to
describe that I'm sorry

Secondly, what are ye're OCs for your 8350s? Once I got to 4.4 I saw huge
instability on Prime. Should I up the voltage delivery? I'm new to
overclocking, could use any advice ye have.

4.3, stock voltages on a hyper 212 evo
Not adventurous but never had a problem

huh, I tried 4.3 and while prime didn't show much instability the boot loop got a lot worse. Might try it again sometime. Could use the extra power.

I have had that same boot problems since day 1 when started to OC. I just live with it. Running 4.7 with 1.50V

What's the boot loop like with 4.7? I'm fine to live with it, but if I'm gonna push it (my goal being 4.7) I don't wanna get spooky scared by an unending boot-loop.

Boots up for 3 seconds kicks on the fans, then stop for about 5 seconds then boots normal. I'm prime stable at 4.7 with 1.5V

Fair nuff, UD3 yeah? I'll give your settings a go

problem I've been having is when I try to set my ram 1866mhz my system crashes on boot... haven't gotten around to figure out why. 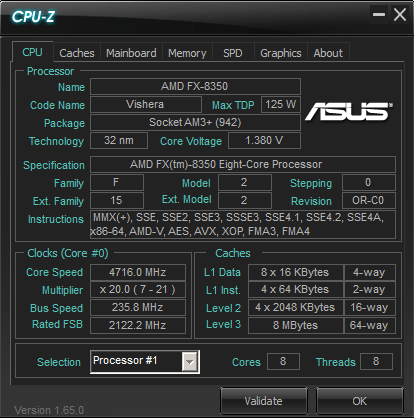 Prime 95 seems to hit pretty hard on AMD cpu's and this is what I was getting in a 1hr long stress test. 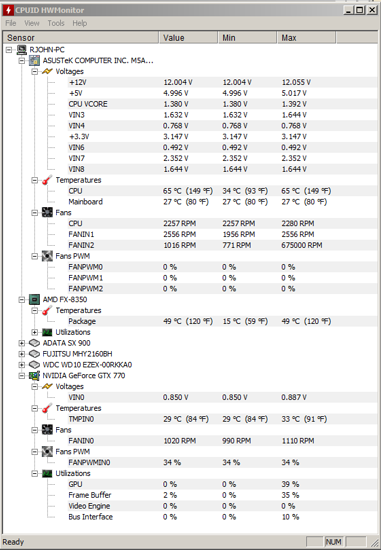 I had to play around with my Memory Timing to get mine to be stable to boot up at 1866.

Do you know what revision of the UD3 your board is? Also, is your BIOS version the latest?

Here is a basic FX-overclocking video, courtesy of Jayztwocents.

I must be really lucky. I'm getting 4.6Ghz stable on a UD3 Rev 3 near stock voltage with a hyper 212 evo and temps never cross 62oC.

Although it is a long-shot for being the issue on start-up, for overclocking it may be the VRM overheating. Before Revision 4.0, the UD3 only had a small heatsink to help cool its VRM. If you want to try putting a fan directly over it, go for it. It may help.

I must be really lucky. I'm getting 4.6Ghz stable on a UD3 Rev 3 near stock voltage with a hyper 212 evo and temps never cross 62oC.

Voltages? (Also, are your clock speeds actually staying at 4.6ghz?)

sounds like an issue with the mobo indeed.
THe boot loop could be something related to the bios.
Try to update that first.

No idea, any idea how I would find out?

Huh, that's a possibility, I don't reckon it is the problem, but when I can I'll give the fix a go!

Just slighly above stock, around 1.33V i think, but i'm not sure. It's a pretty old OC and it's been stable for over a year. And yeah it does stay at 4.6, CnC disabled. I'll try to get a picture when i get back home.