Stop GPU from underclocking at Idle?

I've got a HD 5750 card that I've discovered that when in Idle or atleast not under a decent load it artifacts a lot. As soon as there is a decent load and the card gets up to a higher frequency the artifacts go away. Is there any way to keep the card from underclocking its self when it thinks it doesn't need the extra power? I've even tried flashing its Bios to the x-vapor 5770 bios, it seems to have helped ever so slightly but it still artifacts when it thinks it doesn't need to be working hard. Thanks!

Use MSI Afterburner and keep the clocks at a level where the artifacting disappears.

That doesn't work. I've already got MSI afterburner installed and that is just a overclocking tool. It doesn't keep it from underclocking down to like 157mhz core and 300mhz memory.

I've tried to figure that walkthrough out once before but it seems to be super outdated. There isn't a place to create a profile like they are saying to do anymore. Or atleast if there is, I cant find it.

How do you go about doing so? I've seen no settings called ULPS anywhere. =/

Well thanks anyways guys, I think Its dead now x3 Bios Fiddling. cant keep it from going to a black screen after like 45seconds on the desktop now Lol. In the Trashbin it goes, either that or I've got myself a nice coffee cup coaster GPU Lol

keep as a coaster, if not take to best buy so they can electronics recycle it. do what you can for the enviroment.

Coaster it is. its more stable as a coaster than it ever was working that's for sure xD 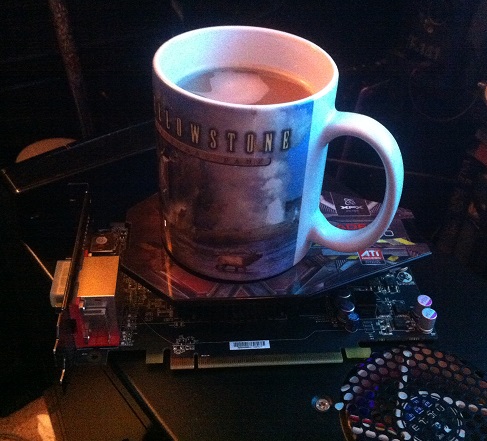 Are you able to RMA the card, or reflash the bios, (you can install 2 cards, I recommend an old geforce 2 or other ancient card (to avoid confusion of the updater), the reflash the card, then RMA it.

When ever you get a new videocard, especially a factory overclocked one, you must test it for stability, and if it fails at any more, RMA it.