Steam tried to monetize mods (Its over now at least for Skyrim...)

Another thing is that there's really no guarantee of any kind of quality. It's basically fan made DLC, and it might be shitty and awful. And good luck getting any kind of refund from Valve.

And I feel like this really goes against the spirit of modding and everything that makes it great. That being said, I predict that this will be removed in a about a week due to incredibly low sales.

Also, if some scrub doesn't already know this, nexusmods is the place to go for mods instead of the awful Steam workshop.

Yeah, and what about if the mod updates and becomes incompatible with other mod or something like that?
I don't know, my head hurts. I never expected this.
I hope Bethesda and Valve reconsider this and just leave an Endorsement option at the Workshop. They said this is for supporting mod creators didn't they?
But since the donation money will go only to the creator, I doubt Valve will accept this without making any profit.

Honestly, I think I agree with @wkpsfbx I don't think payed for mods will catch on and I think it will die quite quick

I'm not here to start any trouble but I do feel that there is some missing information about this whole cut thing.
From what I know about how this sort of stuff works its highly likely that the sale split between at least 5 different entities:
Content creator
Distributor (Valve)
Publisher (Zenimax)
Royalty holder (Bethesda)
Taxes
Now whether or not the cut seems fair is up to you, just wanted to clarify some of this as best I can

I don't really find any information about that man but what you said totally makes sense.

Valve really needs a good competitor. Someone who would keep them from letting themselves go too shitty.

Usually that sort of information stays internal but if you know how to look at these things right you can figure out whats going on.

I am testing the new GOG client and I will do anything in my hands to support it but yeah, Valve is a big and powerful monster right now.

Gopher had some thoughts on this subject:

That is the point of why they have such high taxation on it. If the numbers from the article hold true, then Valve/the dev will get a much larger sum of money than the content creator will. Not only are they getting their cake, they get to eat it too. I honestly think that only a handful of modders will actually embrace this idea. One of the best selling points of PC gaming is modding, and free mods are at the center of the entire modding community. Most modders are not going to shy away from this form solely due to the essence of modding itself.

While the demoscene has remained a largely European phenomena until a few years ago, the modding community is more international and has so far largely been driven by the same thing that drives the demoscene. A place where people create for the sake of creating itself. Those who wanted to capitalize on their efforts found their way into the games industry. I believe in a similar fate for this stinker of an experiment.

I have found the Official Revenue Sharing Terms: http://steamcommunity.com/workshop/workshoplegalagreement/?appid=72850

The best part is Valve through these actions are now supporting and endorsing not only pirating but also profiting from the pirating of other peoples mods.

There are all ready mods up for sale form people who just uploaded someone else's work.

Also the vetting process in this case is us the users not Valve. They want us to repost all falsely uploaded content.

Off to GOG for all future game purchases, at least until CDPR screw us too.

Also with compilation style mods that use assets from other creators everyone would need to be on board or you are just stealing others work.
The first one I found was "wet and cold" you can download v1.42 for free but v2.0 is paid, though it is pay what you can (min $.25), and this game uses a lot of assets from other mod authors and they may not be okay with this.

and everyone one is still good with steam? when they pull sh*t like that.

Much of TF2, CS:GO, and Dota 2 stuff is community made so it isn't a huge shift. Unreal Tournament 4 will be doing a similar model as well.

But Valve has to be sure to prevent a flood of crapware and scam mods which will be almost impossible without some curating.

But they won't, just look at green light, valve curates content as much as a apple and google play do in the sense that they don't really do shit.

I look at this in the spirit that mods are being treated as dlc's. I don't necessarily agree with this point but this is the reality. Valve's "fee" is ridiculous though seeing as they are just a payment processor. Would anyone as a mod creator want to give valve 75% of your revenue for all of your hardwork when all they do is host your mod? I don't find their model very attractive from a business point of view. 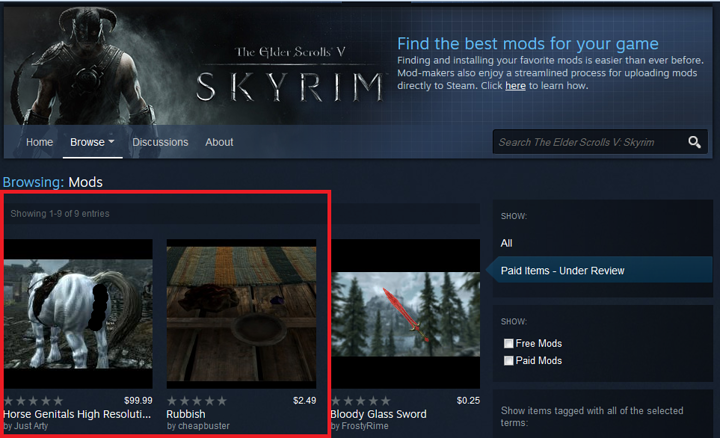