So if you guys haven't heard, Steam is now offering a different tier of mods that you pay for. At first, I was shocked they would do something like this where they are nickle and diming you essentially. Then I thought that maybe it was just an option to support mod developers and act as an incentive to potential ones, while still giving the option of paying nothing for the mod. Alas I was wrong, there is no option to simply download the mod for free, but you can change how much you pay from 99 cents to $100. What do you guys think of this? I personally don't like them doing this, but I don't really care because I use places like Nexus mods for such content.

Something like a COMPLETE (WHEN WILL THEY RELEASE ANOTHER UPDATE) Project Brazil I'd pay for. Devs need to make money somehow.

http://steamcommunity.com/workshop/aboutpaidcontent/ Yes way, they are starting with Skyrim. I wish it was April 1st man. 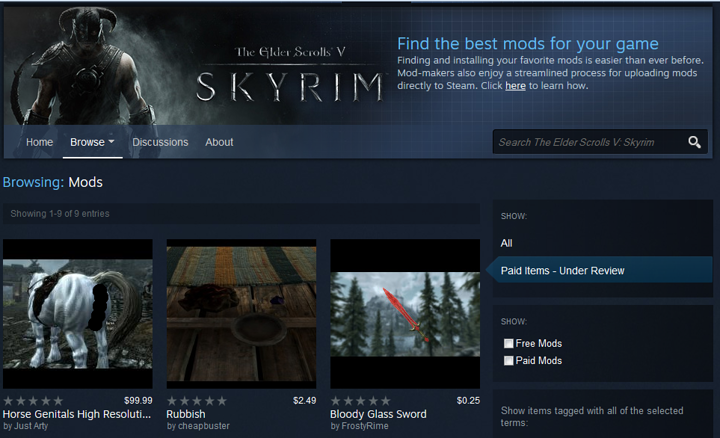 They should have just added a donate option. modding has always, in every game been a way for player to share content with the community FREELY, it should not be made into a way to have modders make dlc
And what if mod authors remove there files from the nexus and upload them to the workshop, it does not just effect the workshop it effects the nexus as well

Steam finding another way to get more money without pissing off the majority of people... Not surprising.

wish people would read the details of what steam is doing so that they can have an intelligent conversation about it instead of reading a headline then coming here and posting from their ass.

If I'm not mistaken, it's up to the content creators if they want to charge for their mod. People can still make free mods. Steam is just giving the creators the option... and I'm sure taking a cut off the top. So if you don't like that a mod isn't free, blame the guy who made it.

The bigger problem is people are now stealing Nexus mods and claming them to be there own and chageing for them and i think steam takeing %75 of the money from the mods is a joke.

Yeah. People stealing other mods is BS, and there should be a good review system in place for paid mods. As far as what % Steam takes off the top, I've got no clue. 75% does sound steep, but I guess if you are looking to monetize your mod making, 25% is better than nothing. Though, IMO, modding shouldn't be about making money. It's about contributing to a community. Hopefully most modders will feel the same way and keep their mods free.

I keep seeing a lot of hate about this. But you can't use a new steam account. There's a minimum payout threshold and people who steal content will get banned if reported. I feel like this will even its self out quite quickly.

And if people want to charge for there mods that they have the rights to why not? If its not that good people won't buy it.

OK, everyone and kids, into this thread.