Surprised that no-one has made mention of this yet! Heresy! At such a moment in time!

50 years ago, families were sitting down to watch the first broadcast of Star Trek. At the moment, BBC America (among others) is broadcasting a marathon of the 1966 Original Series. Not as much of a hit then as it was now, Star Trek still all but paved the foundation for modern Sci-fi television. Now it spans hundreds of episodes and over half a dozen canon TV series. Come out of the woodworks, trekkies! I know you're there somewhere! You know who you are! Come out, celebrate and DISCUSS!

I'm glad someone had the guts to start this thread. The modern world owes Star Trek so much. The original flip open cell phone was called the StarTac for obvious reasons (I started using Capt. Kirk's ringtone after I saw that documantary), one of the guys that invented the MRI was inspired by Dr. McCoy's biobed and there are countless other examples of people being motivated by a TV show that was pitched as just another western, but set in outer space.

The title of this excellent book says it all. 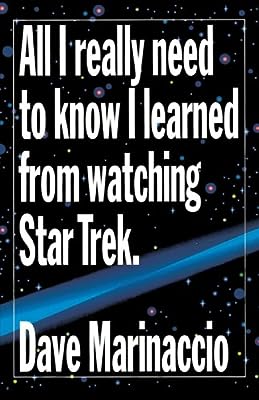 YA?Another of the numerous slender volumes that tells readers all they need to know. What Marinaccio does here is to filter life experiences and situations through Star Trek-colored glasses. He uses C ...

I'm glad someone had the guts to start this thread.

O.o is there some sort of Star Trek stigma on this forum? /s

It hooks up to your phone or device via Bluetooth® and has a built-in microphone for hands-free calling. Once connected, one touch answers/ends calls, plays/pauses audio, or accesses Siri, Google Now, or Cortana. Not, however, Majel Barrett. You know we may be the only two people on this forum who saw this and wondered what would happen next week.
Wish I still had those needle nose pliers we used to change the channel to watch it.

O.o is there some sort of Star Trek stigma on this forum?

I think it's called Alzheimer's

O.o is there some sort of Star Trek stigma on this forum?

I'd highly doubt it. Would surprise me. I'll be honest though, I always preferred TNG to the original series (just started watching TNG from episode 1 again last night :D).

As an American, this thread means nothing to me.

As a die hard Trek fan, I feel obligated to make at least one post in this thread and say...

“I like to believe that there are always... possibilities.”

I always preferred TNG to the original series

In Connecticut one channel (61) was know as "Your Star Trek Station". Everyday after work they played TOS in order and then TNG in order. The Original Series started out good but then devolved into Captain Kirk shows up on a planet, he unplugs the evil computer running their society (for their own good) and he flies away promising their lives will be better now that he has burned their society to the ground.

The Next Generation started off weak and then evolved to get much better in later years.

absolutely love star trek. even though roddenberry was a bit of a nutcase when it came to his depiction of what life would be like in the future. TNG and VOY will always remain my personal favorites, though.

that said, i think kirk is always gonna be my favorite captain though. dude took shit from no one.