I’ve noticed some recent Level1Techs videos in the motherboards playlist are unlisted. Is the L1 team aware of this? Sorry to be a nuisance but I was curious.
Also obligatory ‘btw, first post’

Oh that’s interesting. Do you happen to have any screenshots or links?

I’m still at Trust level 0 I think so I can’t upload images, but if you go to the motherboards playlist you’ll see two unlisted videos: One about and Asrock x570 motherboard and another more recent one about motherboard raid.
There’s significantly less views on these so I’m pretty sure it’s not just something on my end. (I’m not sure why it would be either.) There’s nothing really wrong with these videos, except for some rather oFANsive puns, that leads me to believe that leaving these videos unlisted is intentional.

I wonder if some were patron videos that were added to the playlist, but accidentally not listed for general public after exclusivity period. Or if they are new, perhaps still “patreon perk” vids, but added to list anyway?

TL bumped you should be able to now

another more recent one about motherboard raid.

Patreon-only till they are made public on YT. 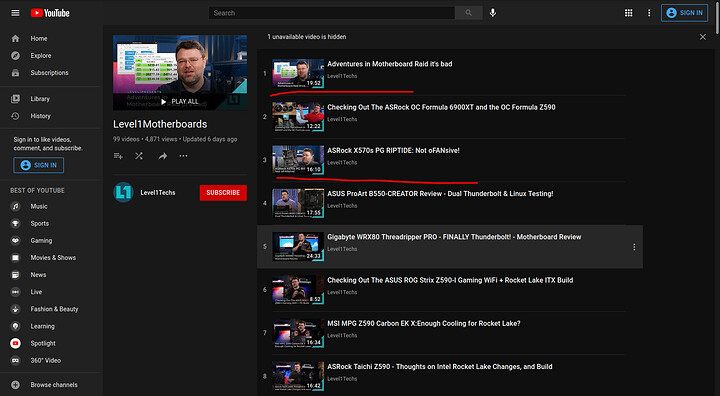 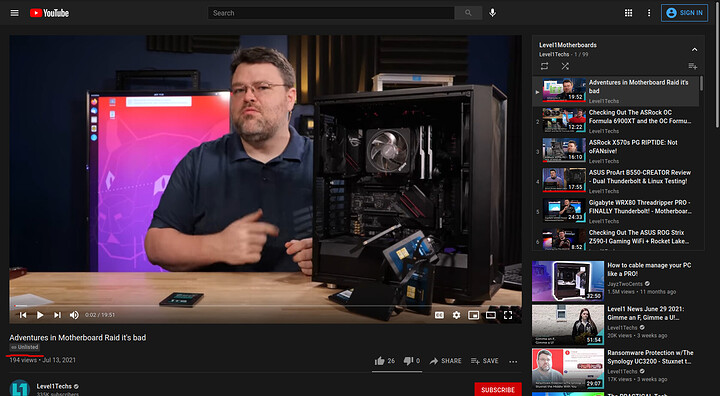 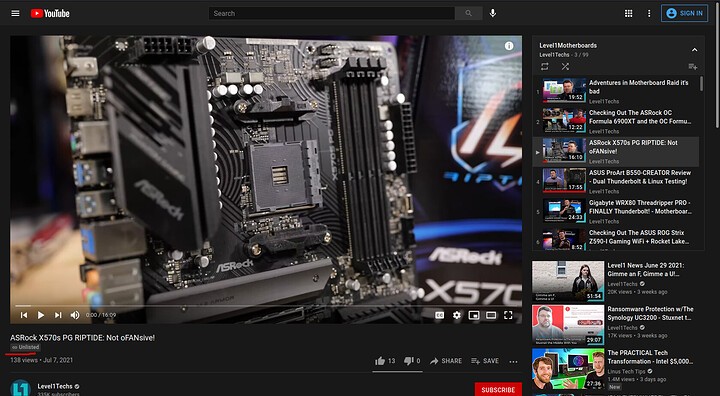 Speaking of unlisted videos, I remember there being a video where Wendell took a look at a RISC-V developer board and played Quake on it, but I can’t find that anywhere. Maybe my memory is failing and there was no such thing, but in the original video here: 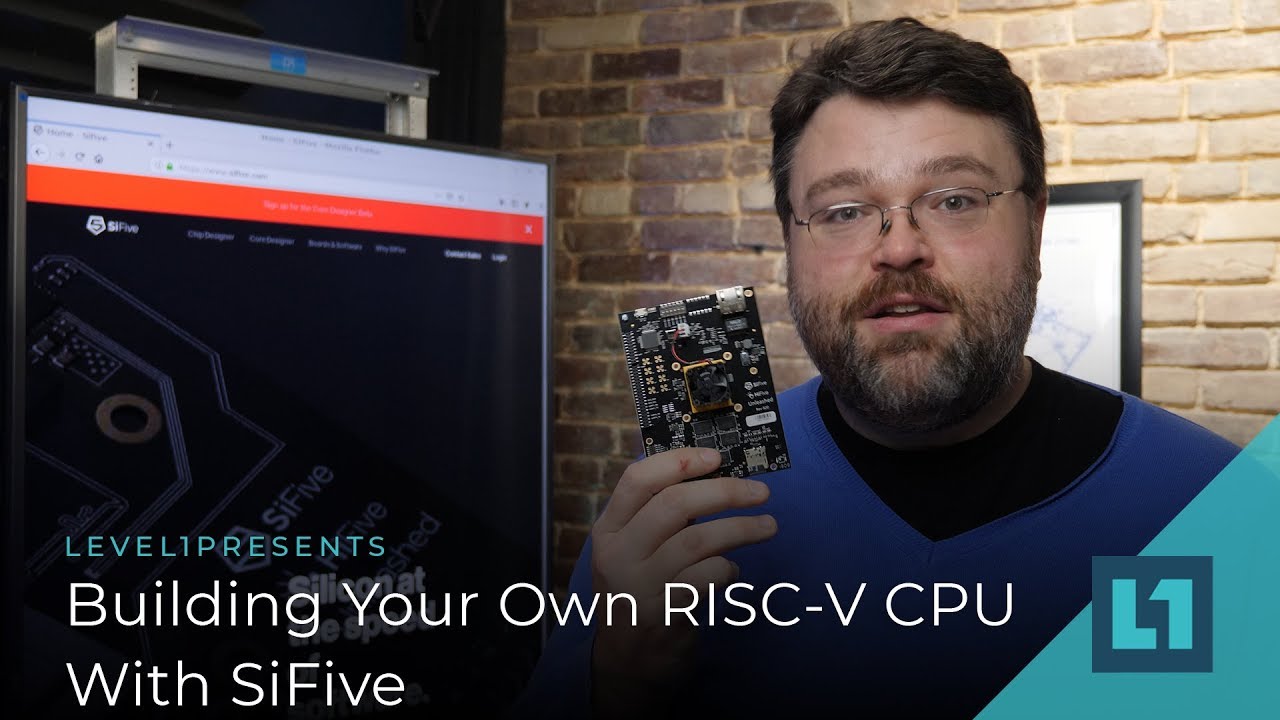 Wendell said he was going to take another look at a board from MicroSemi. Searching for “risc” on the channel only shows this video, the interview with a SiFive guy, the PINECIL and the “Advanced RISC challenge” (which I recall was an ARM server). Someone tell me it’s not just me having a bad memory. I also taken my time to manually look through the upload list from 2 years ago (!) after the above video was uploaded and couldn’t find it. I really want to rewatch that quake on RISC-V video.

I think it was a linus video.

Could it have been this LTT vid @Biky 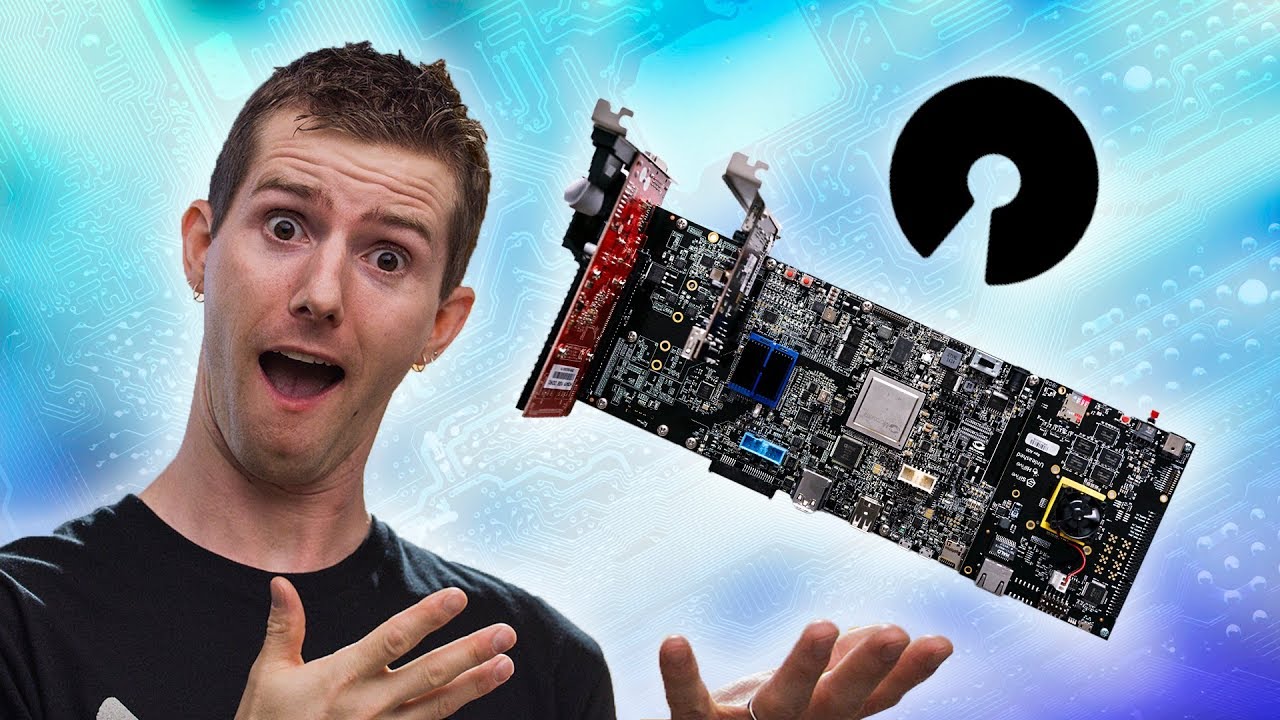 the vid talks a load of junk, but goes to Risc-v chip, daughterboard adn motherboard from t=477 (07m55s)

Nope. I remember that video as well, but I recall Wendell did a better job at it (it’s probably the same FPGA board). But again, my memory could be failing me. And again, Wendell does mention at the end of the video I posted that “in the next video, we’ll take a look at this MicroSemi board.” So that gives me a reason to believe there was something out there. I don’t really trust my own memory, as I know best how unreliable it can be at (many) times. But I guess I’ll never know.

okay. I don’t remember Wendell playing Quake, apart from the reference he says in the beginning of the vid you linked (not even any b-roll)

He looked at a few Risc-v boards and stuff, but quake doesn’t shake any memories loose.

On the flip side, I’m now looking again at risc-v