So sorry to hassle you good lot - am I correct in thinking the latest 4 Core AMD CPU’s are the only ones that have on chip graphics?

I only ask as I’d like to build a PC for light duties, basic tasks and would quite like a fanless design (or close to it). So far I was thinking a Ryzen 5 2400G would do the job, can’t see any 6 Core models that have an iGPU.

There are rumors that the ryzen 3000 will bring 6 core apus. But it appears, that the 3200g and 3400g are just quad cores, which come out tomorrow.

Wow, thank you @Goalkeeper , really kind of you to answer so promptly. Haha, you like your CPU’s don’t you lol!

Oooh, does that mean that the 3000 Ryzen will be 6 core AND have iGPU do you think?

This is a tad complicated. There will eventually be 3200G and 3400G models with iGPU, but those are still based on Zen+ silicon for laptops (12 nm silicon fabrication node). The first batch of new 7nm models to be announced tomorrow will not have iGPUs.

However, there is a rumour that AMD is working on 3600G and 3700G models, which are supposed to combine a chiplet with six or eight CPU cores with a Navi GPU chiplet. No dates known yet, but it’s going to take quite a bit of work, because the I/O chiplet also needs a rework in order to provide video out to the AM4 socket.

I hate that the APUs are a gen behind.

The intel chips have iGPU’s AMD is just the first one to put a big one on a chip at a descent price, Intel has been improving thier IGPU’s starting with Skylake.

Kavari they had to ditch the L3 cache to make room

Thanks for that, hmm, perhaps I’ll wait a while then. I’m sure I don’t need more than 4 Cores, but I think these days it doesn’t hurt to have more than 6 or more.

Good info though, thanks!

Very fair point, I was hoping for a cheap’ish unit and just assumed the new (to me) AMD platform would be the best solution. May be I’ll check Intel for their iGPU models. Thanks!

Kavari they had to ditch the L3 cache to make room

Kavari had to ditch a lot of things so the CPU doesn’t completely suck. Half the PCIe lanes comes to mind…

It kinda is.
The APUs from the 3000 series will use the Ryzen 2000 cores and whatever GPU, so even though its a gen behind, the power efficiency and all the rest is still super high on those. Ryzen since Gen 1 is more power efficient than Intel’s offerings and the GPU is way more powerful.
An intel quad core is still more expensive than a Ryzen APU and the Ryzen APU still spanks it in GPU and power efficiency.
Just make sure you have fast ram, as in 3000, not 2400…

May be I’ll check Intel for their iGPU models.

I would not suggest it. If you are looking at AMD APUs the Intel ones are no where near as good on the GPU side. So if you want it more for this than CPU then it is a worse option.*

They are better on the CPU side though and at this stage have even an 8 core CPU with an Iris Pro 630.

But then there is the odd third case, Intel CPU with AMD iGPU. There is a NUC with that, NUC8i7HVK, only a 4 core 8 thread CPU again at 4.2GHz but Vega M GPU. It is very expensive though.**

*you will also hear lots of talk about them being terrible and just hopeless at games and such. I have a system that is just an Intel iris Pro 580 iGPU for graphics and it is fine for casual 1080p games and a few of the newer heavier ones if you turn down settings and don’t expect it to be anywhere near actual dedicated graphics hardware.
For what its worth as a comparison I run Rocket League at 1080p with all the settings maxed and it runs at 60fps reliably, does dip but not hard or for any length of time, just fluctuations really rather than struggling with the game.

**I have then previous generation of this NUC, the 6i7KYK with the i7 6770HQ, 4 core 8 thread, iris pro 580 iGPU. It came bare bones like a lot of NUCs and you picked memory and storage and OS. The new ones seem to come pre loaded so you don’t get the same choice, or price. The I/O is way better though too on the new one.

Thank you for that, very much appreciated.

I’ll definitely go for the faster ram as I’ve heard repeatedly that Ryzen like that. I wonder if that applies to Threadripper as well?

, you saved me a trip looking at Intel. I’ve got a little experience with Intel CPU/GPU as my laptop went strange with Windows 10 and decided not to use the Discrete graphics (Firepro). I started using some 3D programmes and it was immediately obvious something weren’t right!

I’d really like a NUC but I just can’t justify the cost and would prefer to build a modest mid sized tower instead. To keep it out the way, I was tempted to bolt through the side of the tower and into the wall…but from a maintenance point of view, that’s completely stupid! It wouldn’t fall off though, the bolts I’d use would and could hold the weight of 4 people…did like the idea though.

Your experience with the Pro 580 is very impressive, very good to know and didn’t expect that kind of experience. Cheers!

Not really sure…
To be fair, Zen 2 (ryzen 3000) have changed the way that works.
Zen and Zen+ are basically clocking the internal core communication equal to the ram speed so faster ram means faster core communication… 1-2% performance …

No problems, glad I could help some.

I got quite lucky and basically got an openbox otherwise new (the plastic protector was still on everything) NUC for about half price. Looks like some business bought a few and then never used them, made its way to a liquidator and they sold the batch off in pieces.

This is a tad complicated. There will eventually be 3200G and 3400G models with iGPU, but those are still based on Zen+ silicon for laptops (12 nm silicon fabrication node). The first batch of new 7nm models to be announced tomorrow will not have iGPUs.

They are indeed already out.

I really can’t wait for the Ryzen Zen2+Navi APUs to come out, but i think that will be after the new PS5 and Xbox come out. AMD are likely busy supplying those sorts of parts to Sony and Microsoft right now in advance of the new console launches.

Wow, that’s pretty lucky, if I saw a NUC for half price I’d probably be keen. I see the latest ones (may be the older ones too) have VESA mounts, pretty smart unless you’re using it of course

Yup, they have had them for a good long time. That was the original plan for it, screw it to the back of a tablet monitor, and I can still do that with the parts I have, but it all works better in the box so I never tried it.

Damn, what an opportunity missed, would have been perfect. Hey ho!

Looks like my hopes have finally realised, and it only took 2 years!!! 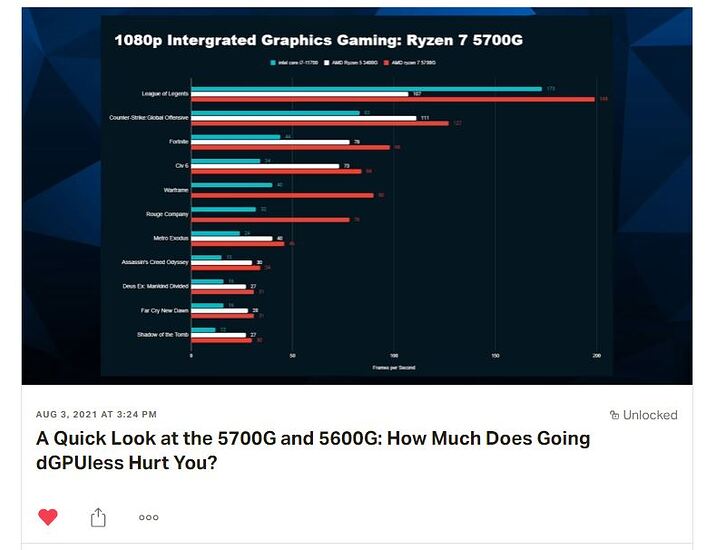