Alright, I fucked up. Messing with System UI, I decided to fuck around and set the “QS Header Tile Count” to 0… That caused an instant and endless error popup of “System UI has stopped,” and the background to go black (no time, battery life, notifications, nothing else is shown; just black). Holding the power button allows for “Power Off,” “Restart,” and “Lockdown (??? What is this???)” to popup.

Rebooting and booting into safemode results in the same results; “System UI has stopped,” with a complete blackscreen behind the popup.

What I cannot do:

I have 0 idea how I would go about fixing this with TWRP (has a terminal, and “ADB Sideload,” which sadly doesn’t allow me to perform ADB commands into), Fastboot, and/or installing another ROM alongside the main one.

This is what my phone screen looks like (image stolen from the internet) when the O.S is booted. 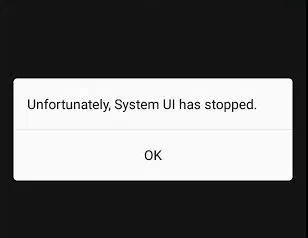 . Nothing to interact with in the background, as it’s just black.

With ADB shell access (which I don’t appear to have access to within Fastboot and TWRP terminal), you can use the command “adb shell settings put secure sysui_qqs_count X” to change the “Header Tile Count,” according to this post. Now, how else can I interact with that that secure setting…

Now, what if I disable System UI via this method? Hopefully that’ll remove the cache/saved data after reboot, and reenable?

I don’t think the TWRP terminal method is working at all… After trying a bunch of commands, I don’t think it’s changing anything… Now I’m stuck again…

It’s fixed. I went down a few holes which led to nothing (ex. using TWRP terminal, set command), but eventually found a way to fix it.

Within TWRP, it seems like I can also use ADB when I select “Mount” and “Enable MTP,” but for whatever reason, my device remained “unauthorized.” Some other people said that I need to reflash TWRP to fix that.

So for whatever reason, when I booted up the device, the ADB drivers weren’t loaded (even though less than a week ago, I used this PC to root the phone). I installed the drivers again, and the phone automatically authorized the PC… No idea why or how. Maybe I saved it to do that? Anyway, after that, I used the command adb.exe shell settings put secure sysui_qqs_count 5 (based on this XDA thread), and the phone popped back to life!

Anyway, the phone is fixed? Now I definitely know not to do that again. TIME FOR A BACKUP!

hi , i’m facing the same problem . My phone has black screen and i can’t do anything except power off and reset etc ,touch isn’t working , it’s exactly same problem as yours but my phone isn’t rooted so i can’t use twrp .
can you please help me ???