[SOLVED] How to distribute NFS from KVM host to guests?

In case you are running into the same problems as me, here is what helped me out in the end.

The goal: Configure a Linux KVM host to allow NFS traffic over an isolated, virtual network.

I am stuck getting NFS to work for KVM guests. They are provided with 2 two NICs, one being a macvtap directly attached to my Intel ethernet port, the second being a virtual bridge for isolated communication over which I want to share files over NFS.

My networking expertise in Linux is rather fresh and I can't get a working connection between my host OS and the Windows 10 guest I would like to share data with.

The virtual bridge is on the network 10.0.0.0/24, where I can ping 10.0.0.1 (gateway). However I cannot get a response when pinging 10.0.0.2 which is my Windows guest. There is no DHCP running, the guest recognizes the network and idicates "no internet access" (obviously).

NFS is working from what I can tell the exports of showmount -e show /home * which seems correct. Connecting on the host by using nfs://localhost/home works fine.

So, the isolated network virbr0 I created with Virt-Manager shows up when typing ip link in terminal, i can ping the gateway but none of the guests connecting to it. Am I missing anything in my configuration, maybe firewall settings? I need your help.

The Libvirt documentation tells that the isolated network is capable of communicating to both the guests and the host.

I'll write a more detailed one in a bit, but I think the issue is that your host also needs to be connected to, and have connectivity with, that same bridge.

I am assuming the real network is 192.168.0.0/24 or something and the virtual one will be 10.0.0.0/24. Check to make sure each relevant NIC has a the correct statistically assigned address. After that, as long as both the guest and host are connected to the same switch (isolated virtual bridge), ping should work after disabling firewalls.

Also: No "gateway" should be involved in your configuration, and pinging a "gateway" isn't going to let you ping whatever is behind it anyway.

[...] I think the issue is that your host also needs to be connected to, and have connectivity with, that same bridge.

Wouldn't I expose the physical network to the virtual one then? I would have liked to avoid that.

Gathered the output for both machines in case you need it. The Windows one is in German, I hope this is okay:

Here is the Linux one:

So the issue is that a Windows guest (KVM) cannot connect to your host Linux over NFS. The Linux host has an NFS share.

For that to work, things need to look like this: 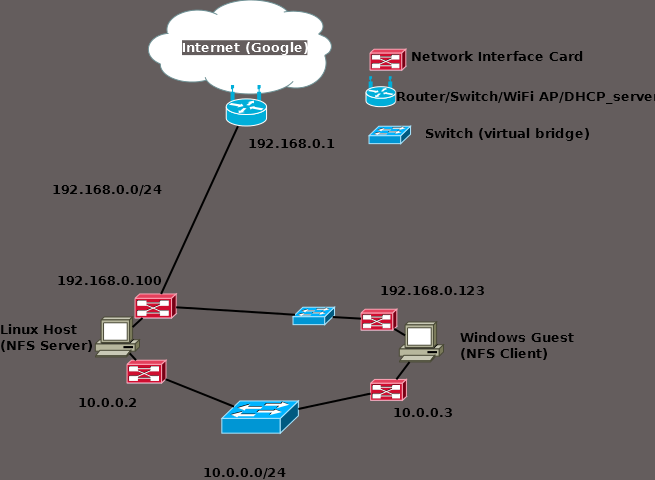 So... why is a "gateway" involved in your config? If the point is to isolate sharing from the main network, the virtual bridge network should not have any "gateway."

It might be simpler to destroy the existing bridge, and create a new one if it was not created properly, rather than trying to fix config.

The Windows guest should pick up an address on one of it's NICs from your DHCP server and ping your host over the real network.

At this point, it is important to test file sharing over NFS. If NFS file sharing does not work on the real 192.168.0.0/24 network, then fix it before trying to get it to work over a virtual bridge.

Once the guest (Windows) and host (Linux) are both connected to the correct isolated virtual bridge, it should simple to get them to poke at each other. Assign both the Linux-side NIC and Windows-NICs static addresses and disable firewalls temporarily.

ipconfig /all, ip link to make sure the addressing scheme is not wrong.

So the solution to the problem should be obvious now by looking at the diagram I sent you and these addresses.

vnet0 appears upon booting the Windows guest as well as [email protected] so I assume these are the NICs that connect to their respective networks
I am kinda confused about the existence of virbr0-nic - It appears upon starting the virtual switch.

Remember that macvtap is a way to link a physical network adapter to a virtual bridge. It is not a NIC itself. [email protected] thus means that it is currently bridging to the enp0s31f6 adapter, which is your physical one.

virbr0 is obviously the brige itself, which is given an address by the KVM software in case you would like to configure it later to do NAT and DHCP and stuff.

Which means! that either virbr0-nic or vnet0 is the virtual network interface card that links Linux/NFS share/apps to that virtual switch. And... neither has an address. Maybe if one or the other had an address in the 10.0.0.0/24 network, then it could communicate on that network. o_o!

Update 19.07.17 - 0:13 CEST: I could confirm that NFS works on the physical network. It must be related to the virtual network or the firewall then.

Thanks for your help! Very detailed.

So far so good. Pings now work (which was firewall-related as you mentioned before), NFS is not yet working. It might be due to the firewall as well. and this virbr0-nic is still a mystery.
Keep reading if you are interested.

So NFS works on the physical network as do pings.

Pings also work on the virtual network, but NFS does not. From this random post It looks like virbr0 is a reserved NIC created by KVM. I don't really get the point of it since I thought that was what macvtap0 was for, but w/e.

My recommendations are as follows:

That is about the edge of what I am familiar with. The rest is specific to KVM and how it handles it's NICs.

I made NFS to work and mount on boot on the Windows guest. Thanks for your help here!

I have made a new directory /home/public and bound my home folders in it (Pictures, Music, Videos, Downloads...):
mount --bind /home/karmek/x /home/public/x.

This is the NFS exports:

On Windows it's mounted at H:\. Permissions seem to work although I lost write permissions temporarily when mapping the multimedia folders. Just checking the respective box in NFS-Client settings is enough to restore it.

I can't hide certain files and folders like $RECYCLE.BIN and desktop.ini.
They appear on both host- and guest-side. Do you know a way to hide them?

Also I consider running Samba instead of NFS particularily for Windows. Could you give me some advice here what's faster and more convenient?

I can't hide certain files and folders like $RECYCLE.BIN and desktop.ini.
They appear on both host- and guest-side. Do you know a way to hide them?

Unfortunately, I do not know of a way, but! there was a thread on this a while back:

Note: I have not read this: https://forum.level1techs.com/t/hidden-folders-files-moving-from-linux-to-windows-or-how-to-change-dot-to-hidden-attribute/117220

Also I consider running Samba instead of NFS particularily for Windows. Could you give me some advice here what's faster and more convenient?

NFS is faster and should be used over Samba.

That said, Samba is easier to set up and I use it over NFS. Samba is single threaded meaning it performs really poorly on higher bandwidth links (>100mbps) and low-end CPUs (like a RaspberryPi's ARM CPU or Intel's Atom series) when compared to NFS. That said, both SMB and NFS software performs terribly compared to Network-layer block transfer protocols like iSCSI or FCoE. SMB is also notorious for security vulnerabilities.

For slow links ~100mbps it should not matter, or if disc I/O limited. For anything faster, like involving faster HDDs, SSDs and Gigabit or higher networks, NFS is a better choice, albeit harder to configure.

Unfortunately, I do not know of a way, but! there was a thread on this a while back:

Note: I have not read this: https://forum.level1techs.com/t/hidden-folders-files-moving-from-linux-to-windows-or-how-to-change-dot-to-hidden-attribute/117220

The powershell script they posted in that thread did not help unfortunately. Even right-clicking said files/folders and hitting the "hidden" checkbox has no effect on its visibility. It just gets ignored. It seems I have to live with it for now.
At least i can hide them on the host-side by adding them to a .hidden file in each folder (eventhough this appears on the guest storage then too ^^").

NFS is faster and should be used over Samba. [...] That said, both SMB and NFS software performs terribly compared to Network-layer block transfer protocols like iSCSI or FCoE. SMB is also notorious for security vulnerabilities.

I am using ZFS on Linux under the hood so the OS resides in a zVol on SSD, other installed data on another zVol on HDD and backed by 50GB SSD cache. Both are attached via VirtIO.

NFS makes it easy to maintain all my files in a signle spot without needless copying. Secrurity-wise it should be fine as it's only served over the isolated, virtual network. Performance is good too from what I can tell after a brief test (10 Gbit/s + jumbo frames

Sigh... If I could only hide these Windows-specific files. But yeah, all my initial problems are resolved now. Thanks again @Peanut253!

I have added the solution to the OP so it will help someone in future.