(SOLVED) Did I win the sillicon lottery?

Did I win the silicon lottery?

Overclocking to 5Ghz was so easy, with minor changes and most of the settings set to auto except the multiplier.
The system runs stable and the temps are great under load.
The system runs at 25C idle and never gets hotter than 78C under load.
I benchmarked the s… out of this thing and still the temps are great and the system keeps running stable under load, benchmarks and several games.
I never had this experience, normally overclocking takes you almost a day to fine tune it to stable.
But this CPU was so easy I ask my self, how is this possible?

But now, at first try it works great, does this mean I won the silicon lottery with this CPU?
If it is that easy to stable overclock this CPU what can be done to push this CPU even further?
Not to forget to mention, I bought this CPU as a OEM Tray deal, not in the fancy box a standard CPU comes in.

Greatings and many thanks in advance.

I am curious, what voltage is the cpu running at with that clock speed? And are you using the air cooler through all of your tests? If so, I am very impressed. Is the cpu delidded?

I have a lovely 4670k that I managed to get to 5.3Ghz at the windows screen, but it would hang shortly after. Stable at 5.1, but only using liquid cooling and the voltages and temps were quite high.

Don’t leave us hanging, what voltages did you use?!

Thank you for your quick respons.

I just use the Noctua DH-15 cooler for all my tests.
I just changed the multiplier to 50.
The rest is set to auto, the voltage sits arround 1.32 volts sometimes it gets up to 1.35 volts, the auto settings handles this.

And the system runs at 5 Ghz, stable, this is so strange, I never had this before, and no the CPU si not delidded. 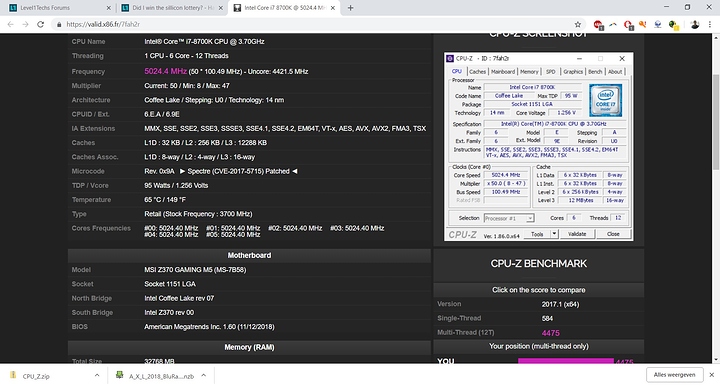 Here, look for your self.

most of the settings set to auto except the multiplier.

This is a really bad idea. Not every core is going to have the same voltage requirement. vcore should be locked. VID is often overzealous with its voltage and doesnt care about how long your CPU lasts.

You should be using hwinfo for vcore per core. You could have one core that is calling for more than is acceptable, then over time it degrades and you lose stability. Always watch your voltage regardless of temps.

Thank you for your respons.
I know that putting all the settings except the multiplier on auto is not ideal.
But then again, if I look at the benchmarks, and also HWmonitor the voltage on all the cores does not exceed the 1.35 treshold on auto settings.
And besides the voltages the temps are great and this with an air cooler.
If the auto settings would spike the voltages I should see this in my temps, right?
But that is not the case.

I will set the core voltage on every core to a fixed treshold, but yet again, I never had a CPU that was this easy to overclock, stay stable and pass the well know benchemarks and play games.

Thank you again for your respons.

What benchmarks are you using to load the CPU?

I use Cimebench, CPU-Z and OCC.

lock vcore to 1.36 and push it until it wont pass benchmarks anymore then. Seems like a decent cpu.

Thank you, I will try this and I’ll post an update here.
But then, I use the Noctua air cooler, I think that this cooler is great but will get short in the end when I reach higher clock speeds?
Al least that is what everybody is telling me, use water cooling.
I never used water cooling, alsways air cooling, always the best air cooler you could get at any point of time.

Depending on the AIO the noctua air cooler is actually better than some water setups. If you have low ambient temps and good air flow the noctua can be pretty good with overclocking. The d15 in particular is comparable to some cheaper 240mm AIO setups. If you compare it to a decent 360mm AIO or custom loop then its obviously not going to be as good. The real limitation with intel chips isnt always the cooler, but rather the TIM under the heat spreader. A delided CPU with a noctua air cooler could be better than a custom loop water cooler and non delidded CPU with stock TIM.

I think you could get 5.1 or so out of it. 80-85c stable. You might go to 5.1 and then use BCLK from there to get a little more if you want to go further. You could also just lock the vcore where its at and leave it if its stable where its at.

One thing a don’t understand.
I set the vcore to a fixed voltage at 1.35 volts. how can it show up in CPU-Z at a lower voltage?
And still get this speed at this low temp, and again, also in Cinebench, I ran it 7 times still no crash.

And yes, in the case, the Evolv X I have 6 fans in total, all 140 MM fans from Corsair ML140, 3 front intake fans, 2 top exhaust fans and 1 rear exhaust fan.
All fans are PMW controlled.
On the DH-15 I replaced the well known noctua brown fans with the black variant, same fan but black from noctua.
Thermal paste that I use comes with the cooler.

Delidding the CPU, this I have to ask my brother, it is his pc that I put together.
This 1080P gaming PC is doing fine so far, I think my little brother will be happy with this build, lucky him.

I set the vcore to a fixed voltage at 1.35 volts. how can it show up in CPU-Z at a lower voltage?

Could be misreporting. Could be vdroop. I always use hwinfo because it reports current voltages min and max. Look up LLC - load line calibration for your board.

I am partial to the H100i AIO cooler. It is a 240mm rad with direct support for two 120mm fans. Been running fine for a while in a few systems.

That said, if the air cooler you have is treating you well, I don’t see a need to replace it. Aside from some bragging rights (kudos, btw), 5.2, or .3 or .5 isnt going to affect your day-to-day use any better than 5.1Ghz.

Believe it or not the nh d15 is comparable to an h100i gtx in performance. 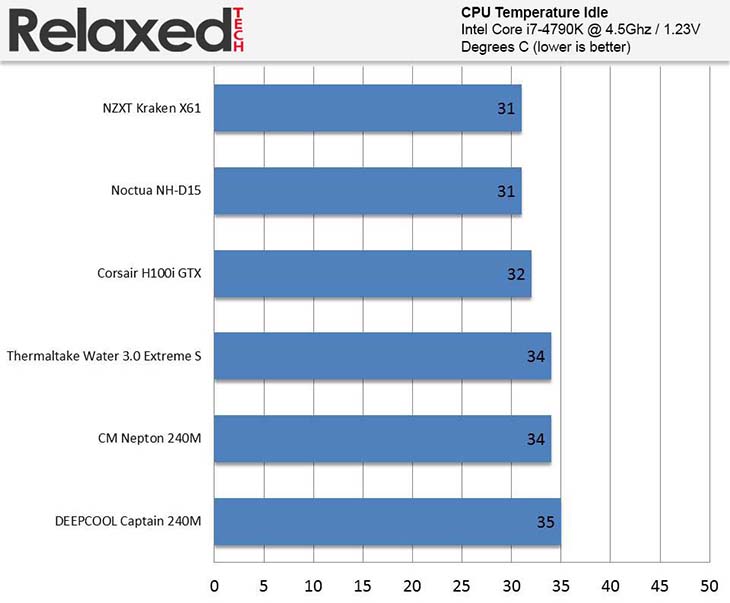 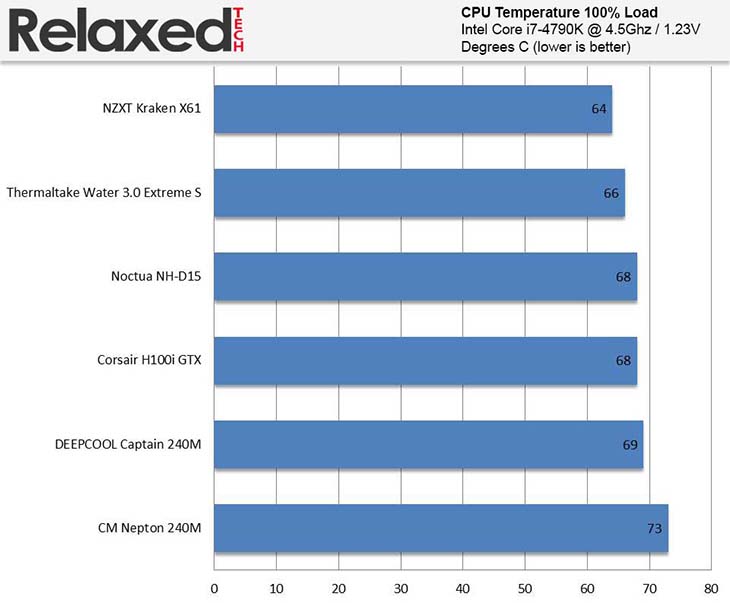 AIOs arent always the best option but that depends from build to build and what AIO of course.

Call me stupid I don’t know.
According HWInfo, I downloaded it.
( I run a stress test for the CPU using CPU-Z stress test)
When I run Cinebench I get the same results, with a small difference in temps and voltage.

During the stress test I get the following results according HWInfo.

Am I reading the stats wrong or do I do something else wrong.

How about that? I even have one of those CPUs!
Might have to pick up one of those coolers and give them a run. Would save a bit on electrics if nothing else and with fewer failure points.

So my question is answered, I think I won the sillicon lottery I guess?

LLC is a bios setting which boosts voltage based on load of the CPU. Its used to compensate for voltage drop under load (vdroop).

If you’re stable you can safely leave this alone. If you experience random lock ups you might bump it to the next setting up and watch your voltage to make sure it doesnt go much above 1.375. I have seen people push 1.4v on those chips but I wouldnt want to do that myself. YMMV

I think I leave it at tese settings.
For now it runs stable, I have to do some more testing ofcourse, play some heavy games and test with OCC as well.
Running this CPU at higher speeds etc will have not that much benefit I geuss.
And this for 1080P gaming, this is more then enough.

For now everything looks great and runs stable.
My brother is a lucky b… I geuss, I build this PC for him, I bought the parts for him, and he got very lucky with the CPU.

Greetings and have a fantastic new year.