I am in deep shit. I had a problem with windows updating, which rendered my pc basically useless. Now I'm running on xubuntu, I had hoped to see all of my drives pop up immediately. However, my 1tb internal hard drive is not being mounted. I have searched the internet empty and I just cannot find anything OR am too stupid to understand it.

I would love some help from people who, unlike me, actually understand this stuff. I have attached screenshots of my problem, if more info is needed I will upload it accordingly. 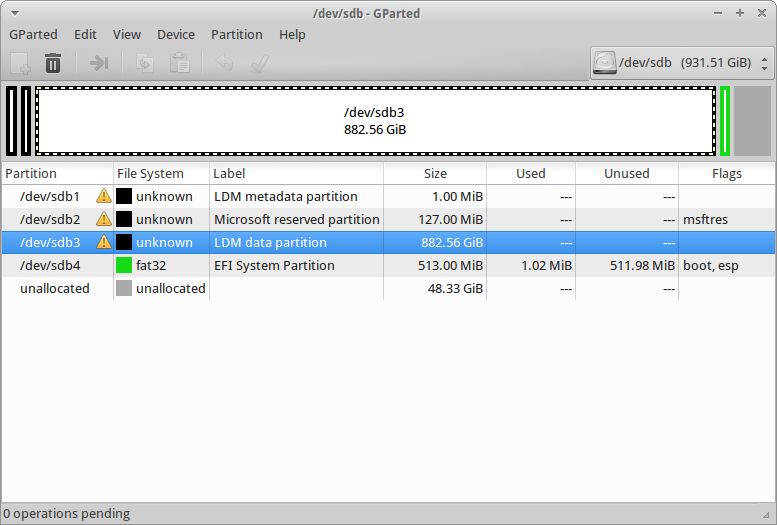 The 882.56 GiB partition seems to be my Data.. I guess. The hard drive had nothing to do with my windows installation, it was used as a storage hard drive for media, documents and all of that.

Can you explain, what caused this problem to happen? And what is happening when you try to boot into Windows?

Preface: I don't consider myself an expert in recovering hard drives, but I have some experience from my freelance tech days. If someone else around here knows more about this subject, chime in anytime.

When you say "rendered my pc basically useless", what do you mean? Is there a certain error message you get? Boot loop? It may be possible to rebuild the master boot record (MBR) and get your data back.

When you say "rendered my pc basically useless", what do you mean? Is there a certain error message you get? Boot loop? It may be possible to rebuild the master boot record (MBR) and get your data back.

I was going to reference that. When you try to install a massive update, and let's say for whatever reason the computer shuts off mid update, the computer could crap itself and the bootmgr could be corrupted or it just broke.

well, what lead to this problem up to this point was:

Did you install this on the same hard drive?

my ssd C: runs xubuntu on 3 paritions i think.

/dev/sdb/ is the hard drive i have troubles with, which is the one you see in the screenshot.

So you have two drives installed yes?

Yep, my ssd with xubuntu on it (which was the former w10 install disk, which I nuked) and the hard drive shown.

Hmm.. And what is it that happens when you try to boot into Windows 10 . Does it say BootMGR missing? Or something of that nature?

I found some instructions that may be of use. I have never personally used this method, but hopefully it works for you.

Edit: I'll go ahead and mention that after you fix the drive you'll probably want to relocate whatever important data you need from this drive to an external drive, then reformat it to ensure you don't experience any other issues with it in the future. I don't trust hard drives.

Yeah try what @bjorn here posted see if you get some good results..

The only thing i can think of is while it was updating, the computer shut off for whatever reason by accident and the MBR got corrupted. Updating your PC wont break something like this.

What confuses me is why this would affect a second hard drive. I've reformatted my main SSD several times without affecting any of my HDD's. Apparently I need to learn more about partitions and file systems.

well sorry if i wasn't clear enough in my initial post, but updating didn't break this hard drive. I had no issues whatsoever with it on windows. I just had a lot of issues with the w10 installation. So I installed xubuntu, removing windows. Now I cannot access that hard drive. I also don't know why it's supposedly a ldm partition.. oh well.

Linux tends to do that. Personally when i need to set a partition or mess with something in Linux, i disconnect the SATA connector that connects to my Windows SSD just to be safe.

See if you can fix it with that link bjorn posted.

Though personally, i would of backed up all the data before removing Windows from Linux, only because if you for what ever reason do something wrong, there's a slight chance you could break something, for example like the position you're in now. Try those instructions and see if you get anywhere. Hopefully all goes well.

yeah.. I didn't think a "secondary" hard drive would be affected. :/

That's good to know. I know I have a few linux distros buried somewhere in my mess of HDD's. I should probably reformat, but I'd hate to redownload TBs worth of games, mods, etc. Ah, the struggles of being a data pack rat.

Back to the subject at hand, I'm curious if xubuntu reformatted some of the 1TB drive to use for itself, but ended up only reformatting the MBR (if I'm using the term correctly.) So the data is there, but nothing recognizes it as data, just as "hey, something's here, but there's not a record telling me what this is or how to read it."

As @Kat mentioned, backups are essential for even us power-users. If you can't live without the data, then you should have at least one backup, if not three. I can honestly say I probably would have made the same assumption that it wouldn't affect the data drive, but perhaps there was a setting that was overlooked during the install of xubuntu. It's definitely categorized as one of those "Huh, that's funny" moments.

Good luck in your endeavor. Breaking stuff is part of building an extensive skill set. The best part is the motivation, crucial data at risk. I had a MBR get corrupted on a data server for one of my clients, and his previous technician had set the backups on the same hard drive. That was the first time I successfully repaired a MBR.

Good luck in your endeavor. Breaking stuff is part of building an extensive skill set

It is, though frustrating lol