It was all running fine until I was looking at the sound options and clicked on the Sound Profile, which was blank. Then the analogue output just disappeared from the selectable outputs and now I have no sound.

I have tried flushing alsa followed by a reboot to no avail, if that is even relevant to my situation, as that was a common suggestion during my Google searches. 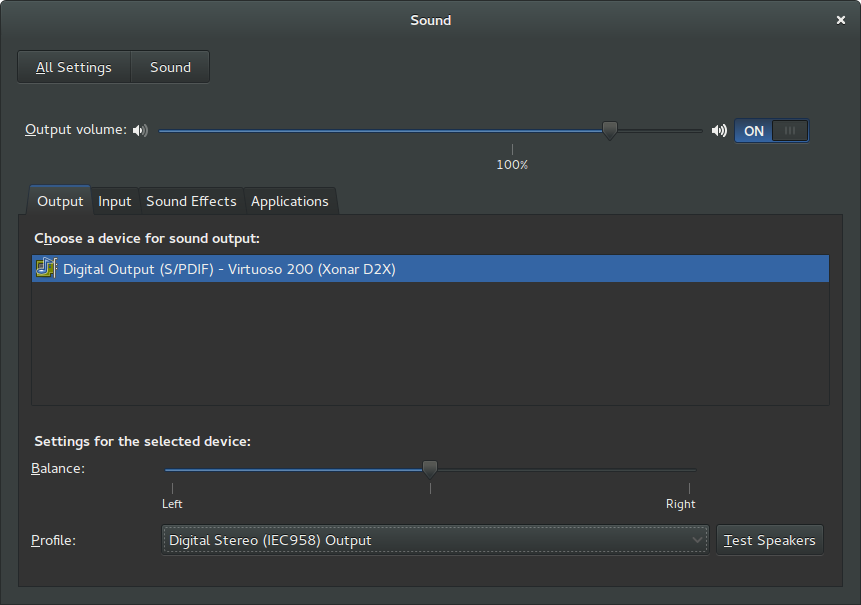 Could you tell me if you can find your audio card in /proc/asound/ ?
What is the output of

Well, either I'm interpreting these values wrong or the kernel doesn't even see an analogue ouput.
You said that it was working fine before clicking something in the sound options.
Can you confirm the card is working (e.g. under Windows).
Did you do any recent updates?

Could you also post the output of cat /proc/asound/modules ?

The correct module for your sound card is loaded.
Install alsa-utils and check alsamixer (in the command line) to see if the outputs are there.

I've had similar issues with pulseaudio before, and it generally causes a lot of headaches for me. Try reinstalling pulseaudio using these instructions: http://askubuntu.com/a/475665 . Works occasionally for me.

The correct module for your sound card is loaded.Install alsa-utils and check alsamixer (in the command line) to see if the outputs are there.

sudo apt-get install alsa-utils
Reading package lists... Done
Building dependency tree
Reading state information... Done
alsa-utils is already the newest version.
alsa-utils set to manually installed.
The following packages were automatically installed and are no longer required:
linux-headers-generic-lts-utopic linux-image-generic-lts-utopic
Use 'apt-get autoremove' to remove them.
0 to upgrade, 0 to newly install, 0 to remove and 0 not to upgrade.

Not sure how to do the second thing you said

Not sure how to do the second thing you said

Just open up a terminal and type in alsamixer - hit enter.

I'm kinda running out of options here.
You should try and disable /mute (press space) the S/PDIF channel.
Also, you could go through some of the ALSA basics:
https://wiki.archlinux.org/index.php/Advanced_Linux_Sound_Architecture

OK thanks for your help anyway

Tried muting the S/PDIF but it wouldn't work on any of the output channels. Tried it on the inputs and it did :S

Is it working again?

No, I meant I couldn't mute the outputs but I could mute the inputs 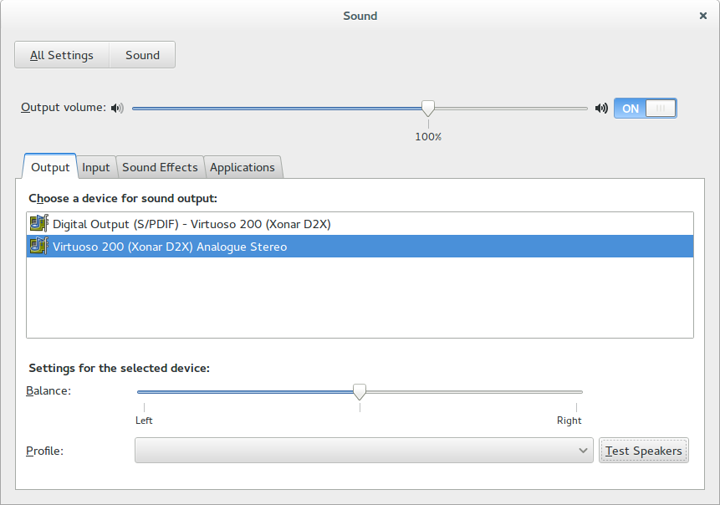 Is there some way to solve this without having to just create a new user account?

Is there some way to solve this without having to just create a new user account?

Check if you can find the ~/.pulse/ and ~/.config/pulse/ directories and rename them (e.g. pulse-old) - you could also just delete them, however renaming them is the secure way.

I have had similar problems. In short, it's PulseAudio's fault and there are two simple ways to try to deal with it. The one I recommend trying first is

...which will give you a slightly less stupid audio source/mixer control than the one that comes with Gnome by default, and will hopefully allow you access to your analog inputs and outputs from any user account.

If that doesn't work, uninstall everything related to PulseAudio, especially pulseaudio-module-x11 which, at startup, takes command of all audio sources and then fails to manage them intelligently, as you've discovered. The reason I recommend this only if the first approach fails is that pulseaudio is that other programs may depend on pulse. God only knows why so many developers have chosen to access the audio subsystem via pulse rather than ALSA, but they have.