Today we have a lot of multi-slot GPUs that occlude neighboring PCI-e slots. Those slots are still useful, especially with AMD systems that can use all the lanes. Has anybody found a great way to mitigate the GPU occlusion to use those slots? I’m aware of GPU break-outs for many cases, but usually those are only for one GPU and they depend on the case.

Does anybody know of any right-angle PCIe extension cables? E.g. something that could squeeze into the slot under the GPU, but then provide a lead for something you could put elsewhere in the case (e.g. NIC, RAID card etc).

Wouldn’t a riser cable accomplish the same thing in those slots?

There are zillions of PCIe “riser” as @Pauld42 mentions or flexible extensions on the market. However like display cables buyer beware.

This is kinda strange as a question though as I’ve not really seen too many boards that clump the full length slots together in a way that a GPU can cover them. I know I’ve got decent enough room between my GPU’s…that is unless your caveat is to use the often times 1x or 2x mini slot they often tuck between the full length slots for an audio or network device.

I don’t think he’s concerned about just the full length ports but the half slots that are sprinkled between the full-size slots, those tend to get covered.

So that thing I said ;p

My bad. Multitasking browsing here and adding performance monitor sensors to servers, I half read that.

Heh np I was just being cheeky. Good we both caught it though but at the same time the OP hasn’t said if that’s the issue of if he does actually have some whack board with tight PCIe spacings.

I know when I originally read it I thought he wanted a way to add a second GPU…I’m dealing with some nasty sinus BS that has my brain in a perma fog and focus is a biltch.

Risers are generally how its done, but actual riser cards not riser cables. You won’t really encounter it today with a good brand name riser cable but back in ye oldin days you’d have a riser card just because the cables would be a pain in the ass to manage and trouble shoot. 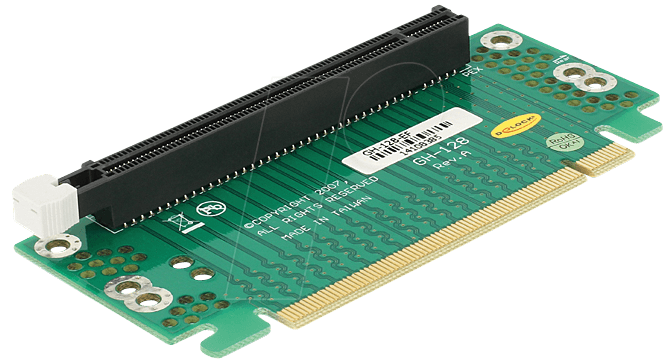 this kind of a thing only you’d have to shop around, pull your hair out, make a blood sacrifice to Ba’al, then pay out though the nose for the exact one that should fit your system only to find out they measured the height of the card from the edge of the gold plated connectors to the very edge of the PCB and not to the PCI slot and then contemplate why you really needed the lower slots in the first place.

No, see thats when you simply whip out the angle grinder and do the obligatory fourteen vacuum clean outs just in case of metal shards before rebuilding the system minus the rear chassis fan. When life gives you lemons you squeeze the rind right into lifes eyes.

Yeah I hear that. I hate those situations though because the metal shards they afearz me. So I rip the whole thing apart before the dremel, grinder, drilling hellscape. That said that is one of the pluses of those crappy cable/ribbon “risers”… just lay the stupid ass card on the bottom of the chassis and walk away.

Cables today are near perfect so long you go with a good brand thats got some actual user reviews. Phanteks make some spiffy riser cables imo (I’m using one atm) but I’m no riser cable connoisseur, my spiel about riser cards should explain why I and anyone who wants to avoid hairpulling sessions should avoid this sorta riser card stuff at all costs unless you can nail down the exact right case, board (main PCI-E x16 slot location) and riser card.

Oh and bifurcation cards are a thing. A maddening thing that will usually involve riser cables anyway unless you have half height graphics cards and stuff that doesn’t need a PCI io slot like a WiFi board with detachable antennae.

I don’t trust any cable anymore just because there is no where to buy that isn’t a massive possibility to be a knock off. Buy Phanteks…arrives a Fantexs

tradies route. My go to om the e- ficking oooh thats a tax bill -orpe has been Caseking. My old Ye Oldie Shoppe VAT shit still stands so I can grab some stuff no fuss no muss but a shit load of cuss from them fairly cheaply these days.

Now if I could just stop playing Super Auto Pets…

When I was on a low end Ryzen, I used a mining riser plugged into an x1 slot covered by the GPU. Then plugged another GPU into that riser, just to use the NVENC and NVDEC modules.

After moving to higher end Threadripper and eventually Xeon systems, full x16 slots were getting blocked,. so I moved to a full x16 cable, and a Supermicro x8x8 riser. 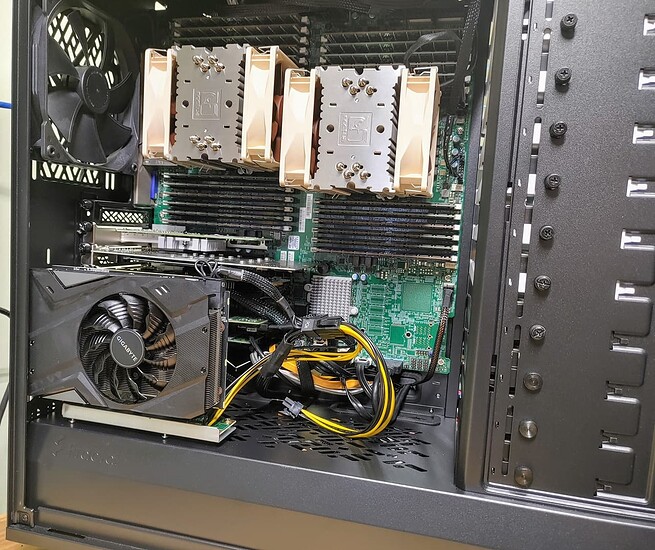 This is my current “eggbasket server”… no slots are actually blocked by a GPU but I turned one x16 slot into two x8 slots using a supermicro riser, since I needed more slots, always seem to need more slots!

Thank god I’ve never had to do something like this no matter how much insanity I’ve added.

Clearance of GPU shroud / covered PCIe slot, will have it approaching impossible
Typically be just PCIe x1 slots lost… NOT much loss, when most add-ons are x4 (+)

Yeah the horizontal distance to slip the cable/card in there and not push the GPU shroud out is probably not going to work out. This really sounds like buy a better board with the layout for what your needs are rather than futz with all this BS. I’ve never had these issues because I always plan spacings out and buy accordingly. If I had to buy a new board right now there are very few that meet my needs because even the boards with three or more full length clump 2 at some point. All this “gamer” garbage leaves little for serious use outside the TR4 boards. The old man in me says I’M BUILDING A COMPUTER NOT THROWING A RAVE YOU A HOLES! (waits for “Gamer/RGB” BS to die).

Though it doesn’t help boards are “all in one” these days. I can’t stand how many boards force wifi6 right now. Yeah I want a high end system then kneecap the networking with wifi…How about you take that crap off, sell at a better price and add something someone needs, like PCIe slots…oh and take off that garbage audio too…and NIC, yeah now if you could add another few MORE PCIe slots so I can choose my own that’d be Great MMMM K.

Goes to Bk and orders a BORK burger…YOU SOB THAT’S BEEF AND PORK -BORK!!! YOU SAID I COULD HAVE IT MY WAY!

great ideas! I see, the problem is indeed as hairy as it seems.

yeah what I have in mind is some sort of riser cable that can fit under the GPU heatsink and then route to a smaller pcie card (e.g. nvme disk, NIC, thunderbolt etc etc) and just tape that thing into the case somewhere. (disclosure: I have a threadripper pro box with 7 full-length PCIe slots, tho I appreciate on many gaming boards there are half-length slots that still get occluded as somebody else mentioned… those are great slots for NVME disks! more lanes = faster RAID0)

the main problem is most of the cables i see appear to hook into the slot dead-on instead of 90 degrees, and thus I’m pretty sure they either won’t fit under the GPU heatsink or if you bend them you could really risk tearing the wires inside the cable or at least tearing the insulation.

are there really no crypto miner cables / risers out there with a 90-degree hook-up? I guess in that scenario you’ve probably got everything on break-out anyways so you don’t have any occluded slots.

the main idea here comes from the Linus video where they showed pcie riser cables aren’t necessarily as bad as they seem: How many PCIe Extensions is TOO MANY?? - YouTube

with such big investment in new PCIE specs and 5.0 and beyond going thru the roof speeds, the problem seems a little more relevant, there’s a bit more incentive to PCIE all the things