I recently replaced my XFX380 4GB with the VisionTek RX480 8GB, and I've been having this strange issue:

When playing a game/video, the machine completely crashes/locks up with solid colors on each of my three screens. Each time, I have failed to take a picture and will do so should it happen again. The colors vary. I cannot do anything once it locks up.

I'm running out of ideas here.

I don't run OC, I had no such issues before with the XFX 380, and I'm half tempted to go back to it for the time being if this doesn't get worked out soon.

Things I have tried:

SFC\scannow
Full AV/Malware scans
Rolling the Driver back, and forward, both have same result
MEMTEST+86

Tonight I'm going to try chkdsk. I notice the issue is more likely to occur when streaming. Additionally, its strange that when playing a video/game, the card almost always shoot to 100% use. I have searched various places and come up with no luck, anyone got any ideas/having similar issues?

Jay of two cents did a video about just something very similar but in his case it was OC. Even if you did not or do not OC sometimes bugs like this can be fixed by under clocking or bumping the voltage. Could be a bad card or unlikely but PSU not giving enough power

sounds like a bad gpu, but just incase, what psu?

I think its likely that its a bad card. I can try under clocking but the issue existed before I even installed Afterburner. Since it does it under load I think its likely.
My PSU is a 1500w Thermal Take, Silver if I remember right. I can double check with my PSU rail tester, but since it was fine before I don't think that is it likely.
Gonna check those today and maybe start RMA otherwise
Thanks for the quick response guys

Don't screw around, RMA that thing or you'll most likely regret it just after the waranty runs out.
(speaking of experience)

I would try underclocking/undervolting first because waiting on RMA can be a real pain. Otherwise, yeah, try to RMA it.

I'll try and underclock it when I get home. The card was otherwise completely stock but I will try it. I'm wondering if that is the best choice at this point anyway

Even though I do suggest trying the under everything to see if it helps I also recommend getting that RMA rolling in the mean time anyway.

If turning it down helps then it is still defective at stock speeds so RMA all the same. At least if it works under clocked you can get a little use out of it while waiting.

I'll check it out. Not too worried, I've got a XFX 380, and I just bought a Asus Strix 380x from someone here on the forum. Totally got backup cards that will play well in the meantime :P
I will definitely take a look though.

Update:
I dropped the mem clock by only 50MHz and it hasn't had any issues. I've started the RMA already, but I'm wondering if 50MHz is even much? I'm confused how so little could 'solve' this issue for the time being. I played Battlefield 1 for over an hour, and streamed it for good measure. The usage going up and down was a bit strange, but the fame had no lag and stream looks good. 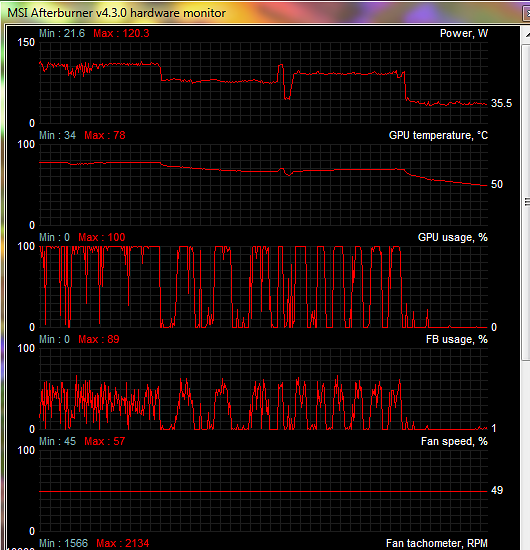 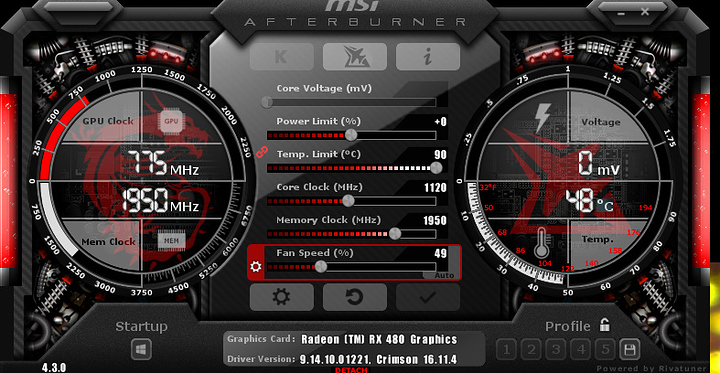 So, I guess the question is, is it still a good idea to RMA? I'm new to this card so I don't know what average use looks like, but this seems off to me regardless. Sadly I have to wait for a return on my RMA request, so hopefully that won't take long.

they advertise 1266 and if you cant get that on the card you should RMA.

For the core clock? Hadn't touched that, could try tomorrow.

cant get that on the card you should RMA.

Interesting. When I RMAd an MSI card it was through the shop I bought it from but they asked to explain the problem, and run a few stress tests just to make sure before sending it.

They might ask the same, in which case run the tests with no tweaks, but do say that turning the clocks down helped, it is still not as advertised.

If you are happy with it though, it looks like it will work for now. If it were me I would like a new one, don't really trust something that is new in box and has to be tweaked, second hand stuff sure but not new.

Edit: for the mad usage, my 290 read out the same under load. Something to do with power savings and how it uses the core, any chance it gets it will run slower it seems to save power. Does not effect games so it seems to work. That is just my experience. Any one else on AMD GPU get core usage all over the place?

I returned the card...

They messed it up so bad that apparently they cant replace it but are going to refund it instead, even though I'm pretty sure I requested a replacement.
At this point I'm not even sure I want it, least not from Dell (ironically, I work for Dell).

hm really? I still have my xfx 380 4gb and it runs great. But how much of a price diff is it at this point? Would I be better off waiting?

only the 1440 for gaming, others are just TV and this/chat lol
Honestly, the card I just bought from someone here on the forum is the 380x Asus Strix and its working fine. I want another 480, but wondering about my options or waiting?
I should also mention I do some video/photo editing, but this card seems fine for that as well... for now.

depends how much you are willing to spend normal ref and basic non-ref are about same price as other models.

I'd be willing to go up, but again idk if I should just wait.

Could you give me some Examples? I'm all about price to performance

I should checkout Jayz vid on that.

I'm also liking the tri fan design on the Red Devil
I'm thinking maybe I should wait till the day after christmas sale and look at these again, likely be better in price IMO