I-am planning on experimenting with Solarpanels to save some penny’s and have fun.

My plan is to make a small off grid system to run a terrarium off of and an aquarium.
Also maybe some emergency lights or small loads (phone charger and whatnot).

All this will be done in my shed and have one good wire running to my home.

Have any of you tried this before?

Also i wonder if a UPS could be inverted to be grid-tied.
DIY grid-tie inverter as you will. 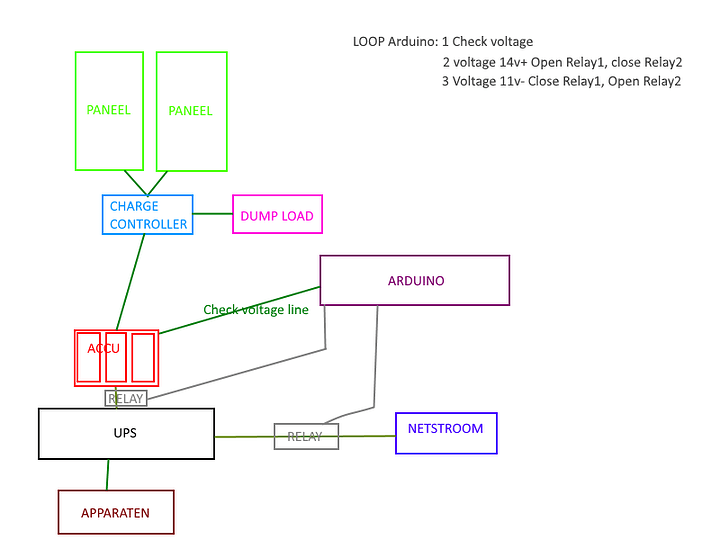 Another napkin drawing:
(note that a short transfer period between power sources is no issue). 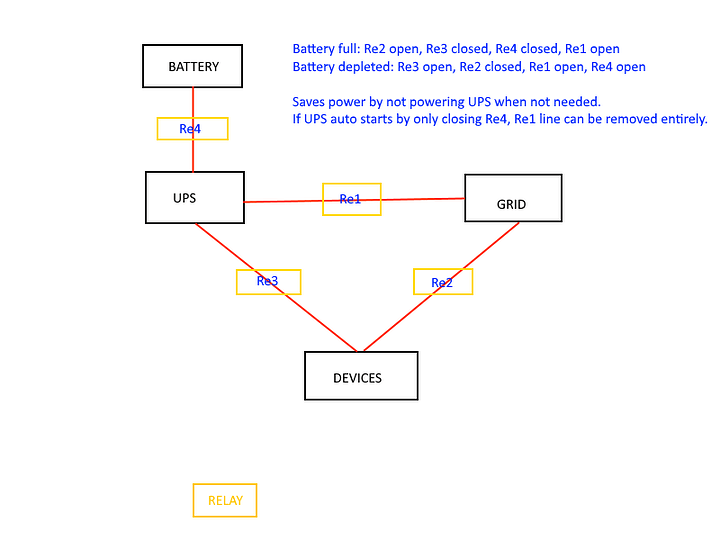 Will put some thought into this when I get home.

A grid tie system has to match phase with the grid or you’re gonna have a bad time. Also your meter has to be designed for this as well. I would not use car batteries because they dont hold up well to being fully discharged repeatedly, but they will work in a pinch. Also the type of battery in a UPS normally (AGM) is different from a normal car battery. They have a bit of a different charge pattern than the lead acid in your car, though this probably isnt a big deal. Otherwise your setup should work fine. A problem you might run into is the UPS might bitch at you if you use a relay on the batteries. Most UPSs are going to monitor the batteries and disconnecting them results in annoying beeping and it may even stop working correctly. I would leave the batteries hooked up to the UPS full time and parallel the charge controller with the UPS charging system. They will not affect each other. The solar setup would just become a secondary charging system.

Now if you were to turn off your main breaker and run your system hooked up to an outlet you could make the system work to power various things in your house. Only downside to this is if the grid comes back up you wont know until you try it. An actual grid tie setup wont work to power anything if the power goes out since its looking for an AC signal to match phase to. If it did work you would end up giving power to your neighbor and overloading the inverter.

A grid tie system has to match phase with the grid or you’re gonna have a bad time. Also your meter has to be designed for this as well.

This. I don’t know how it works where you are, OP, but where I’m at you need to have an inverter designed to tie into the grid (you can’t just half-ass this stuff DIY-style), a production meter and you have to get your utility company to approve an interconnection agreement. Each one of those is an expensive pain in the ass.

To be honest, I usually work on grid-tie-only systems (no batteries), but imo if you’re doing this as a hobby you’re better off just making it with batteries and an inverter to power your stuff. The grid interconnection (as has already been stated) won’t help you in a power outage. In fact, the array will likely shut down completely to stop power being pulled from the grid. Inverters here I think are required to have rapid shutdown, which means they have to shut off the power completely within something like 2 phase cycles (on the order of milliseconds). The array is then useless until the power comes back. You’d need another standalone inverter to manually switch over to that just delivers power from the batteries.

Each one of those is an expensive pain in the ass.

Where I am in the midwest, the power company (ameren) didnt charge me anything for a fancy new meter for the job. I dont have a grid tie system but it wouldnt actually cost me anything (minus the grid tie equipment) to set one up with the power company. I switched to an hourly pricing system and the meter came with it. I ended up just building a very small self contained emergency solar setup, mainly for charging phones and some lighting.

@Adubs Thank you for the grid tie explenation
grid tie is a non option for now.
All my lights are on a seperate breakerso i could power all the lights in my house with this right?

Now if you were to turn off your main breaker and run your system hooked up to an outlet you could make the system work to power various things in your house.

I’ve gotten a little surprise opening up the UPS.
It has 4 12V battery’s in series.
That means the unit works on 48V battery packs.

Now that’s a + on efficiency but not what i was expecting.

Which of these do you guy’s think is best suited for the job?
https://nl.aliexpress.com/item/48V-20A-with-External-Fuse-PWM-Solar-Battery-Charging-Charge-Controller/32772669392.html

The way I would go about it is to make a double prong (male) power cable and plug one end into the ups and another end into a wall outlet. Turn off all unneeded breakers making sure to include your main incoming breaker and power the system up. You’ll need to verify your loads before doing this of course. This is, what we call in america, the ghetto way of doing it. If its just for emergencies it should be fine. You’d be using your existing panel to distribute power as if it was the grid.

If you wanted to do your lighting in a more permanent solution I would recommend a small sub panel you can wire into with a DPST relay you can manually operate. That way you can switch between grid and solar.

Which of these do you guy’s think is best suited for the job?

I dont like these chinese PWM charge controllers because they like to lie about their actual capacity. I would not trust these things at a full 20A but you can use either one of these probably. It would be better to invest in a decent MPPT controller but at best you might gain 20% in efficiency. For an experiment these will probably be fine for say 10A maybe? The panel setup you go with will really be the deciding factor. 125W panels will usually never actually output 125W unless its a really sunny day and you have a solar tracking system.

I can go into more detail if youd like about how I would set them up but it seems like you understand most of the theoretical side and just need to know more about practice.

I’ll take the counter point and say that I love the ultra cheapo PWM charge controllers for small scale solar. The cost of a high end MPPT charge controller doesn’t justify the small increase in performance. A cheap controller or two plus an extra panel can end up being cheaper and yield the same power output. If the cheap controller dies then get a new one. The extra panel will put out energy for decades, so it likely won’t need to be replaced. Even the high end charge controllers aren’t made to last as long as the panels do, and for small scale, ground based, off grid solar it can work out quite well with the cheap stuff. For other setups the quality MPPT controllers start to make a lot more sense.

I just got my panel set back up after taking it down before the hurricane hit last September. I’ve had it going for maybe 4 years and it hasn’t given me any issues. I do agree that you probably don’t want to push a cheap charger to its limit. I have a panel that does ~9 amps on a 30 amp charge controller. It survives even with my shed getting direct Florida sun. When I move the setup later this year, my shed will be in the shade to reduce heat. If you are pushing it at more than 50% and it sits in a space that can get quite warm then you may want to look at mitigating that heat.

It would probably be more energy efficient to avoid using AC where possible. Anything using a wall wart or other power supply is just converting AC to DC, so going DC>AC>DC will waste energy in the conversion. For lights, you can get those LED strips and they rain down light. I cut a small PVC pipe in half lengthwise and spaced apart sections of LED strip in there as a makeshift droplight. I have it hanging in my garage running off AC, but can also run it off a car or solar. It is really handy and those strips are really cheap. I have some in my shed running off solar 24/7 and they seem to hold up well as long as you don’t smack them around.

I’ve been looking into a couple of things but now that the UPS is 48V i’d need expensive battery’s.
So i might just get a grid tie inverter as in total that’d be cheaper.

And these are the specs on the panels.
They should work together right? in parallel.
I might just buy 4 or 6 panels. 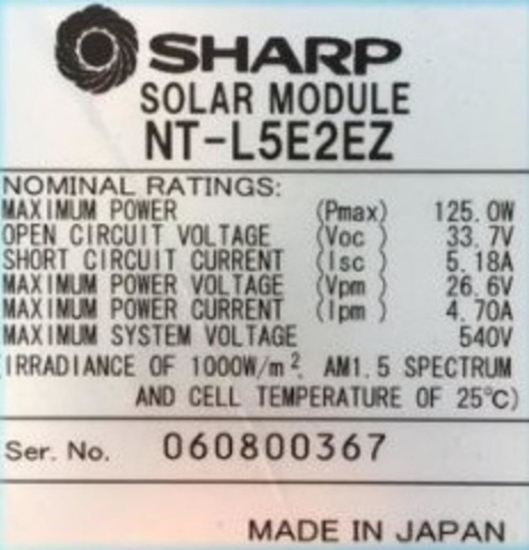 EDIT: After a little research, up to 600W i can just plug into the wall without issue’s (use a breaker without heavy equipment of course).
Above 600W the law requires me to alter my fuse box. (Don’t feel like doing that because i-am renting).
So that means i can only support 5 panels (Max troughput will be 625W) i don’t see that 25W being a problem.

Check out the brand powersonic for cheap agm batteries

I think i leave the whole ups thing behind and go for grid tie.
I was not planning on spending more than 400,- on this project (it’s more for fun really)
Power outages or brownouts are really not an issue in the Netherlands.
Still got a 1960VA UPS for 30 bucks which is nice.

Those battery’s are cheap indeed.

Dont forget you need to talk to your power company and find out about your power meter and what you need to do to grid tie. You might be good to go already but cant assume.

You could still do like I did and make a self contained system. You shouldnt have to follow any codes or laws if its not hooked up to your power system in any way.

yeah placing the panels has some rules and the invertor must be placed inside the complex the panels are placed upon.
Max 600W.
<600W is allowed to just plug into the wall.

Power meter is an old fasioned one. (perfect really. the power company’s really want to get rid of them but the consumers dont)

Didn´t know there was any debate weather or not the powermeters were to be changed (Germany here, close to NL border^^) . I think one of my neighbours has a new fancy-ish one, everyone else still has the “analog” spinning disk one.

Ha funny i-am close to the german border.
I have indeed also got that analog spinning disk one.

Nice project.
It’s a good start if you want to expand more.

Look at this guy.
Peer-To-Peer Energy: A New Way To Access Renewable Power

I wouldn’t tie solar to electric heat, and thereby to the lives of animals in the shed. Heat is a lot of power

but which grid tie inverter should i get for these panels?