So now you are not even allowed to spend your money

"Swedish payment service provider Payson received an email stating that VPN services are no longer allowed to accept Visa and MasterCard payments due to a recent policy change. ... The new policy went into effect on Monday, leaving customers with a two-day window to find a solution. While the email remains vague about why this drastic decision was taken, in a telephone call Payson confirmed that it was complying with an urgent requirement from Visa and MasterCard to stop accepting payments for VPN services. 'It means that U.S. companies are forcing non-American companies not to allow people to protest their privacy and be anonymous, and thus the NSA can spy even more.'"

it's funny how for years we have made other people be in charge of our money and now they are taking control.. if there is anyone to blame is ourselves, meanwhile our governments spend in whatever they want without even asking us.

I think this sums it up 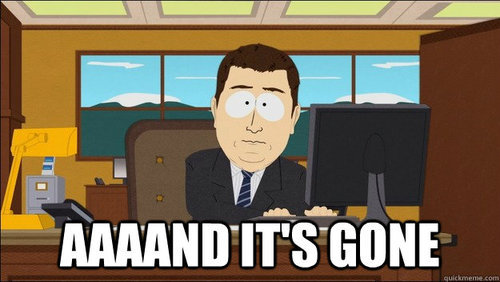 Interesting, yesterday was a mixed package as on wikileaks: "MasterCard breaks ranks in WikiLeaks blockade." (Use of google will find you plenty of articles on it)

I think that's absolutely nuts, and the fact they are doing it is a severe breach in trust

I think it's well time that companies looking to provide services without being manipulated by the US Government and their Secret 3-letter Mafias start registering their organisations in countries that don't give a fuck about the US political system.

Think how much better we'd all be if these big internet companies were not under US jurisdiction.

I wasn't aware the money spent through a credit card was in fact yours to begin with.

Visa and Mastercard offer debit cards through banks as well, remember that.

I wonder if this explains why I haven't been able to use my MC/Debit to buy stuff from say MSFT, NOA, or Sony's inhouse online stores? Going through the whole process to have a <$1 transaction FAIL is rather annoying. It's not like they're blocking my more...interesting payments. :-p

I love that we are slowly moving towards living in a Phillip K Dick short story. This way I don't have to read anything....reading is hard...

This, and alot of people use pre-paid debit cards from visa to anonymously pay for VPN services.

You guys can always just buy some service, like a game server or website host that will allow connecting to them via ssh and tunnel your traffic through them.

Indeed, this kind of action can, and will inevitably cause severe problems in the future