So my Northbridge is charred

But I'm still able to use my computer.

Anyone have spare parts laying around I could get? :P

My CPU is fine, but I really just need a motherboard that supports DDR2 and is socket 775 and supports the Core 2 Duo 6600.

I would have said to take a photo of it but you already stated that in your post.

I'll disassemble it in a few hours and get pictures then for proof.

Probably some kind of residue that was on the chip that was burned with the heat. It was probably never exothermal, because that would probably have caused enough immediate heat to kill the chip too, so it's probably slow oxidation of some kind.

The NB, that's the memory controller and stuff right? I can imagine it getting really hot if there is a lot of low voltage memory plugged into the system, and that there would be a dead spot in terms of airflow just above the NB, but the question still remains what was burned on that chip. Now provided that there was actually an airflow dead spot, it could have been dust residue that contained aromatics, like for instance oils or tobacco fumes, or proteines and a catalyst, like carbon particles and the proteines of bacteria and proteines from human presence in the room. That would cause the proteines and organic dust to slowly oxidise and leave a carbon residue, because it would not be evacuated by the airflow stagnating at that particular spot. Anyway you put it, it means that the temperature of the NB is too high though, and that it needs a bit of airflow and maybe even a spreader.

As promised, A PICTURE OF THE DAMAGE. 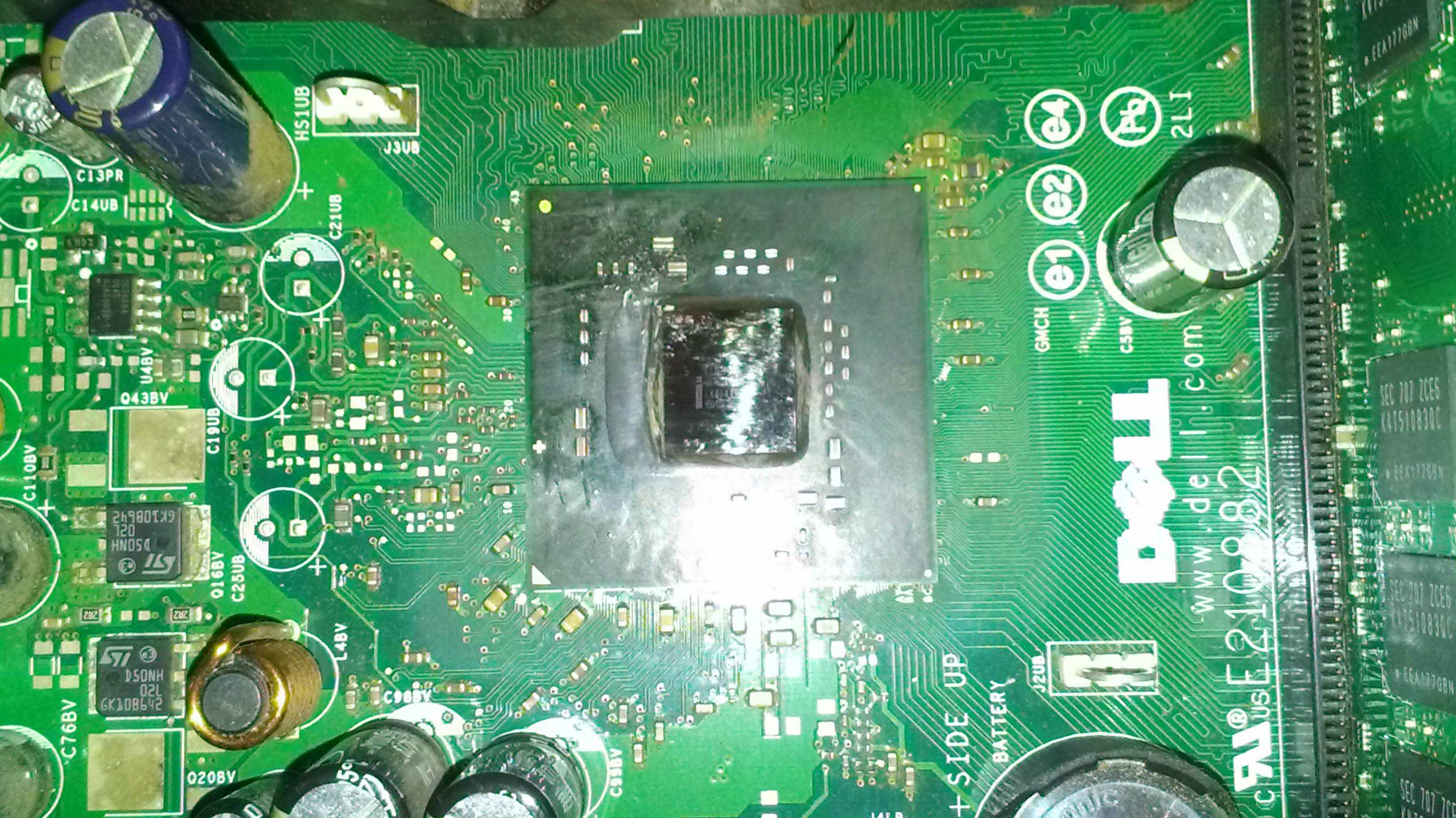 You can clearly see the discoloration surrounding the PCB of the NB.

I took like 80 pics but this showed the damage the best. Also, the die itself is blackened.

If you guys would like, I can also edit this picture to trace the burnt area surrounding it.

All I gotta say, FUCK YOU DELL.

There also was a heatspreader on it and when I tried removing it, the thermal pad was fused to the die, I spent about 45 minutes cleaning it to get it to where it is now. In place of the original thermal pad, I have replaced it with AS5 thermal compound for the time being.

As far as I can tell, the chip originally had a throughput of 200MB/s. And currently it now only tops out at 22MB/s.

Here's a trace of the burnt area: 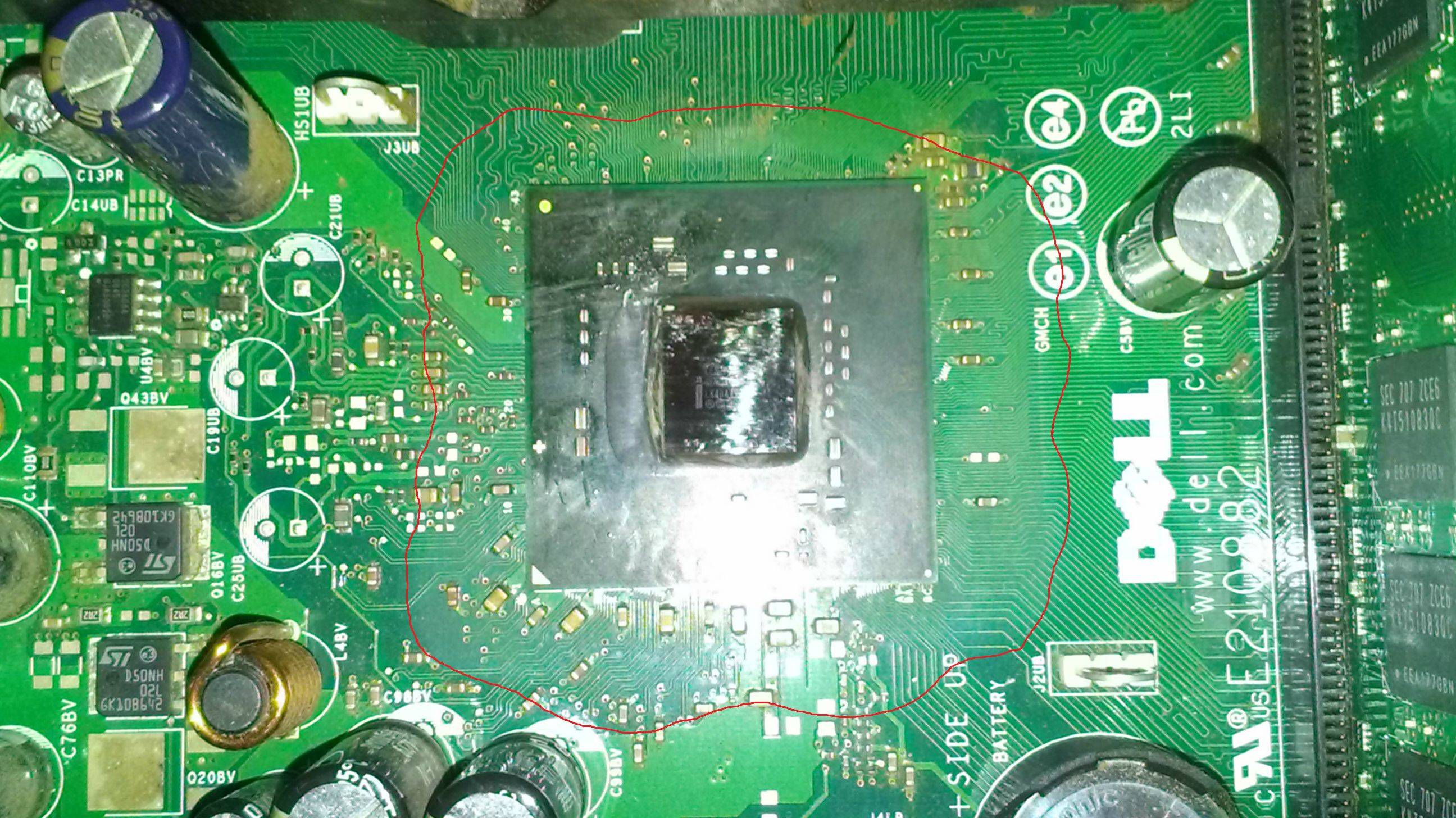 OMFG, there are gas expansion traces on the silicon!

There actually was an exothermal event. Wow, just wow, they probably just installed polluted TIM or bad TIM or no the wrong TIM, and it went up in flames. There must be collateral damage to other parts!

That thing could have burned down your house!

When I orignally took it apart and cleaned it, there was no dust in that area at all. I mean, yes there was on top of the heat spreader, but that was it. It was clean under that, minus the burnt area.

Fun fact, I'm still on the same computer as the pictured one. >__>

Speaks for Intel quality, there is even a large amount of residue on the caps, like over an inch away from the NB package, that must have been quite a burn. Your system won't die... probably all the tasks in htop are zombie tasks lol

Well... I can still 1080p game on this thing as is, but when I close the game my whole computer just visually locks for about 15 seconds.

I get to order a new one tomorrow! :D

Dude I'm amazed that thing still even works with how badly damaged it is.

If you were interested in holding onto your CPU just that little bit longer.

yeah your board needs to be changed. that chip is well beyond safe to use and will likley combust of pop very soon. so replace the motherboard asap.

I've been using this motherboard like this for the last 3 years or so unknowingly... SO YEAH...