So I got these from a company closing what should I do with them?

I got these from a near by company that by my guess did some kind of analog signal re-distribution.

They are 22 WinTV capture cards in a Magma PCI expansion chassis with 13 slots and some assorted loose cards including like 10 sound blasters.

I can honestly not think of a single thing to do with them now that TV has gone Digital these are useless for their intended purpose. 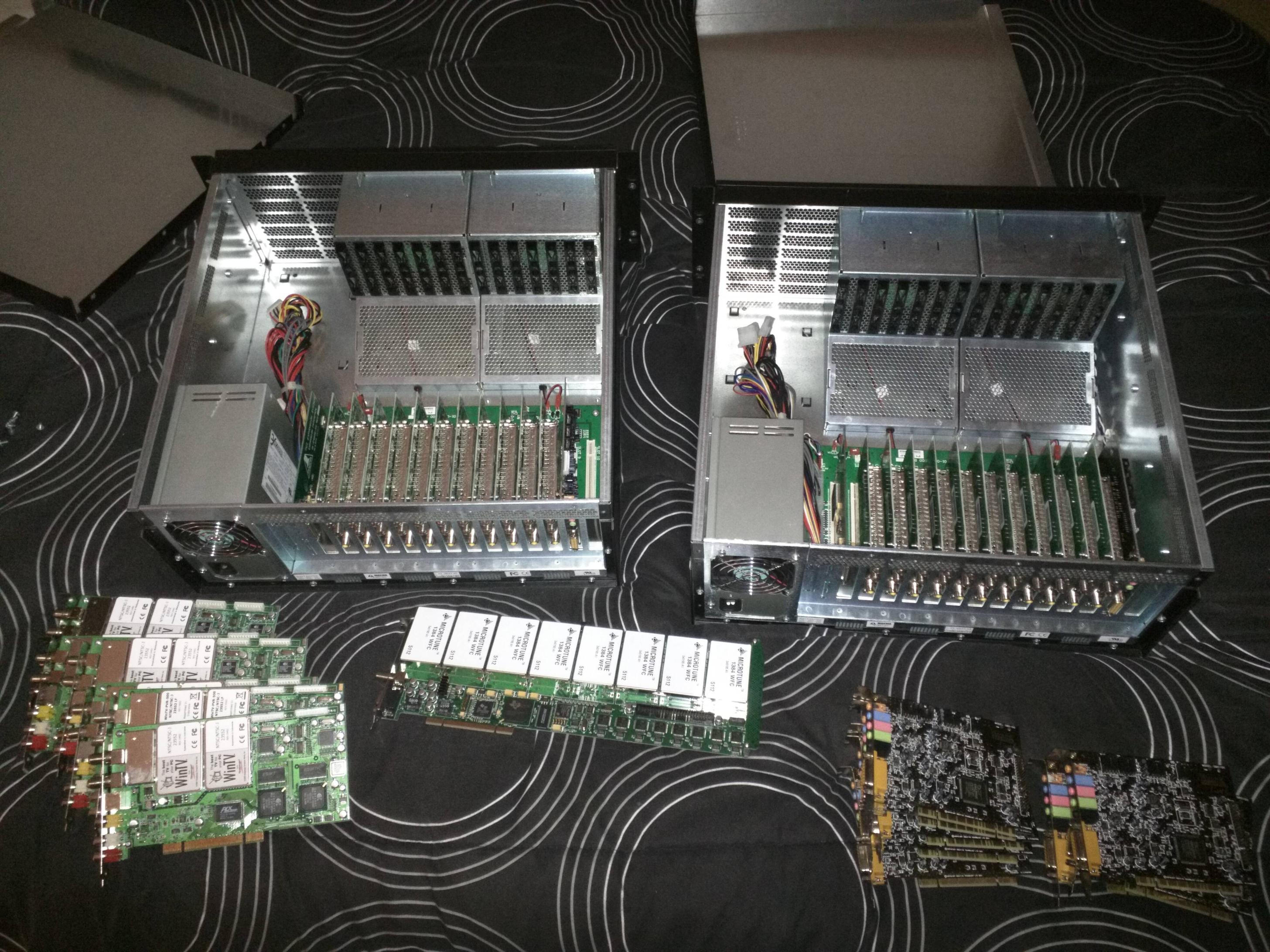 Could you ship one of the chassis over to me?

I can't think of why anyone would want these but you never know?

Personally I can't think of what these could be used for these days.

I wonder how far outside of the TV and FM ( and by FM i mean the radio dial. ) spectrum the receiver is able to capture. I am thinking the driver or the software might be able to be hacked and you could use it to monitor and or rebroadcast other transmissions like a police scanner that you could stream to the web.

You could probably set up a hell of a surveillance feed with those lol. Just grab a bunch of analog surveillance cameras and go all 1984 on yourself. Or, you could grab 20 PCI video cards and be able to run a 20-something monitor setup from your desktop : )

Honestly though, something like that could actually be useful for setting up a rotating live feed of some event or location, like say a festival or even a zoo/wildlife park. Just set up the computer connected to the expansion rigs to rotate through the cards, and broadcast the active video signal. Beyond that though, I can't think of much use for what is essentially a multiple expansion for a dead card format.

This is probably the best idea.

I look at this thread and it reminds me of the time I bought a pallet of obsolete computers from eBay for £300.

By some miracle I refurbished and sold one at £50. They were all complete junk. I count myself lucky to only have lost £250 and not the full £300.

Do yourself a favour and accept your first loss on all this junk. Luckily it sounds like you didn't pay. But even so, dealing with this is going to cost you a huge amount of time and effort, you'll spend forever trying to find some far fetched situation where this stuff is useful, and it probably never will be.

I was a teenager when I wasted all that time and money so it's all good now. I learned from it and got myself a job off the back of that knowledge. But if you have any kind of a job already, your time is too valuable for this crap.

PS. The sound cards are worth less than postage. Can't believe anybody would offer to pay postage for those. But I only say that because I myself had a bunch of those that came out of the PCs. It's easier if you throw one away at a time.

Those are the kinds of things I would look for.

Sound cards in a scale like that are VERY useful, you just have to think outside the box of "used to play sounds from your PC."

Where are you and these? I'd take one off your hands.