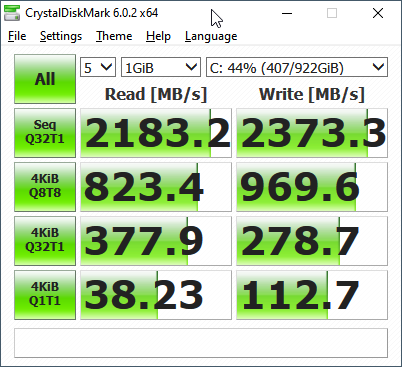 They’re not terrible but definitely not the full speeds or what I am seeing in benchmarks.

Has anyone seem the same with the SX8200 Pro?
ADATA doesn’t provide their own firmware/drivers and advises the use of standard Microsoft/Intel ones. I have seen some alternative drivers available for download at win-raid but I haven’t given them a try yet.

I have a 256gig version and it’s massively faster. Even with other things running in the background it’s at leas 3.2Gig…

I have absolutely no idea what is going on, but maybe something heavy in the background… But honestly I can’t bring mine to go below 3 gig…

I’ve monitored my disk usage in performance monitor and there’s nothing else going on in the background. Very bizarre.

What is your board? Your speeds looks eerily similar to PCIe 3.0 X2 speeds…

You said you cloned your windows instal? Why didn’t you just did a fresh instal?

I have near 500GB of data and thought cloning would be the faultless way… I will attempt a clean install next week, just ordered a NVMe to USB enclosure so I can backup data to my old NVMe drive before I reinstall Windows on the SX8200 Pro.

I have the same SSD; here are my values using CrystalDiskMark 6.0.2 (version 7 uses different benchmarks): 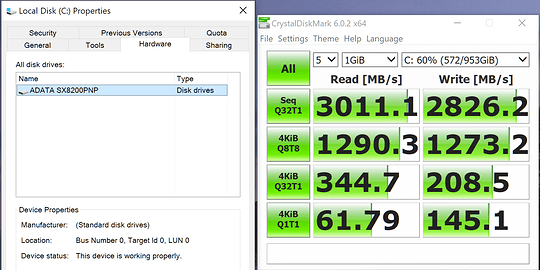 Did you perform a fresh Windows install or clone your old drive?

I installed a fresh windows.

Switch to AHCI mode and re-test. RAID is for using multiple drives as one. Though, you might really be limited by PCIe Gen3x2 if you have a laptop.

2 options that you can try, SSD optimization, if it doesn’t help defragmenting, defrag isn’t a thing you normally do to a SSD, but it does help doing it in some cases and although it will burn some writes it can be well worth doing it.
Please note, don’t defrag them weekly, or something stupid like that, defrag for a SSD is 1-2 times in lifespan option.

Turns out ADATA changed the hardware of the XPG 8200Pro during its lifetime. (Recent WAN show mentioned it.)
See also: https://www.tomshardware.com/news/adata-and-other-ssd-makers-swapping-parts

I believe I have one of the earlier versions.

Yeah they did switch, but to explain the changes
1)controller switch has been pushed by SMI every time SMI decides they don’t want to produce the old controllers and well the changes made are pretty small and SMI usually understands better what needs to be done than reviewers and end-users
2) there has been side-grading for NAND due to supply limits and from what I can tell all companies that aren’t directly under one of the NAND manufacturers are rotating and bidding on what they can get, ADATA has been avoiding to use Toshiba/SanDisk NAND on the models that haven’t come with it in the original specification, which IMHO has been a good thing as the rest of the NAND doesn’t really have such reliability issues