Just loaded the skyrim and while I can tell it looks better it's not that big of a jump and in 4K it is not letting me go above 40 fps. I am using a 980 but I can't believe that this game is that demanding. What's y'all experience been like so far?

Haven't loaded it up. From what I am reading on Steam, the SE version still doesn't look as good as modded OG Skyrim. The only difference I've read is a larger draw distance, alt+tab working correctly, 64 bit, and Rain Occlusion.

From what I am seeing, not worth playing just yet, because mod support isn't there, and the CK doesn't seem to work with it (meaning mods will be a while. Which is understandable considering that the modding community does what they do for free)

Downloaded it while at work, about to fire it up and see what's what.

Hopefully it'll be more stable with heavy modding, once modders get their shit to work with the remastered edition.

It seems to be demanding, at this point. I am using a GTX 1080 and there are dips here and there. It may take time for it to be a little more optimized with updates.

From what I've heard Bethesda still hasn't figured out how to not have the frame rate affect physics...

You got to be kidding me!

Well I will wait 6+ months for this game to have all the great mods it needs.

Yeah, I just wanted to see vanilla what this game looked and played like. I would def advise the community to wait a couple more months for mods and better optimization before playing this game.

Isn't that what people supposed to do when Bethesda releases a game at this point?

Pretty much. Doom and Wolfenstein were good to go if I recall correctly

I'm getting a lot of FPS variation too, the V-sync always kicks in and halves my FPS all the freaking time. There are notable graphics features that would otherwise be so demanding on an ENB for the original though such as Ambient Occlusion. The temporal AA is a great addition too, cleans up the image really well, it makes the image softer, but not blurry like FXAA. The Z Fighting issue with the mountains in the distance is gone now too with a much better draw distance too, no need for LOD mods. 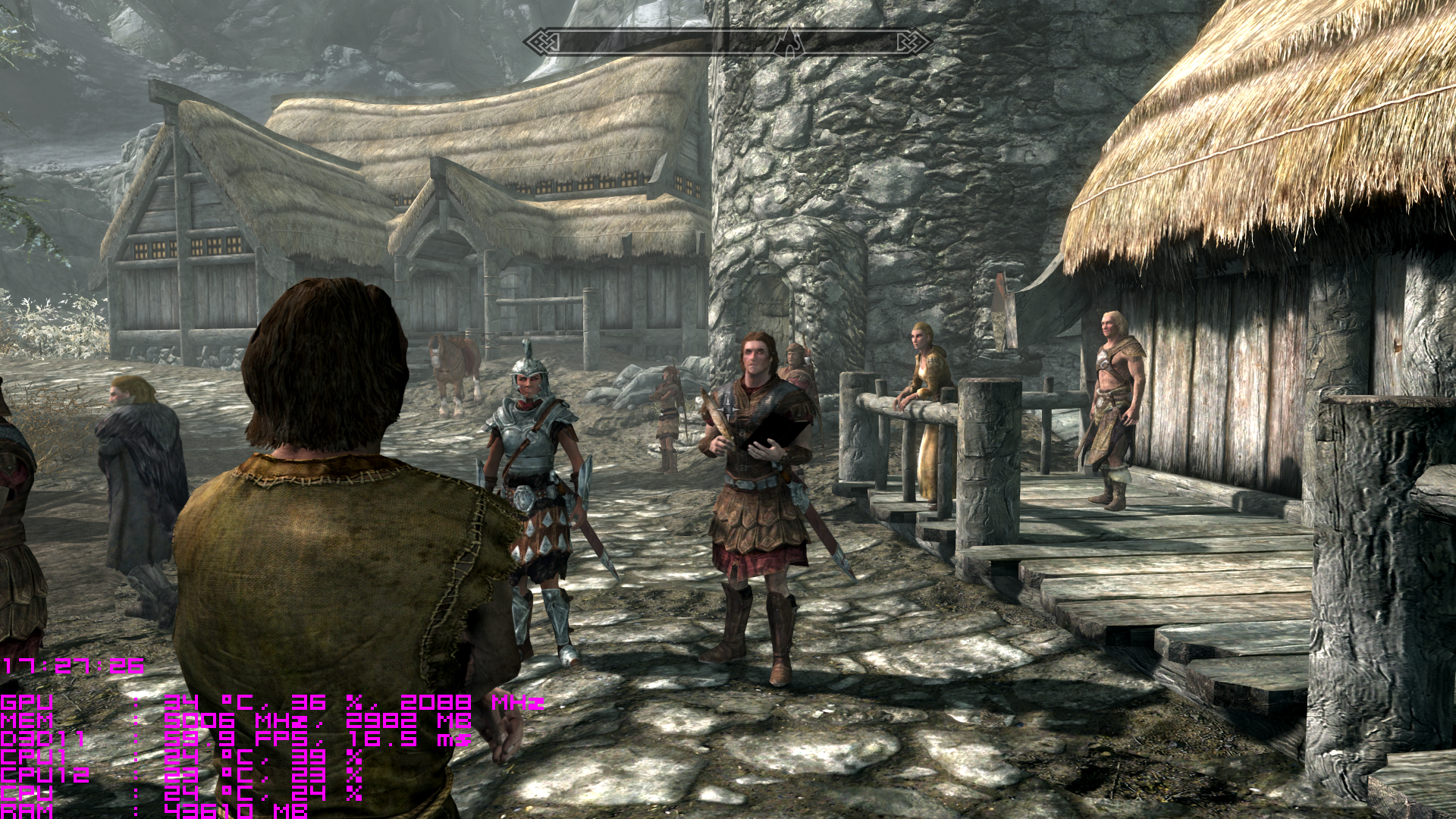 my only complaint sofar
I MISS MY SKYUI

Only because they were released by id software. Those guys are tech wizards that love and respect their craft.

Does TAA make that Vaseline effect when moving like what FO4 did?

lol.
TAA in Fallout 4 was pretty good in keeping the jaggies tamed while standing still, but once you start moving, it was just blurry madness, thus vaseline effect.

I'll post a video of it so you can judge for yourself.

It's not as bad is Crysis 3's SMAA 2TX option, as matter of fact, IQ wise it's clearer.

Environment wise the world looks waaaay better than vanilla skyrim back in 2011. The textures for npcs still look like crap. All in all though I'm very happy. Looks visually as good or better that a lot of people's modded skyrim (subject to opinion) and it's all super stable. Very excited to see the mods to come with 64bit