Hi there greetings from the UK! Regular l1news viewer since Logan was Wendell’s Mrs😎 anyway to my question I have recently had to start life from scratch again and at present my only device capable of interwebs etc is my phone which is some bullshit mediatek stk thing but I have now acquired a TV and want to get a single board computer to turn my TV into a smart TV/ web browser/ media centre etc as a stop gap till I get something we a graphics card. Question is there’s loads of the fuckin things so what to go for? Oodoo rasbery orange or banana pi? Roku box tinker board? No clue here is like to be on windows android or Ubuntu in that order spend as little as possible but best possible bang for my pounds. I saw something about Vulcan being ported to pi and possible gaming on an SBC intriguies me would like to be able to add peripheral s too if possible can anyone advise? Thanx xx

I saw something about Vulcan being ported to pi and possible gaming on an SBC intriguies me would like to be able to add peripheral s too if possible can anyone advise?

So on systems like the Pi, your best bet would be retro gaming and emulation, simply because to play windows games and whatnot, you’d need an ARM build for whatever you want to play. See, most (windows) games are only built for x86, which would require full CPU emulation, which ARM is not good at

Yeah I get the difference between RISC an x86/64 but a guy I know who’s into 3d printing uses SBCs for multitude of things tells me there’s an arm build of windows called RT I think and also x86 SBCs from oodoo or something close but really it just comes down to cash as in I have little so trying to get the most capable thing I can thinking SBC or Roku type thing. He also told me Linus managed to plug in a GPU to an SBC but I can’t find the vid at moment but looking hard anyway thanks for your time an leniency on the other bro

Regarding the x86 boards, I don’t really have a ton of experience with them, so I can’t comment, but Explaining Computers on youtube has great overviews of a lot of SBCs, including some x86 ones, I believe.

Do you have a specific budget in mind? Because a used optiplex on Ebay might actually be a better bang for your buck.

Well, it’s ~125 US. I would definitely check your used markets.

Find many great new & used options and get the best deals for Dell 3020 Optiplex Intel Core I5-4570 3.2Ghz 8GB Desktop PC at the best online prices at eBay! Free shipping for many products!

Obviously, that’s a bit above your price range, but you might be able to find something similar in your local market that’s slightly cheaper.

Wow that’s actually cheap as chips posted to me is a further £95 us though and the second hand market in the UK is full of people wanting romantic prices for “gaming” pentium 4s and other such dross but that has inspired me to look a bit harder though as something like that would do aaa games we a new PSU and a card yes? Even hack the standard PSUs molrx and data lines into a 6 or 8 pin…wouldn’t be the first time…btw is unlocking cores still a thing we and? Used to have a dual core phenom 2 black edition that unlocked to a tri… Still work we Ryzen?

something like that would do aaa games we a new PSU and a card yes?

I don’t remember what the PSU has on it. It definitely has SATA power, and probably a 6 pin PCIe, so you should be able to get a modest GPU working in there. Something no more powerful than a 1060.

Used to have a dual core phenom 2 black edition that unlocked to a tri… Still work we Ryzen?

I don’t know of any Ryzen CPUs that you can “unlock” more cores on. I do know of some people getting 1600’s that had 8 cores, back when first gen was coming out, but I think that was just a mistake batch. AMD must have had some really good yields, and either mislabeled them or forgotten to fuse off the cores.

Wendell and Co actually did a video early on in the L1 days on upgrading optiplexes to make a formidable gaming rig: 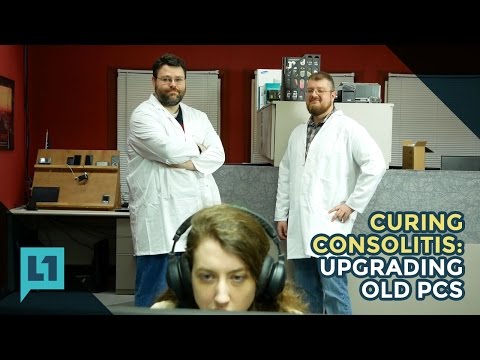 I’ll watch that now thanks. Also been told a pinebook is cheap and punches above its weight but not checked em out yet intact I’ll take a look after this vid…any knowledge of them?

Also been told a pinebook is cheap and punches above its weight but not checked em out yet intact I’ll take a look after this vid…any knowledge of them?

The issue there is they’re a very long lead time, and ARM, again.

It really depends on what you want to do. You mentioned you have interest in gaming, so I’m recommending you stay away from arm. If you want the pinebook pro, it’s definitely a good laptop.

One of our members owns one, and both a first-impressions and a long-term review on it. Here’s his 6-month update:

If you haven’t read the first part of this odyssey, please read here. So I’ve been using the Pinebook Pro for approximately six months now, so it’s time for an update! Software First and foremost I made the switch to Manjaro and I don’t regret it for a second. I’ve had a preference for Manjaro and other Arch-based distros ever since I first tried Manjaro a few years ago. BSD isn’t my jam for whatever reason. Anyways, Manjaro has been nearly flawless. It installed without a hitch, and the normal Manjaro stuff is there. It feels and acts almost exactly how it would on an x86 device, so if anybody already knows Manjaro they could jump in with minimal issue. The normal terminal commands I use (e.g. $ pacman -Syu for updates) work as they should as well. [image] There are some funky software things I’ve run into. For example, I got KiCad to work with zero troubleshooting, but I can’t get Discord working for some unknown reason. Not sure why. Aside from that I’ve used Libre Office, GIMP, and VLC with success. No weird settings menu crash in Chromium either

It looks like one could use Blender too. Physical Well, to be honest, my opinion hasn’t changed much since my initial impressions. It’s surprisingly solid for how cheap it was, the screen is perfectly fine, keyboard is functional, and the trackpad is iffy. I’ve totally dropped this off my couch at least once and it’s suffered no damage. I’ve also tossed it on my bed a few times with no negative results. The only thing that has happened was one of the speakers popped out when I was opening up the laptop for the first time, which easily could have been my fault. The speakers are just glued in as best I can tell, so I simply pushed it back into place and it was back to normal. [image] The screen I can tell isn’t a super high grade fancy panel, but it’s a hell of a lot better than many TN panels I have used in the past. Colors are meh compared to my nice 27” 1440p 144 Hz IPS HDR blah blah blah monito…

I’m sure he’d be happy to answer any questions you have about it.

Oh, and it’s worth noting that you’re required to use Linux or BSD with the Pinebook Pro. Windows ARM doesn’t have support for it, last I checked.

Ok nice one thanks for your help you’ve given me a few bits to think over so I’ll go watch that vid an may catch up we u later if you’re round. Cheers

Sounds good. I’m usually around during US daylight hours. It’s 1AM for me, so I’ll be getting some sleep right about now.

There’s this UK liquidation hardware company I know of https://www.bargainhardware.co.uk/

Offers are not as good as in the US where there’s a lot more hardware source-able from universities, bankrupt companies and hyperscalers, but they’re usually better than ebay+shipping…
Most of UK stuff is end of life hardware - but still more capable than a Pi if you can spare the electricity, the space and the noise.

edit: just checked the site, they seem out of stock on old cheap sandy bridge stuff and haswell+ goes for like £250 configured… and that point, might as well build assemble a lot more modern ryzen APU (e.g. might look at skinflint.co.uk for prices from random places)

Pi4b especially the 8G ram one, kitted out with an SD card for <£100 is not a bad deal for a general purpose home backup server/router/kodi machine or a bootstrapping computer… but forget about windows and gaming.

I’d second bargainhardware, had some great used stuff off them at good prices, and they are more trustworthy/less sketch than some random EBay seller.

@Adrian_Johnson you might check out the website for CEX, the high street second hand shops, at https://uk.webuy.com/
They tend to overprice some things, but have all sorts of crap there, some reasonably priced, some over priced

Right then I have good no great news I was asking about a basic computing device as cheap as possible but with as much capability as could be squeezed out of my initial tiny investment well great success! I came across an outdoor market on my travels today and found a tech stall doing car stereos dvd players and smart TV boxes I got into conversation with the gaffer told him my wish list and he pulls out this bewtee! 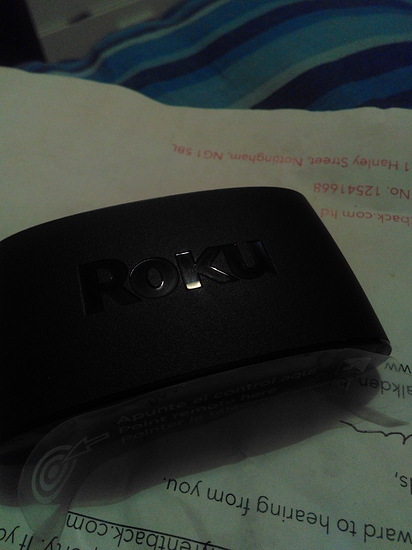 but here’s the vital statistics Roku 3930x quad core arm cortex a53 and 512mb ram brand new still got the plastic rip off strips on but no box so we get to talking and that and he tells me what these things are really capable of after I told him I once unlocked a phenom dual to Tri core well apparently these Roku boxes have a similar hack for the ram the 512 1gb and 2gb all use the same ram module just partitioned as per model spec and for an extra £20 he’s gonna email me the unlock APK! So I paid him a tenner for the box and for the other £20 he’s given me a USB keyboard mouse and slimline dvd usb drive and will email me more ram later! I’m so chuffed it’s not real just gotta get usb multi plug and I’ve gotta full desktop pc for 30! As soon as I get the usb hub and set it all up I’m getting crysis 2 downloaded I loved that game and would love to play it through again. My last crysis rig cost nearly £600 an due to the march of technology and 5yrs of trickle down now I can do it for 30 what wonderful time we live in eh? Thanks to all who replied

Yeah, you’re not going to be playing Crysis on that, or really any games for that matter.

Rokus are for streaming content, nothing else. You’ll get Netflix/Hulu/Prime, but don’t expect it to be a “computer”.

? Don’t understand I’ve already got the disc drive keyboard and mouse I’ll download the ram in a bit as soon as I’ve got the adaptor I’m having a bit of trouble working out exactly what adaptor indeed though the holes seem to not make sense tell Wendell I want him a minit please I won’t take much of his time but I’m a bit confused right now…