I have some underutilized hw laying around in form of a i7 4790k and a ThinkCentre M73(SFF) that I’m only using sparingly as a pihole and vpn.

Plan is to fit the i7 and upgrade the 500GB HDD to a SSD and fit two new Ironwolf into the mobo.
This will not be a backup, mostly for playing with different implementations and OS’s. Aswell as serving my main computer with files, iso’s, and perhapps even steam library.

Initially I wanted to do a baremetal Proxmox install. Primarely I wanted to learn more about it. The setup would probably look something like this. 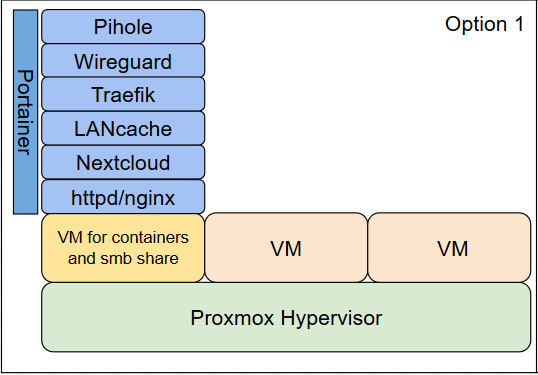 However I’ve learned from searching the web that network sharing may be a bit of a pain, and since unRaid have VM/container support it may make more sense to go with something like this. 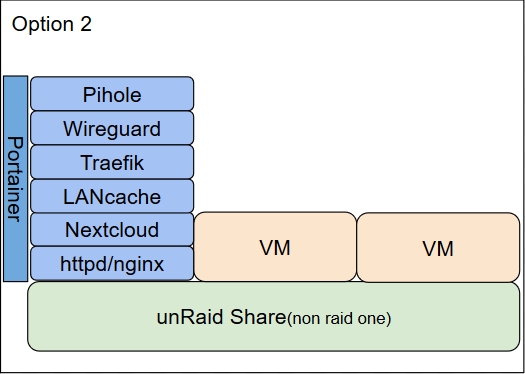 Container applications may be migrated to separate more permanent VM(inside this HW). Docker seems more applicable before setteling on a service.

This would be the first time I really play with any full virtualization. I’ve got some experience with docker(and compose). So please do tell me if I’ve done some bad thinking when designing.
I also imagine that I will run into issues running some of these services paralell. For example maybe LANcache and pihole since they both handle dns requests.

Thanks in andvance to anybody who gives input. And have a wonderful weekend everybody.

As one who uses Proxmox, I think it’s a great place to start in getting your feet wet in playing with virtualization. It doesn’t really requirement much to get setup and there’s a pretty decent community behind it.

I say this as one who hasn’t actually installed/used unRAID, only seen it in videos: I feel like unRAID has a lot to offer, which can be a little daunting, whereas Proxmox kind of focuses on just the one thing, virtualization.

As for the containers, Docker’s not going anywhere anytime soon in terms of adoption. Something else about Proxmox that I like is the ability to run LXC containers side by side with the VMs, which can be useful for some services (like wireguard). Playing with both LXC and Docker would be good to see which one really fits the need for you. I’ve found LXC useful for running “server” type applications (like DNS) and then having things that are run with Docker be more consumers of those “server” applications/services. Just one way to do it/opinion, not a dictation.

Thank you very much for your response. LXC containers is something I did research only briefly yesterday, and it sounds sensible to do as you suggest.
Proxmox would also make sense for a server(replacing three) at work that I would be allowed to setup myself. Playin around, possible break and making it work at home first would be a great learning oppertunity.
I did watch some really nice tutorial series on proxmost yesterday aswell, and one question is still unanswered (though maybe obvius for those in the know).

Is the highest tiered shares (datacenter iirc) that every VM and cluster below can access also availible or possible to share on the entire local network? Similarly to how a samba share would work. Here I would like to put things like iso’s, backups, and other utilities availible for my main PC aswell as the clusters/servers.

It would be neat to have a few shares availible for when I have friends over for LAN stuff, but also ofcourse have protected shares.
Managing all of them in one or perhapps two places (1pub, 1priv) would make things more streamline and easier to manage.

Can you clarify what you mean by:

Is the highest tiered shares (datacenter iirc) that every VM and cluster below can access also availible or possible to share on the entire local network?

I’m not 100% what you mean there, so I’ll take a guess. I’m under the impression that you’re asking whether or not the nodes in a Proxmox datacenter are intended to share the same network (ie, each Proxmox node can talk to the others). To that, I’d say maybe take a look at Proxmox Clustering as maybe a good point of reference. I myself I haven’t done any thing more than a single node, so I can’t speak from experience here. Let me know if I misunderstood what you’re asking here.

It’s also my understand that Proxmox itself doesn’t have a way to create/manage NFS shares, rather it’s generally a consumer of network storage. If you’re looking at for network storage options, I’d likely say take a look at TrueNAS. They actually just recently released their 12.0. They also recently announced their TrueNAS SCALE project which is their take at running the equivalent type of software on Linux (vs FreeBSD, which TrueNAS Core runs on).

Sure thing.
I found this photo of shares. 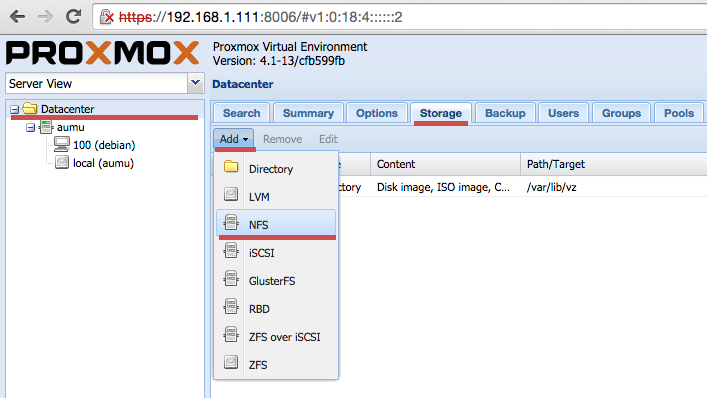 Making a share in that tier, would make it possible to share with all the lower tiers. However would I be able to share it with, regular devices on my lan not part of proxmox?
Subnetting inside proxmox or not should’t really matter. The way I want to do it is having the proxmox device on my regular lan. Then do a separation to the virtual enviroment besides possible bridning services I’ll run inside.

Edit, to clearify. I realize as I’m reading this again that making a service in proxmox that has access to that storage and within that setting up network share should work. My question is more aimed towards the possibility to share it on lan direcly from proxmox rather than as a subservice

You’re on a much older version of Proxmox than I am, so things may have changed but, AFAIK, that NFS option is to have Proxmox access an NFS share, not provide one. Meaning, you’d have to have an existing NFS share from another system that Proxmox can access.

Happy to be corrected here