I just want something simple and easy and also has a volume knob. I currently own a pair of Sennheiser 380 HD Pros and I have a Sennheiser 558 on order. I want something that is neutral but add maybe a bit of oomph and warmth to the sound but not distort or alter the original sound too much.

Could you potentially save up a little bit more?

If you could just go a bit more you could easily get the schiit magni and modi 2.

FiiO products are really shit quality and they do not sound great. The schiit magni and modi is really the cheapest entry level setup you could buy that does not sound like crap.

You could even get the magni now (the magni is the amp) and plug it into your mobo. And then later on you could add in the modi.

If you can not do the schiit stack, then I would consider either used gear, or an audio engine D1 or Aune T1.

Both of which are not the greatest in the world, but I do feel like they are better sounding and simply not as cheap as the chinese FiiO amps.

I've had the Fiio E10 for over 2 years now and the Fiio E10k for half a year. They both sound fantastic for the price point. You really can't find better for the price. (and yes, they do sound pretty damn clear and uncolored)

For what you're going to be doing, they will work fantastically. 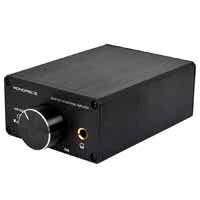 I use the Monoprice Desktop Headphone Amplifier personally. It sounds great and has plenty of oomph

I have a schiit stack and I really like them

+1 for the schiit stack. Easily the cleanest audio I've ever had straight to my ears and it's very well balanced, which is what I was looking for. The ODAC and amp combo from Mayflower Electronics is also really good from what I hear, but most people can't tell the difference between the ODAC+amp vs the schiit stack.

i have had the cheaper version of this (DAC Destroyer - without volume control) for over 4 years . Really love the clarity of sound from it, .

I am looking for DAC/headphone amp my self. I have Sennheiser HD558 in order and I am wondering what would be worth the money to power those headphones. I am not an audiophile, I just like nice, clear sound.
Schiit stack looks (should I say sounds?) great, but it is not as widely available as Fiio for example. Yes, you can get it from Schiit site, (but in my case) I would need to add minimum $60 shipping cost plus customs to $198 price tag. That's around $300 in total. On the other hand Fiio E10k would cost me $90 delivered. This bring me to the question - is Schiit Stak 3x better then Fiio E10k? Is it worth the extra money?

I have the fiio e10k. It really can't be beat considering the price. It sounds damn good and is only aprox $90.

It'll be perfect for those headphones.

No software needed, plug it in and let it do its magic. Works flawlessly and the price is right on point. Can't touch it with a 30' pole without spending too much money.

Anything noticeably better is going to put you into the >$200 range instantly.