Show me your "Spare" rig's!

*Preface: Attn Mod's! If this is the wrong spot, please move it where appropriate. Thank you.

Most of us here are probably IT professionals, or a least PC enthusiasts. It might be you are into software (coding, alternative OS's like Linux, etc.) or you might be like me and have a lot of older machines that you either inherited or just refuse to get rid of. In any event, let's show off what we have in our "Parts Department" or whatever you might call your spare parts bin.

I was thinking of getting rid of my trusty old i5 3570k a short while ago (even made a thread about it) and decided to just re-build it with all my spare parts and just use it as a TV gaming setup. So I am now presenting it to you, the community. I know maybe the PSU is overkill, and the case not that great (I'll be honest and admit in this situation my cable management is rushed.)

So here are the specs. Don't laugh, most of these things were freebies and the thing still runs pretty well, age aside. 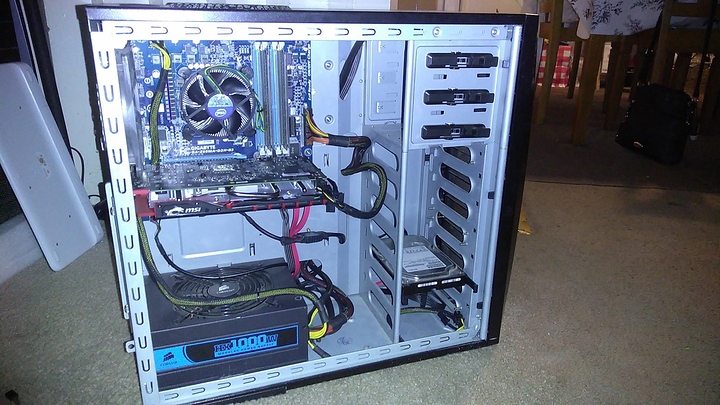 my "spare" is specced as such

all I need to do is plob one of my 390X's in it and I'd have a gaming PC better than most people.... I have money to burn me thinks

My spare is a suit case

OK, this makes me jealous. Good work! I'd hate to see your main! I think I just saw my spare computer run into a corner and hide from that Beast.

Yeah, man.... that's bad ass. I'm starting to feel like I need to step my game up here.

Here is one of my spares

So when @Atomic_Charge came up with the "Just Do It" March initiative I new exactly what I wanted to do (sort of), I am going to grab one of my many unfinished/ barely started projects blow off the dust and just do it. There is NO grand plan but finish it this month. This is by the seat of my pants so feel free to throw some ideas out or criticize the hack job I'm doing because this is just for fun. On to the meat and potatoes. I'll be modding a Corsair C70 to hell and back then slapping in a lga775 core 2 duo with custom water cooling. Down to Business, If your are still here thank you. The victim [image] First lets game plan [image] Cuttin time [image] all done, though the saw fence was too narrow so I'll have to fix the edges [image] Stuck the new window to the old and used a cutoff wheel and dremel to straighten everything out [image] Used the putty again to fix it to the side panel and drilled the mounts. It fits and looks great from ten feet away! [image] Look at that nasty edge from my first cut, glad this isn't my day job [image] There is so much more to do but [image]

I have a lot of rigs but I use all of them. I don't really have anything "spare" lol.

I'm honestly suprised I'm not broke, I'm a university student and my "spares"/backups are better than my friends primaries 0_o

I have a problem me thinks

What's with you guys having these little e3 Xeons? Did all the cool kids go that route and I'm the only dumbass who went i5? lol. Seriously, extreme props on your build log man. That's what PC building is about. Trying new shit out, making it work, and personalizing it. I'd rather have a old janky case (oh wait, I do, the Antec 302 was never all that great if I'm being honest) and mod the hell out of it over a "nicer" newer case. I'm just that kind of strange.

I'm the kind of guy that'd be happier driving a old Super Beetle in "rat-rod" like conditions over driving a brand new car. Older things seem to have more "soul" to me. And your build, man, that exemplifies it. 110%.

Hey mano, enjoy living it up while you can. And I hope you always can. I've actually been out of work almost 4 years so I have been barely saving $50 a month for my next big project. So far, it's not a huge priority. Rent (about $1500/month for a 1 bedroom apartment) eats up a lot of my "income" (basically a handout from my family, I'm a bit ashamed to say.) The rest barely covers insurance and regular bills. Just glad I have a Wife with a decent job. I wish she'd buy me some nice parts, but she DID just get some nice Tamaron (or is it Tamron?) lenses for her camera, and upgraded from a Canon 60D to a 70D (I don't know jack about photography.)

lol, went e3 because i don't overclock (heresy, i know) and for a bit more than an i5 you get hyper threading.

modding and painting that was fun as hell, toyed with ubuntu but the monitor i was using was a pain, no mount just flat on a table.

I'm with you. My MB is crap and I could never get my 3570K to hit any decent OC's because of it. Plus the Ivy Bridge Curse, with the crap-tacular TIM under the lid. I don't OC anymore, and if I had a brain in my skull I'd try for a Xeon. But being broke sucks.

Aww come on. I'm sure you have one rig that's at least a third of the parts are hand-me-down's or something. Right??

meh i didn't really need the xeon, the itx its in was supposed to be for Lan Syndicate 2 :.(

I'll just take pictures of all of my machines :P tomorrow

Well there ya go! It's a LAN rig! And Xeon in a lan rig is kinda overkill to me, but hey that's what makes it cool at the same time. As long as it works for you I say more power to ya, and play on! Now we just gotta get a LAN going for L1T. Somehow.

I've been pretty good about selling hardware that I don't use. Not much for spares at the moment. I treat PC hardware as rental. Use for about a year, sell and replace.

I do have a problem with a few monitors. I don't have packaging to ship them.

Nothing wrong with seeing hardware as rentals. Hell, if I was smart enough to do that I'd have a lot more cash in my bank account. lol. I understand about monitors. I have a few in my closet that I just kind of got landed with. A older Samsung 19" 1440x900 and a no-name I think a 3:4 monitor I inherited from my Father in Law. One day when no one is around I'll have to e-Waste 'em. I don't need a multi-monitor setup. a 21:9 would be good enough for me. Or at least better than my 8 year old Acer 21" jobber. Poor thing still has a "Designed for Windows Vista" sticker on the base.