Should I get an DAC/AMP?

I’m just starting to enjoy the magical world of good audio.
For my desktop i’m running a Roland RH-200s since I got it as a gift.
The headset is a bit old but sound beautiful.
Recently put on some new pads on them.

Yes you should most certainly buy a good Dac/Amp combo. Maybe you can find a used Schiit Modi/Magni for around 80 €. Both are in MK III incarnation so there should be MK I and II around. Audioquest Dragonfly series could be and option, or a Centrance DacPort Slim both fit in to your budget. I own the latter and use it at work.

just get a full interface instead, you’ll get better integrated components for the money.

I was looking at this one:

The E10K USB DAC Headphone Amplifier from Fiio is designed to improve your laptop's audio output quality via its PCM5102 DAC chip and is capable of handling PCM files in up to 24-bit, 96 kHz resolutio ... 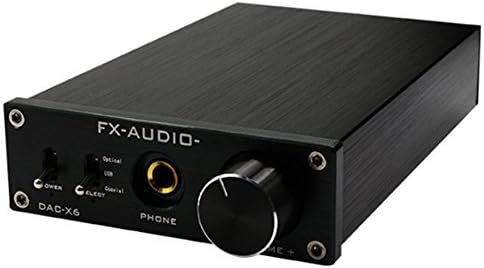 Do you have any experience with it?

FX Audio Dac-x6 is more feature rich but the performance is pretty lacking. Measurement and Review of FX-Audio DAC-X6 DAC (compared to Topping D30 and Fiio...

This is a (very) detailed measurements of FX-Audio DAC-X6 audio DAC and headphone amplifier. It also includes my listening impressions as usual. The FX-Audio DAC-X6 retails for just $58 shipped from Amazon...

Honestly I would put more money into headphones first unless your current source is noticeably bad. The difference in quality a good pair of headphones gives versus a dac/amp at the same price is pretty large.

The speakers themselves matter a lot more for quality. Then once you get to the more mid-fi range, usually considered $150-300 or so, a dac/amp might be worth it then.

I honestly find very little difference between my $200 schiit setup versus onboard audio, even with headphones like my HD 6XX.

edit: regarding other options posted here

Audioquest dragonfly series is popular where people only do hearing tests. It actually doesn’t really measure all that well.

I have had both the CEntrance DACport Slim and HD and both have a noise floor too high for my liking.

For an audio interface, most have DACs which are quite good. Headphone amps usually leave a bit to be desired depending on the headphone sensitivity and impedance though.

A friend of mine has a scarlet 2i2,
And he’s very very happy with it.

Scarlet solo would be more appropriate for you.

The second DAC you mentioned, the FX-Audio DAC-X6 is a really competent starter’s DAC, its easy to use, doesn’t cost a lot of money and can amplify a good deal of headphones.
I had one for a good while, used to amplify a Creative Aurvana Live! 2 headphone which it did really well, if you like balanced, clear and unaltered sound, you should like it a lot!
I’m a massive basshead this year i bought a vintage japanese Onkyo Integra A-817XD (a known “hot” amplifier, bassheavy by nature) since i also run a pair of speakers on my table, a Topping D10 DAC as well as a JVC Ésnsy HA-SR85S, that setup is my basshead nirvana!

Agree with @tkoham, you’ll get more mileage for the $ out of an interface.
Don’t be fooled by sample rate nonsense, unless you plan on editing at that sample rate.

As far as stability…
Focusrite is fine; MOTU and RME traditionally have very stable drivers.
M-audio for example, does not, though that may have changed in the last few years.
Take it for what it’s worth.

I’ve done some research on this last month. Generally people will recommend the Fiio as a budget option, but some guys, who seem to know what they’re talking about will tell you that Fiio is garbage and you should buy Fulla 2.

As an owner of a Fulla 2, I can easily say it has its fair share of quirks. If you don’t need al the functionality, I would stick with the Fiio E10k which I have also tried.

Fulla 2:
Doesn’t measure well, especially on the headphone amp.
Always develops a scratchy potentiometer.
Has no gain switch and often forces you to control the volume near the lowest points on the volume knob where there is noticeable channel imbalance.

Fiio E10k has a volume knob which just works a lot better as you end up using a lot more of the volume knob’s range. Also has much less channel imbalance and doesn’t sound as thin as the Fulla 2.

I’m also pretty surprised everyone keeps recommending audio interfaces as OP is unlikely to be using a lot of the features of one. Audio interfaces generally dont have great headphone amps inside either, so if sound quality is your priority then you should look elsewhere.

man y’all should really really be going for actual interfaces.