Should I get a mechanical keyboard?

I've been recently considering getting a mechanical keyboard now that I have extra money and don't need to upgrade any PC hardware. I've been wondering if it is worth getting one though. I've heard about all the benefits and extras such as macro keys which I mostly wouldn't use, but they seem nice. I do want to upgrade my keyboard though since im just using an amazon basics keyboard which I spilled tea on awhile ago and the side numpad sticks from time to time. What do you guys think? Mechanical keyboard or not? And if I should get one, which one? I've been thinking if I get one, it would be the K70 or the strafe, but I haven't seen many others.

Yes. I use a shine 3 with brown switches, its nice and heavy so it doesn't slide around, the letters are etched into the plastic not just painted/stickers and just feels like quality when you are typing on it.

If you want one, sure. They tend to be higher quality than most membrane boards, and IMO, are more pleasurable to type and game on. I'm currently using a red led K70 with Brown switches, and it's been great. As far as brands go, there's plenty out there that make quality boards. Corsair, Cooler Master, Ducky, WASD, Deck, Das etc. Decide what features you want (media controls, 10 keyless, backlighting, switch type etc) and then narrow it down to the brands that make boards with those features.

To be honest it depends on how often your at your computer. If you are on your computer often and consider it one of your main forms of entertainment then yes definitely consider it since mechanical keyboards, especially those featuring high quality switches and a solid PCB last a ludicrously long time (as long as you don't spill anything on them) and even if one switch fails you could go and buy a replacement switch for much less than the cost of a new keyboard.

There is also the comfort factor, unlike most rubber dome keyboards there’s some variety in switch types, each with their own distinct characteristics. Cherry MX Blue switches for example are very clicky switches with a tactile bump mid-press while switches like the MX Red or Black are very linear with no clicks or bumps (feel like they are on a rail). The most popular Cherry switch I believe would either be the Reds or the Browns (bump with not a lot of "click"). Admittedly I haven't used Topre switches and maybe they have some better offerings.

It does use the cheaper kail switches.

I can easily recommend a Filco after using mine for a while now.

But before you do that what switches do you like? Or do you know? If not do your self a world of good and get the switch sampler from max keyboards. It has the 8 main cherry MX switch types you will find in 98% of common mechs.

Edit: also if you are on mass drop check them out they get some fun and strange far away lands boards in every now and then and then they are a little cheaper too. Just keep an eye on if they are actual Cherry switches or something else like Khail? Or Gateron or other off brand switches. They are not bad but I would always go cherry first, then experiment.

The short answer YES i use a corsair k70 with cherry mx blues by the way... (would recommend the k70)

lol only pro for mech keyboards is the typing experience. if you type alot, AND have some spare cash, get a sub 150 dollar keyboard. anything more is ludicrous. i recommend browns, love em, but that might be subjective. head down to your local pc store and see if they have testers.only way to choose the right key is to try. i personally hated how light and non tactile the reds were. but again subjective.

tldr,
go to hardware store
ask for key tester
try all switches
choose one and ask for something within 150
finally haggle and profit!

Yes, personally I use a CM Storm Quickfire TK with cherry MX blues, heaven for typing and good for gaming :)

I don't enjoy typing on anything as much as I do on my Corsair K70. The best membrane switches in the world can't touch cherry's as far as I'm concerned.

I ended up getting one, don't think I'll get a mechanical again once this one breaks. It's a bit nice, but probably not worth the money overall. It was a razer blackwidow tournament edition, sitll might be the cheapest mechanical around, least it was at the time. I can type about 10wpm faster on it though. 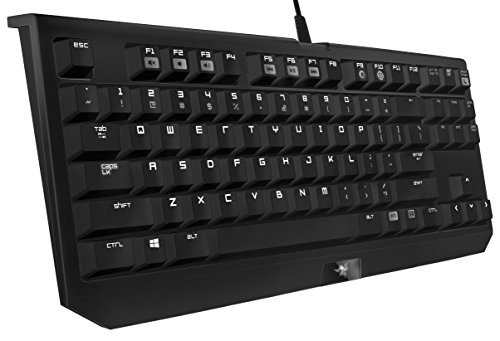 The Razer BlackWidow Tournament Edition feature the all-new Razer Mechanical Switches that have been designed from the ground up with the aim of elevating the speed and responsiveness of the Razer Bla ...