I am 100% new to SFP+, and I realized a server I bought YEARS ago came with what I believe are Connectx-2 cards. I would like to put one in my truenas box and one in my PC to get 10GB direct connection for photo editing and such instead of standard 1gbe LAN.

I have part number 0RT8N1 (MNPA19-XTR I believe) which I believe is a connectx-2, and I am trying to figure out the most affordable way to run ~20 feet of cable from point to point, and determine compatibility.

I think fiber would be best as its thin and can be easily hidden (I know it is more fragile), but I am unsure what ends I would need.

Would these work? Do I want the generic tranciever or the mellanox version? 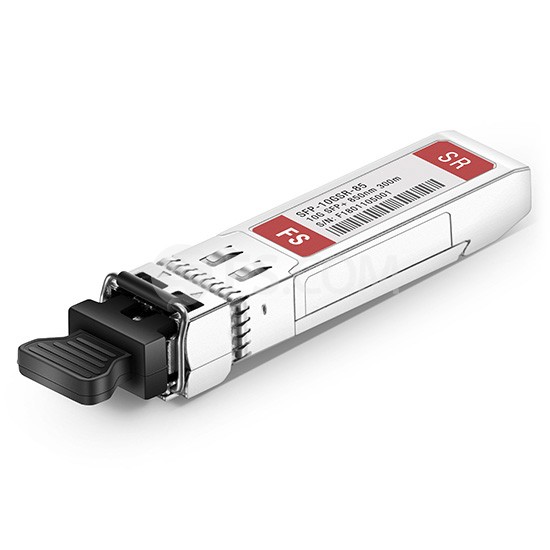 Because of its immunity to electronic interference and its greater speeds over longer distances, fiber optic cabling has become the conduit of choice for high speed network communications. Monoprice&t

Yeah, those should work afaik

And yes, I would go with fiber for a 20’ run. I’m not even sure if they make a DAC that long. DACs are mainly intended to connect things within a rack.

Yeah Fiber is the way to go. As a bonus it also helps electrically isolate parts of your network from each other.

For transceivers I save a load of money getting “finisar” transceivers from eBay. They are well under $10 each and work perfectly with my mellanox and Intel NICs, and Ubiquity and Mikrotik switches.

Yeah, those should work afaik

And yes, I would go with fiber for a 20’ run. I’m not even sure if they make a DAC that long. DACs are mainly intended to connect things within a rack.

Awesome. Any idea if I need the “generic” or “mellanox” version of the transceivers?

Yeah Fiber is the way to go. As a bonus it also helps electrically isolate parts of your network from each other.

For transceivers I save a load of money getting “finisar” transceivers from eBay. They are well under $10 each and work perfectly with my mellanox and Intel NICs, and Ubiquity and Mikrotik switches.

Hmm, I am not seeing finisar transceivers on ebay for good prices, I think the 20 dollar fs.com ones are actually cheaper, at least from what I am seeing.

Ah, are you in the US (where I am) or elsewhere?

I am in the US, but I am not seeing anything decent on ebay? 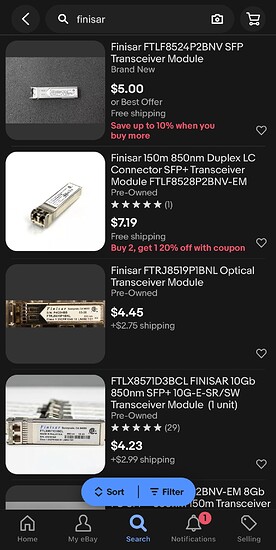 If so, I’ll see about posting some links when I get to my real computer.

I thought I was, but, I was putting “transceiver” after it which seems to have limited the results.

Any idea which one I should get? I am 100% new to all of this… I understand optics so I do know what 850nm “mean”, but I don’t know what it means as far as networking infrastructure goes, nor do I understand what the other nomenclature all is…

They should work in the connectx-2’s?

Yes the transceivers should work fine. The only gotcha is that the mellanox cards should be set to use the same protocol. Some of those cards can use infiniband, but you probably want everything to be Ethernet so you can ignore as much network bullshit as possible.

For the transceiver the magic words are

Finisar FTLX8571D3BCL: The make and model of the transceivers I use.
850nm: The optical wavelength, you can basically ignore this, I’ve not encountered a situation where it’s different given that the following terms are correct for what you want.
Multimode: Multiple light signals are sent on the same fiber. This is what you want for a home network.
SFP+: The physical connectivity form factor of the transceiver and NIC ports. There are others like QSFP, SFP28.
SR: “Short reach”, as opposed to LR “long reach” which is the range the transceiver can push to over fiber. For a home network you want SR.
LC: This is referring to the physical connector between the fiber cable and the transceiver. As opposed to SC which is much larger.

Another thing to consider is airflow over the NIC. They don’t seem to need much but they do need some (they were intended for screaming servers) so if it’s in a dead space consider putting a a little fan on it.

Thanks for the info!!!

I think I am going to go ahead and try and get this working, sounds like a fun little thing to do.

And yes, I usually put 40mm noctua fans on all of my PCIe cards in my servers to give them a little bit of cooling, although now that I am going to be almost fully populating my server with a quad NIC, this, HBA and SAS expander, maybe a 3d printed 80mm fan holder to just blow some air over all of them vs a bunch of little 40mm’s may help to save space…

Mellanox aren’t picky. What you described would work.

Another thing that may work at such a short distance is DAC (copper cable that plugs into SFP+ without any optics at all).

I think AOC is the cheapest option if I’m reading this correctly.

+1 - I’m currently using some FS (fs.com) generic and Mikrotik 10GBASE-SR SFP+ modules on Mellanox ConnectX-4 cards, used more in the past, no issues.