Searching for 2U PSU

I’m looking for a PSU for a computer sitting in a 2U chassis. I have a spare Seasonic PSU that I would use but the fan would be mashed against the top or bottom of the chassis. Can I have some recommendations for PSU with rear exhaust fans?

Edit: I do need a 24 pin main connector and 2 sata connectors on 1 cable and at least 1 on another.

Look at the SFX form factor PSU’s. Example: SilverStone SST-SX500-G V1.1 (500W) or ST30SF v 2.0 (300W). Alternatively, the TFX form factor, but they may need some home-made bracket to fit in an ATX-based chassis. Their dimensions allow mounting the device sideways, so the fan blows sideways instead of top/bottom. In that case you’d certainly need to make a suitable bracket yourself.

Your chassis should dictate the form factor of PSU applicable. Then work from that filter onward… Likely would be an yesteryear looking OEM shell, to have pc cables [versus bigg contact finger of slide-in PSUs]

@GoldenAngel1997 yeah, a standard atx psu will fit, but the ‘2u’ labeled psus are all too long. It looks like its designed for atx back when all power supplys had rear exhaust.

Most 2U servers use normal ATX, but instead of your typical “modern” PSU with fan on the side, it uses older style PSUs with an 80mm fan either on the back or on the front (or both for more airflow). And some cases have very ridiculous designs, in which the airflow is reversed on the PSU. You best bet, as Dutch_Master pointed out, is to buy an SFX PSU. That’s just what I did on 2x 2U server cases. Again, careful where you mount the PSU, as airflow is usually intake from the front, then it should be PSU with wires coming towards the front (to get fresh air through the side fan) and the exhaust of the PSU should go towards the back of the case.

One of my bequiet! PSUs (the SFX L POWER 500W - it’s the Power version 1, not 2) came with a metal bracket that adapted SFX to ATX, which would probably work wonders in some 2U cases (if the airflow corresponds with the mounting bracket, unfortunately in my el-cheapo cases, the airflow was inverted and I ended up having 1 fan intake in the front and 1 fan exhaust at the front in a very dust-magnet configuration, literally a vacuum cleaner - and I do have a filter on the intake, but I guess I have too much negative airflow).

@Biky Thanks for the response!
I think I’m going to look into moving my psu from the front to the rear of the chassis. It may take some drilling and tapping but I think there is room back there. I’ll have to do some measuring and figuring but I’ll update y’all and let you know what I get done when I can.

So, last night I did some measuring and figuring and now I’m planning to remove the rear 80mm exhaust fan and use that location for a TFX power supply. It should give me at least 10mm of height to allow the fan to breathe, if I can’t lay it on its side. The Silverstone unit I found is 85mm so I think I should be fine there.
Then I can move that 80mm fan to the front for intake, maybe 2, if I jury rig the mounting holes. More to do tonight after work.

So… I managed to hot glue a 80mm intake fan to the front and then squeeze a TFX psu in the rear just in front of a 80mm exhaust fan. Photographic evidence… 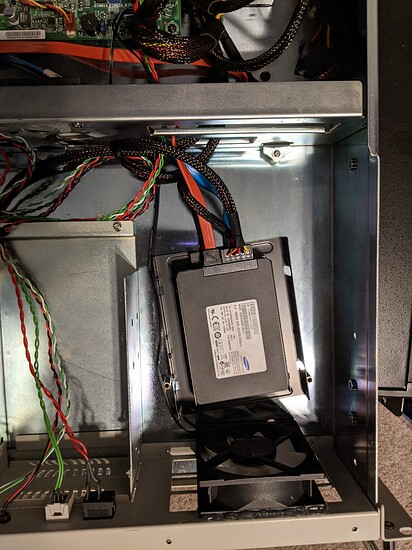 I’m looking for a good, non permanent, way to adhere the psu in place. Any thoughts?

I think I have some lying around, I’ll just have to find it. Great idea @vivante ! Thanks