Hello,
Coming from x299 platform noticed some drops in SATA performance for both read and write for small files.
Using RAID or AHCI doesn’t matter and both perform same. 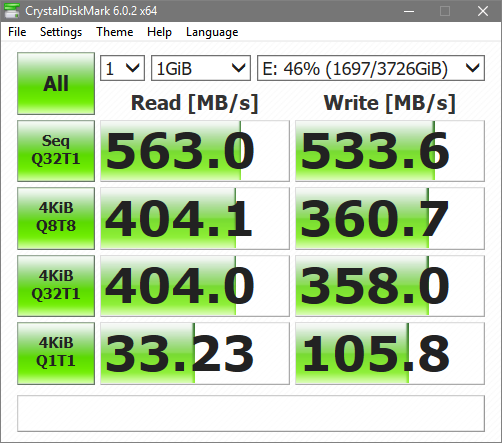 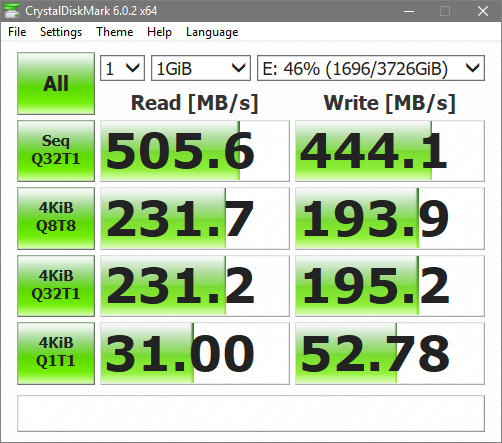 On Zenith all 4 drives are connected to chipset and not via ASMEDIA.

Currently I’m thinking that higher latency on TR platform (70-80 vs 52 on x299) is explanation for those drops on small files.

Any feedback from TR owners more then welcome.

Wow, that’s some horrendous performance. Just for the sake of comparison. 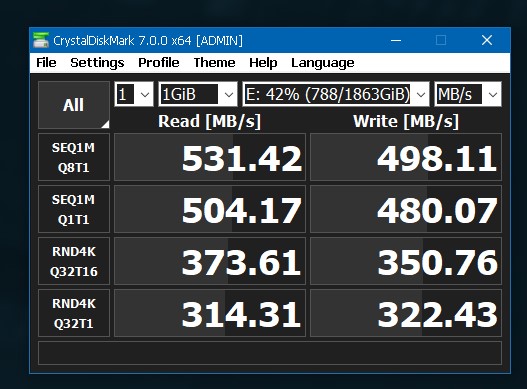 And yes, Intel still has one advantage over AMD.

Below just for the kicks another SATA benchmark. I have remaining 5 drives (4x1TB 850 EVO + 2TB 860 EVO) pooled into one volume with StableBit Drivepool for duplication and live backup. 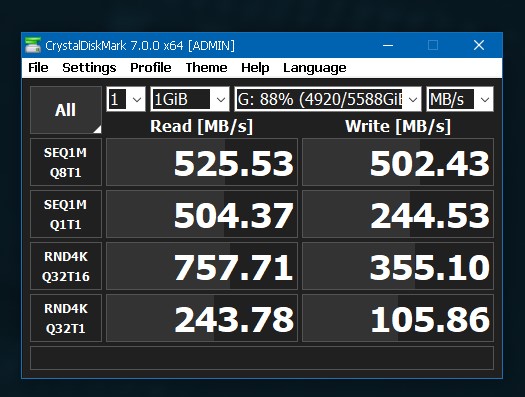 Hi, you didn’t have q1t1 4K random for the 860 evo did you?
Bit hard to compare different tests , and I know it has “intelligent “ caching, but still, would be nice to see 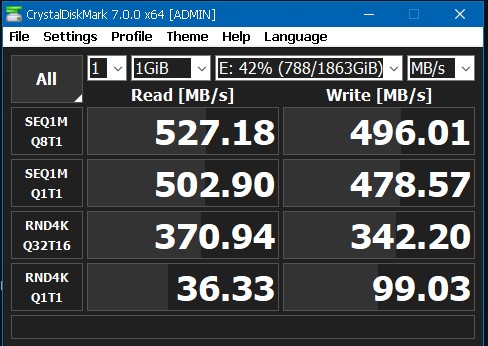 Did rerun, but it changes nothing really. Obviously Asus TRX40s ports are either defective or that is normal behavior for whole TRX40 range.

Bios up to date already?

Maybe cables are not “AMD” specific, will try in free time to swap them.
PSU is Seasonic Prime Titanium 850W so I doubt that’s issue.

Well I did discovered that memory do produce errors, very strange issue, so maybe that’s why this happens. Already ordered replacement so will see what’s what but I doubt that’s issue but who knows.

I don’t know.
To be honest switching to TR platform is a let-down for me. Audio optics doesn’t work correctly, SATA slower, now I do have memory issue (not related, but still frustrating). CPU speed is OK but with the light of 22 core Intel Core i9-10990XE on the horizon I feel like I spend so much money for so little (only plus is no security holes).

Skipping this time Intel as I don’t have access to it now.

In below screens E and D drives are same I just changed letters later.
Controller in RAID mode. 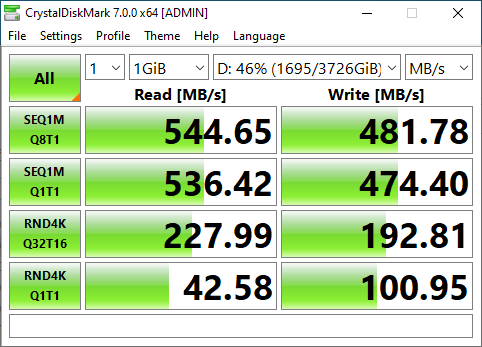 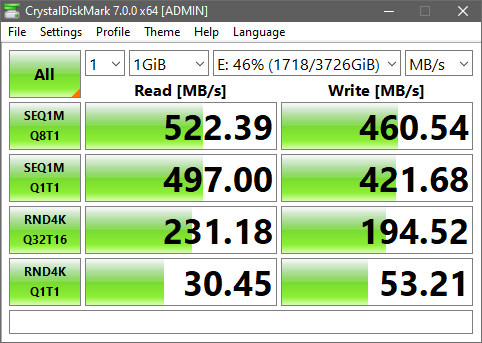 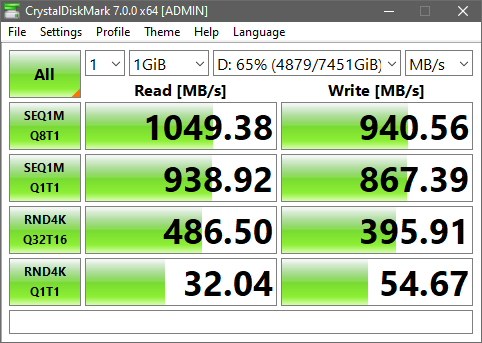 To be honest I don’t know what to think about all of this. Maybe I/O or that’s the “thing” with TR4?
It could be ASUS issue also - on x299 took them 1 year !!! to figure out how to update properly EFI entry before that every time disc was unplugged and system powered on and then replugged back and powered on EFI entry were fuk3d up and I had to reinstall grub all over again so I don’t have high hopes for QA on Asus side - and yes it was fixed by BIOS update, so no OS issue…

Anyhow after new RAM arrival I will test those SSD again with maybe new cables @@.

Well the first thing i would personally do to test,
is running some tests within Linux.
And compare those with the windows10 numbers.
To see if there is a signficant difference in that.
I mean Windows10 has allot of stuff going on in the back ground,
that happely keeps drives busy.

If you see similar performance figures in linux as well.
Then it´s likey either a bios / uefi issues.
Or just a performance issue in general with the AMD platform.
I have not really seen many complaints about sata performance yet for TRX40 or X399.
I do have to note that i was suffering from similar issues on my am3+ setup.
It took me a bit to get it reasonable, couple of bios updates.
But in the end i managed to get some exceptable performance out of it.
But it was obvious that the performance of my particular SSD,
was significantly better back in the day in an intel haswell system.

This is new bench so comparable with above for performance fluctuation. 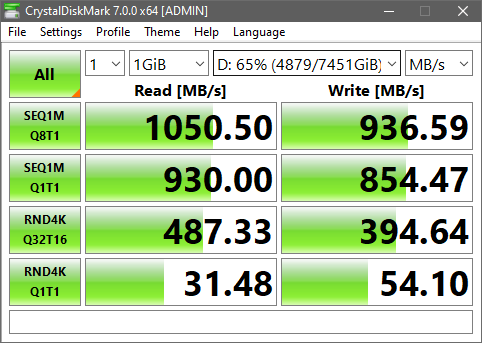 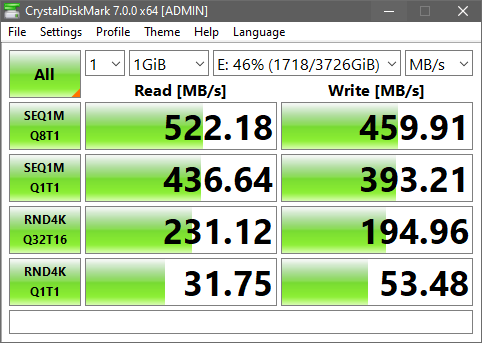 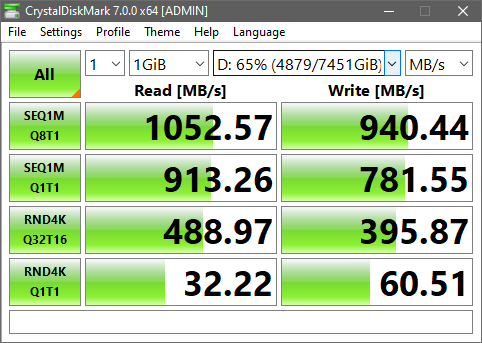 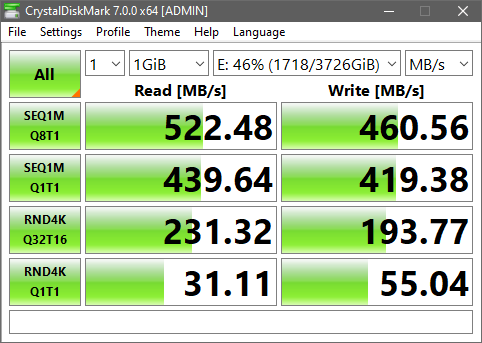 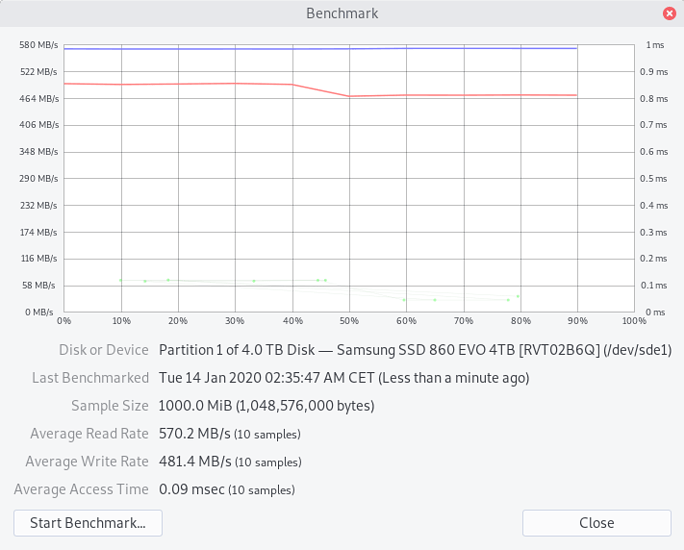 So there is little performance gain with PBO and on Linux it’s better but that test is not really comparable with CDM and I didn’t wanted to search for script that reproduce CDM behaviour on Linuxe.

On these drives there is latest FV as seen in Linux test bench.

@MisteryAngel
As for Windows I know theirs background shenanigans that’s why disabling all this bloatware is my first step after fresh install and then disabling updates so nothing is scr3w3d up again.
When performing tests those D and E drives are not accessible and search service is restrained only for MenuStart entries. Same for Windows indexer. Basically no additional “helpful” services running in background.

Here are the results from a single Samsung 850 EVO on a Gigabyte TRX40 Aorus Master. 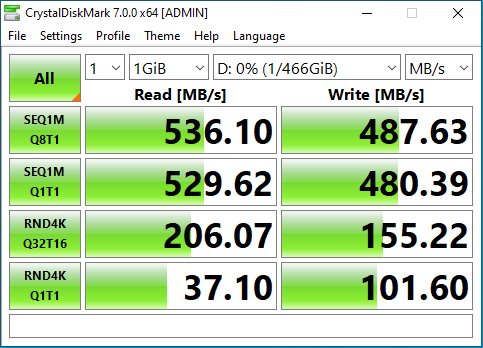 Those numbers look about right to me for a sata ssd.
Only the writes slightly under 500MB/s.
But thats not too bad i guess.

Well in everyday usage I didn’t noticed any “slowdowns” and because that damn I/O is on package so there is quality variation that’s why probably no one from reviewers bothers to test it out as those are practically useless.

But still it is slower then Intel and this part of platform I did overlooked and just discovered after testing this myself (maybe I didn’t looked to deep but major reviewers tested only nvme).

I only have two sata drives and those are mostly legacy so I don’t care about peak performance from them. Three nvme drives are my primary working storage. I would be nice if AMD got the performance of sata equal with intel though.

Eventually I’ll get a 4x nmve card and stuff 4 matching drives in with raid 0, which was half the reason for going with TRX40, 2TB at 8GB+/sec mmmm. To cut off any fears about four raid 0 drives, it will be for working space and will be backed up to a SAN nightly.