So, I've recently embarked on the journey of building my first pc. It is intended to be a NAS which will be exclusively accessed via the network. I put together a list of components which as far as I can tell should all be combinable into a computer, but since I've never actually built a computer before I thought it might be a good idea to get a second pair of eyes. Thanks in advance for your advice!

The only thing that I'm worried about right now is the power supply. The description lists it as "ATX12V/EPS12V". I'm inclined to believe this means it would be compatible with either atx12v or eps12v, but I'm not 100% clear on that. Will it just have plugs that don't go anywhere?

Anyways, thanks again for taking a look and pointing out any glaringly obvious mistakes or omissions I've made!

Remove the 212 evo, for the cost of that cooler you can upgrade the cpu to a pentium.

What kind of NAS?

If you care about your data integrity you'll need to get some EEC RAM going and maybe a hardware RAID controller.

And you don't need a boot drive, you just need a USB to run the OS off of since it all sits in the RAM after booting(someone will correct me I'm sure)

If you wanted more ideas for builds this is what I was looking at a while back, it's fairly expandable and compact. though the case can be purchased outside of newegg for much less, and you're going to want a UPS in case the power goes out.

The flash drive is overpriced, but it's too cute not to get. 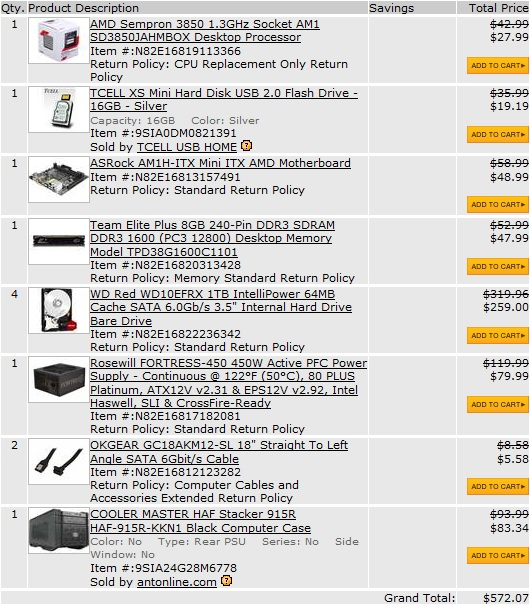 Thanks for the quick reply! After reading your suggestions, I intend to remove the Cooler Master, upgrade to pentium, and find a lower-power psu. I'm not sure I really want to be running my OS off a usb disk, having a drive for it give me a few advantages. First is peace of mind: I don't worry about losing the flash drive or something and then having to reboot. Also, I don't intend to simply run the os out of the box and never change it - I'm a tinkerer when it comes to software, and often a live usb doesn't offer the space or flexibility I require.

Additionally, I believe the RAM I linked to is EEC, am I wrong in that regard? Thanks again!

The RAM is ECC, but I believe only certain processors/motherboards can actually make use of it.

What OS were you planning on using? FreeNAS seems to be the most suggested one.

I'm not sure the mobo can take ECC RAM, also the RAM you linked might be a little too sketchy. Not sure what to think of it...

For something like this though ECC would be over kill. I'd spend the extra money on a spare HDD or even more RAM. ECC is useful for processing rigs with extremely high volume or a NAS with a lot of data running through it, not something with a measly 2TB drive in it.

celeron, pentium, i3 and xeons support ecc but I don't know what chipsets support it though.

I would spend that money else where.

You could probably spend a lot less and grab an ex-business machine - i3 etc then add a nice new hdd. Even an old 775 quad would do.
Dont need that cooler.
That ssd as well... yeah, makes sure you keep the receipt for rma.

But what exactly will you be using the NAS for?

Does your data integrity matter?

So then, how much do you care about your data.

You could probably spend a lot less and grab an ex-business machine - i3 etc then add a nice new hdd. Even an old 775 quad would do.

Here is what I did for a while, I took an old Dell Core2Duo thing, and stuck a larger HDD in it. I eventually got annoyed with it taking up space and being nearly un-upgradeable, so I just chucked what I didn't want.