It may not support 1080 resolution at a refresh rate that your card puts out.

I don’t think there’s going to be much you can do to fix it outside of maybe clamping down the refresh rate on your card down to 30hz, if possible, and even then…

edit:
according to a quick google, the spec here: 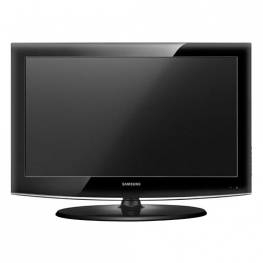 Older TVs don’t support proper chroma and sometimes you also have to deal with non standard pixel layout (not RGB). Just don’t use that thing for monitor purposes, it’s not made for that.

My current monitor was giving me some issues, so I connected this TV temporarily.

I noticed the TV also has a game mode, I turned it on, can’t seem to notice any difference though, brightness and contrast lowered a bit nothing else seems changed.

Text doesn’t care about progressive or interlaced. Here is what makes text look bad on TVs:

Chroma subsampling is the practice of encoding images by implementing less resolution for chroma information than for luma information, taking advantage of the human visual system's lower acuity for color differences than for luminance. It is used in many video encoding schemes – both analog and digital – and also in JPEG encoding. Digital signals are often compressed to reduce file size and save transmission time. Since the human visual system is much more sensitive to variations in brightne... 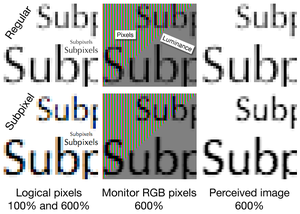 Subpixel rendering is a way to increase the apparent resolution of a computer's liquid crystal display (LCD) or organic light-emitting diode (OLED) display by rendering pixels to take into account the screen type's physical properties. It takes advantage of the fact that each pixel on a color LCD is actually composed of individual red, green, and blue or other color subpixels to anti-alias text with greater detail or to increase the resolution of all image types on layouts which are specifically ...

So, there is no setting that I could change to fix text rendering issue?

I don’t know your specific model of TV but … I doubt it.

Well, I can’t find good information on it which makes me think it is not just an older set but also a low tier one. So …

But at least now you know what to look for.

Because it is what it is.

I have had this problem before, it is just a TV issue. Typically it has been older “HD Ready” TVs which itself implys 720p maximum.

The long and short of it is TVs are not monitors and resolution and refresh rates seem to be a wild west between the TV and set top box which the end user simply does not care about as log as it “just works”. PCs and their users especially those who game tend to be a lot more specific about what is expected and should be, but the TVs just don’t care, that is why there are monitors that are made for the task. I don’t know why that is but that is how it is in my findings.

1080i is HALF the refresh rate essentially.

Every other scan-line gets updated each cycle, so at “60hz” you get the odd lines updated one cycle and the even ones updated the other cycle for an effective “full refresh” of 30hz. Which is why 30hz works. 1080i @ “60” and 1080p @ 30 are basically the same. Except with interlaced modes you may get “fringing” effects but motion may look smoother because your eyes are slightly fooled by it.

It’s a bandwidth thing - the TV maybe doesn’t have enough display bandwidth to do 1080p. Because its old.

Hmm, thank you for explaining.

Well I got a new monitor today so I guess this issue is resolved.