They constantly throw errors in the IPMI interface and the system is unstableerror.txt (6.4 KB)

Here’s a “shoot from the hip” thing to try, manually set those slots as pcie 3 (instead of 4) in bios and see if that calms it down.

The boot option pci=noaer can quiet the errors, but doesn’t actually resolve whatever is going on, and also hides non-correctable errors (which for a data disk could mean data corruption). It’s possible the kernel is halting because an uncorrectable error eventually comes up.

pci=nommconf is also something people use, but I don’t know offhand what that does.

Another thing that commonly generates these sorts of errors are AMD GPU’s with the reset bug, like my old RX 460. Also not sure what’s the deal with that, though turning off ASPM in bios and boot (pcie_aspm=off) options seems to be the trick to fixing the hard GPU crashes I was getting that needed a reboot to fix. It may help you as well, what this does is disable the automatic PCIe downclocking for energy saving stuff.

Obviously don’t turn off error reporting when trying other things, so you can tell if it worked or not.

what log said also dont use the onboard m.2 slots those are pci3 only. have to use a pcie add in card to make those run at pcie4 speeds

There’s actually a MOA revision of the S8030 series boards which supposedly supports PCIe 4 to those slots.

The OOY version does not officially support PCIe 4 to those slots, only 3. I seen reports that some people have gotten it to work fine, but it’s going to be really hit or miss if it can. And they may or may not have been checking their logs. They may also not have been aware of the board revisions.

I don’t know what those acrynymns stand for, but I believe the OOY version is the original version (which I have), and the MOA is the newest revision.

The only other differences I know of are the MOA version has 5 4-pin headers, and the OOY version has 4.

Any recommendation for a PCIe add-in card with a support for 4 NVMEs Gen 4? that doesn’t break the (very broken already) bank?

I tried my Gen3 NVME on the board and it had no errors so it seems to point to a Gen3/Gen4 issue.

The Asus one should be around $30 pandemic not withstanding. eBay might be a good source

ASUS It’s out of stock everywhere and about £150 on Ebay I’m going to take my chances with this, which more ore less looks like the same thing 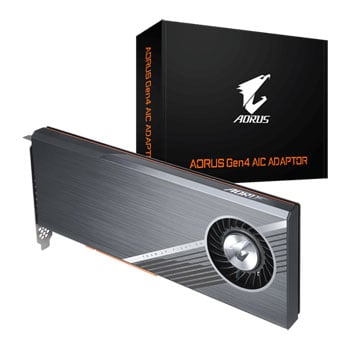