So we have seen so many instances of where memory aids the fabric of the ryzen chipset.

So here is the real question

To further develop this as you all should know from my long standing on this forum you will know I dont really favor asus as much as I used to in fact I dont like there QC at all. I favor asrock and I love the look of the taichi. Is there really any plausible long term loss I could see going with the taichi over the rog? Mainly in the area of performance stability and Overclocking. The ROG may have the branding to back up the OC claim but the power delivery on both boards seem to be more than enough

Samsung B-Die chips on Single Rank sticks is what you want.

Well, my tinfoil theory is because Samsung is one of the makers of the ryzen CPUs

But in all seriousness, no idea why... It's just what turned out the best so far. It'll probably all get sorted in due time and you'll be able to use whatever, but until then... yeah. Problem is RAM manufacturers rarely state what rank the chips are on, and who made them... There are a few who slapped the "optimized for ryzen" on the package and called it a day, so maybe look for those.

I also started a discussion a few days ago regarding clocks, amount of sticks and what size, etc over here:

Even since before the Zen Launch I've been thinking about getting a new PC, but waited for what Ryzen had to offer. Since the launch I've been pondering about several parts to take, but I'm stuck at RAM. I know the Ryzen memory controller is a little picky, and officially it says this: Modules Rank Clock 1 / 2 Single 2666 1 / 2 Dual 2400 3 / 4 Single 2133 3 / 4 Dual 1866 Bear in mind I'm currently watching out for supported clocks only, since I'm not exactly experienced in Overclocking and Memory OC is kinda dodgy on Ryzen anyway (if it works fine, if not I still want the maximum supported). So far so good. But I remember wendell saying in one of the review videos that it could be potentially better to get Dual Ranked memory in 4 slots since you'd be able to clock it higher then Single in 2 slots? Unfortunately I can't remember which video it was (and I can't look it up since YT and proxies are blocked at work). Maybe I misunderstood this somewhere, but nonetheless I'm not sure about the RAM overall. It's also somewhat hard to pick when 2/3 of memories don't even state if it's single or dual ranked... So I'm a little confused overall. Currently I'm looking at this Corsair Kit (single rank with 2666 XMP profile) and this Crucial Kit (dual rank with 2400) (trying to go for a Black/White kind of scheme). Also good lord is RAM expensive these days. I'm not 100% yet, but this will probably all go on a GB AX370 Gaming 5 with a 1700, this is more about the memory in general though. Any help appreciated :stuck_out_tongue:

Thank you for that piece of information. Good talk..

Uhm @wendell I know youve had some interest in Ryzens fabric. Did you find any substance in the claims that more memory past 16gb on these chips makes the senseMI fabric faster?

this seemed to be a kind of interleave latency stacking where the rows, columns, rank and chipselect can all be staggered to get performance boosts without having to have quad channels..but the timing has to be absolutely perfect to work it out

Ive found that out scouring sub reddits. It seems that Gskill flare x being AMD compatible yields the most flexibility when it comes to achieving this. Its been a long time for me building since ive encountered a platform that is so memory reliant. It actually kind of makes me happy. I get to tweak and mess around with it.. all in the name of SCIENCE!

I hope that on AMD's next big performance jump or architecture they hop on board quad channel though. I know dual channel optimizations were there to keep the IMC cheaper and to bring the chipset cost down while focusing and pooring more resources and die space into what really mattered

Think you miss understood. Dual rank is the memory, not populating all 4 slots. In theory 4*8gb should yield better frequencies but it's more dependent on the motherboard and silicon lottery at this point. The crosshair seems like one of the best for memory at the moment due to the time invested by rog but not everyone will get high frequencies. For example I can manage 3600 on the 2993 multiplier with 4*16gb but others with the same memory Max out at 2993 or even 2600.

Really luck of the draw here. Latency is more to do with lucking out with good b-die memory

I hope that on AMD's next big performance jump or architecture they hop on board quad channel though. 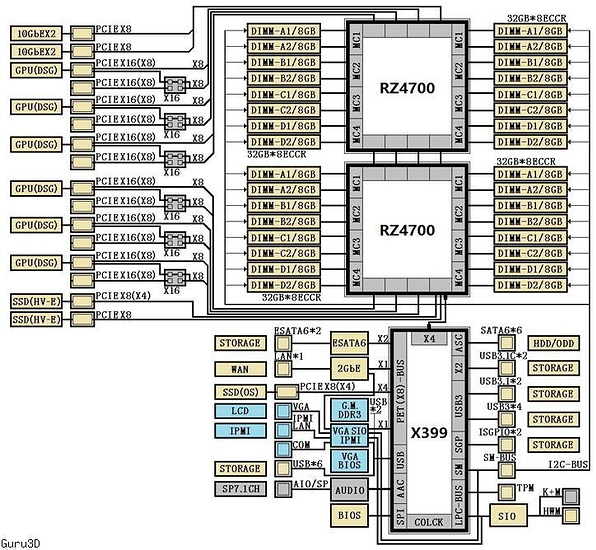 leaks are glorious arent they

In theory 4*8gb should yield better frequencies but it's more dependent on the motherboard and silicon lottery at this point.

Well i dont really think so.
With 2x16GB you will have a bigger chance of reaching higher clockspeeds then with 4x8GB.
populating just 2 slots will cause less stress on the imc.

Except dual rank has a higher effect on frequency than populating all 4 dims. Try populating a Ruben system with 4x single rank hynix memory then try 2x dual rank hynix. The dual rank is highly unlikely to post and won't reach as high frequencies. Forget what you know. This is how ryzen currently works.

Issues with memory are a timing and compatibility issue. Not a stress issue on the SoC

Wait im so confused at your statement. You do realize there are single rank 16GB sticks right? LOL not that i really want that much im just saying. Dual rank obviously wont reach a higher frequency it requires greater drive strength I understand this. Mistery is actually right here ive seen 2x16gb gskill reach higher than 8x4 gskill of the equivalent type both were single rank. I was trolling reddit when I encounted alot of peoples hard numbers on it.

It gets a bit deeper have you looked in some motherboards where you can change drive strength? something about that tells me there might be a way to make the controller drive stronger to push lower timing but i could be super wrong IDK ive never tweaked with that.

Yes a setting exists that I have no messed with LOL

Don't get me wrong. Dual rank is very much possible. I'm running 4*16. But the thing with Ryzen is knowing what type of memory to run. Basically buy any b-die sticks and you should be fine. If you have or buying cheap, 4* single rank is better due to the nature of how the AM4 platform posts. Trim has huge issues with any memory that isn't b-die. When it comes down to it. Ryzen has greater issues with dual rank than 4* single rank. It's just the nature of the platform.

However if you have Samsung b-die and a decent motherboard, you can ignore these issues. Worst case you will Max out at 3000MHz.

But the fact is if this was a stress issue on the SOC, we would be posting but having crashing issues. The problem however is Ryzen comes with a very narrow memory training window and most memory fall too far out of that window for low latency high frequency settings.

Thats why you should get a pair of G.skill trident Z´s or Flare X.

I was about to say this too. Theres amd optimized sticks out there. theres even an AMD optimized one running at 3466 which assuming it never makes it there it could make it to 3200 on a taichi.. which I am getting

but good copy I get what your saying @Rudster

I'm running 3600. Trident z. The difference with the and optimised sticks are essentialy an xmp profile that should work. You still have to change the bclk though to push past 3200 and to get good sub timing, you should be bclk overclock with a 2666 or 2993 multiplier anyway

I think 3200 is more than enough to push the fabric to where I want it. I like to stay within the realm of the recommended overclocking ranges