Decided to make this post because I remember @wendell mentioning that he was having difficulty getting ECC memory to hit 3200 with decent timings on Ryzen.

I just surprised myself by getting ECC udimms overclocked on an A320 motherboard, rather than the usual X399 and X370 motherboards I’ve managed it on previously. First time I’ve tried on A320, but still this is supposed to be a bottom bin motherboard.

Anyway, I just assembled a SFF Ryzen Linux desktop for a friend of mine. I have been able to successfully overclock a 16GB kit of DDR4 ECC ram to 16-18-18-32 3200mhz and have it pass every stress test. Google StressAppTest, memtest86, and stress. ECC functionality was confirmed by setting wacky timings on the memory, running a stress test, and checking the system logs for the hundreds of corrected errors.

The build is meant to be a modest cost, headache free linux desktop. It’s specs are modest and are as follows: 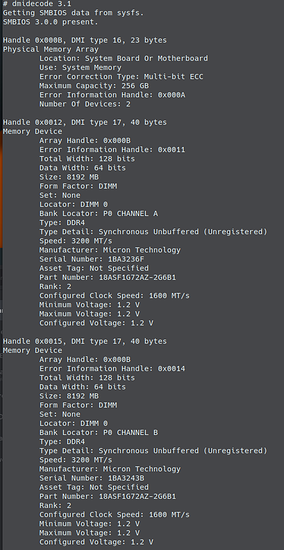 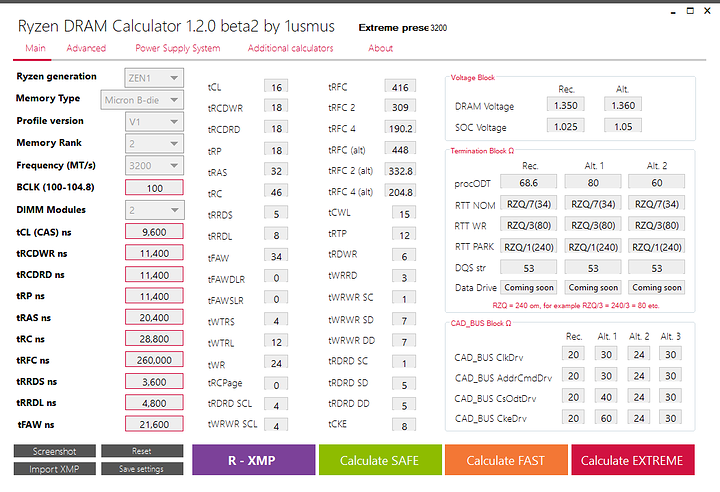 Got a video coming-out on this soon. Bump your voltage for more stability. Cmd rate 1 or 2? Timings look good.

CMD rate 1 and the voltage is actually at 1.35v. The OS is polling memory volt info incorrectly.

1.35v seems fine and is rock stable. I polled the temp sensors embedded in the Crucial DIMMS and it doesn’t seem to have increased operating temps.

Been fooling around with these DIMMs, some different brands of motherboards, and bios revisions. Seems AGESA revisions after PinnaclePI 1.0.0.1a and I have to increase and loosen the main timings. End up with something more like 18-20-20-38. But this is the crazy part, a lot of the nitty gritty sub timings can be damn near halved in their values. At the end of the day, it comes out to approx the same performance, due to all the sub timing improvements.

Motherboards with 4 dimm slots are still a bit of a headache and require a bit extra tweaking. I imagine this is due to the increased length of the PCB traces. In addition to this I haven’t really bothered with AGESA revisions pre PinnaclePI 1.0.0.1. Mainly because pre PinnaclePI RAM compatibility, even for XMP kits, was sketchy at best.

Also after messing with an ASUS Prime B350-E… I am starting to wonder if Asrocks advertising about the benefits of using “2oz of copper” (for their total PCB traces?), instead of the industry standard 1oz, actually has some merits.

Fun bit of info I learned is that enabling the AMD Data Poisoning Feature, is the reason System Halts on uncorrectable errors don’t happen. If enabled and with kernel support, the OS will instead just kill whichever process/application experienced the uncorrectable error.

Yes, 2933 and 3000 mhz has been consitantly easy. Most ECC unbuffered DIMMs can do it, depending on the quality of the motherboard traces. Even with sloppy timings the system responsiveness is a pretty significant improvement over 2666mhz. For some reason it seems like Zen really likes memory running at ~3000mhz (regardless of timings), with anything lower being sluggish and anything higher being negligible.

I’ve just been obsessed with buying various ECC unbuffered DIMMs, clocking them to 3200mhz, then getting off on fine tuning the timings as low of possible. It’s kinda becoming a hobby for me.

I have seen in a few places that the so called “thicker” copper layers ASRock claim to use help with memory overclocking a bit so my plan to go with the x399 fatality is looking like the best option ( just need to look into how there PBO works, i have 2 of them in work but no 2000 series TR for them ofc)

Someone needs to make some 3000/3200mhtz ECC , with TR being the clear choice for workstations and HEDT at the moment whoever made them would make a killing!!!

I mean i could just buy your standard gamer RGB Samsung b-die and clock it to 3200 with thigh timings and be done with it , but i think a slight performance loss form that 200mhtz and slightly slower IF is worth it for the security of ECC.

Honestly i wish we could just have ALL memory be ECC and not have to worry!

You haven’t watched this yet, did you?:

That is why i looked into the possibility of getting ECC working at 3000mhtz on TR.

The argument given is that there is not a need for it, but how the hell would the manufactures know if they dont make it ? Marketing as usual is a waste of space ! All they know how to do is sell stuff they already make to people who already want it! There is no perfect pasta sauce , when will people learn !

First off. On the Asrock PCB. It’s probably more than a marketing ghimick. If their traces really are twice as thick, that would result in half the electrical resistance. In theory this would help with getting stable memory performance when using more than 2 memory dimm slots or dual ranked dimms. From memory tweaking, I find it seems to result in less fiddling required with the ohm (resistance) settings and supports lower voltages.

Second. I have to agree that it’s crazy that memory manufactures are allowing Intel and their strick adherence to locking ECC mode on unbuffered memory to JEDEC, to dictate the market. I really wish one of these memory manufactures (Micron probably) will release some ECC unbuffered DIMMs where they have preflashed the DIMMs SPD rom with a special AMD exclusive “A-XMP-ECC” memory profile. This wouldn’t even require them to manufacture new designs or products, but just preconfiguring the SPD on certain ECC unbuffered SKUs with a high performance memory profile. A profile that has been QVL’d and tuned for AMD Zen platforms.

So many people scoff and even get toxic when you broach the topic of high clockspeed, lower timing, ECC unbuffered profiles… But honestly from my own personal experience ECC mode enabled on a Linux workstation or even an office productivity desktop, results in drastically increasing system and application stability. I personally consider even a single application error/crash per day, to be one too many and agrivating. Not having to make the compromise between system responsiveness and stability has been a godsend… But it would be nice if memory manufactures would create some A-XMP-ECC SPD profiles… If only to make the initial system configuration process less of a potential headache, for people who don’t get off on fine tuning.

(standing on a crowded commuter train, typing with my thumbs, so plz excuse any typos)