I have been contemplating with some trepidation a new workstation to refresh my old 2017 era 1800x workstations.

It is almost the worst time to do this, but my daily driver AMD 1800x is getting flaky - USB dropouts, video issues with my AMD Radeon HD 7970/R9 280X. Not sure if it is the AsRock x370 Professional Gaming, the GPU, a RAM stick, or some BIOS issue, but I am losing confidence in this box. Plus I really need to learn more VM technologies. I have some spare cashflow at this time, so it is time to do this.

I like lower power consumption and heat if possible.

Noise it not a big issue.

I want the 64GB RAM for VM goodness.

I would love to do an Emperor-level rackmount EPYC supercomputer, but can’t handle that now. Love the videos from LevelOne and Gamers Nexus but I will live vicariously for those super machines. My speed is the x299 to z570 upgrade video that Wendell recently did for Dewey.

I just ordered these components from NewEgg

I am currently thinking of:
the Asus Crosshair VIII Dark Hero motherboard (want the 8 SATA, 2 M2s and 2NICs and to get a break from AsRock)
the MSI 6700xt Gaming X (want the 12GB RAM and as much power per dollar as I can stomach)
the new Fractal Meshify 2, Meshify 2 XL or Torrent (because I had a bad experience building in the tiny original Meshify C)

please give your thoughts on the MB, Video, case

I have just discovered this new board

The Best Motherboard for Creators.

I can definitely recommend that as a good combination. The Meshify 2 is very nice to build in 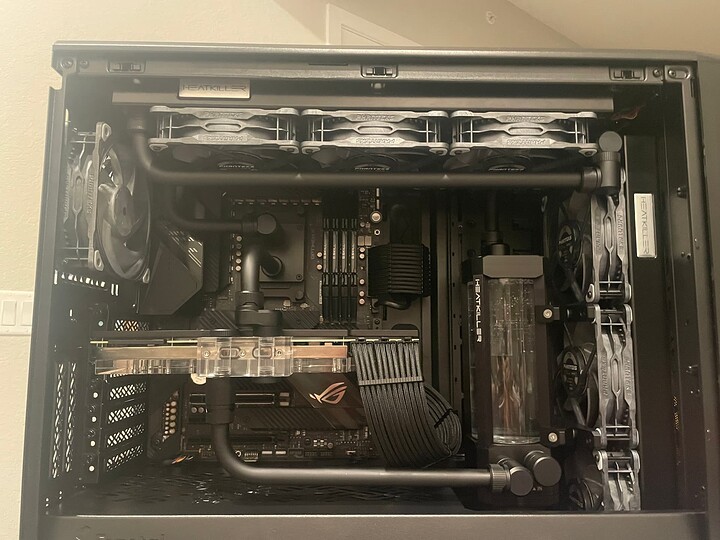 One of the things I like about the MB is that the location of the m.2 drives and their covers makes it easy to swap them out without having to tear apart anything else

I will say that if your doing only air cooling, you might look at the Meshify 2 Compact; has exactly enough space for that.

The Meshify 2 feels a bit big without the rads and fans.

Thanks - I am an aircooling guy but I also like lots of room.

Have you seen this : ASUS PROART X570-CREATOR WIFI AM4 ATX AMD Motherboard - Newegg.com

it has thunderbolt and 10Gb

I cant use parts picker because at least two of my items are not in their database! I guess I will leave them out so we have a good list.

I have and while the newer boards are nice, I really don’t see use for them in 99% of normal home builds. 10Gig NIC is really niche at the moment for personal use.

The TB / USB4 is compelling, but I’d wait to see how that pans out long term and even then, if that was a compelling feature, I’d probably go Intel as it’s more mature and better integrated on that platform.

Lol aesthetics also play a minor role, in my opinion, so I might be biased from the get go

here is the partspicker link

I might increase the budget by a couple hundred and move to seasonic 1000w titanium for about 300 (this will outlive the rest of your components in your upgrade lifecycle so best to always get the best you can afford) and the ssd to 2Tb (since you only have two slots, best to max that out from the the get go)

On the MB, hopefully some others can chime in. I’m fairly biased on certain things when it comes to AMD vs Intel platforms and TB is definitely one of them; I’m just hesitant to want to play ginea pig for features I’m not sure will be rock solid

I will say that the Wifi 6E is nice, but that hardly matters if you’re using Ethernet.

The more expensive titanium rated PS is a good idea in my mind for what I have for the next 3 years. I just picked what I already had initially.

Also for the PROArt MB there are 3xm.2 slots and 6 Sata. I will likely go with 2TB and maybe 1TB for boot.

The thunderbolt is for storage and/or video

"Star of the show are the dual Thunderbolt 4 Type-C ports powered by the Intel JHL8540 chipset. Each port delivers up to 40Gbps bidirectional bandwidth which is actually useful for creative professionals and prosumers with data-heavy projects. Realistically, there’s no faster or better way than Thunderbolt to transfer large projects to massive external storage devices such as a multi-TB DAS. Just ask Apple users!

Of course, you can also support up to dual 4K displays from the Thunderbolt/Type-C connector (aided by the DP-in for TB4 to re-route video from a dedicated graphics card). That means you can connect to Type-C monitors such as the ASUS ProArt 4K HDR model (shown in our video review) with a straightforward single Type-C cable.

The ports also support up to 15W 5V/3A charging. I can wax lyrical about the benefits of TB4 – this is an excellent inclusion on a relevant spec motherboard."

Well, RAM optimization realise on a bunch of factors, but I’m 95% sure that the 4x16 I have is about as good as it gets for Zen 3:

I picked it after going through a bunch of research of ram ranks, ram ocing, etc…

2 > 4 is mainly due to being able to OC 2 sticks better than 4, but you can certainly throw money at that problem lol

Yeah, I certainly agree Thunderbolt in general is awesome and TB4 is a very compelling thing, it’s just that I would err on the side of caution and go Intel (Alder Lake coming in a bit and it will likely beat the 5950x in performance in all dept), if you held a gun to my head

No personal experience there, i just recall reading about some issues online in Reddit and other pc forums

I’d consider giving a look at the ASRock Rack X570D4U boards (that is, if you’re limited to or prefer mATX; I haven’t considered any ATX boards). That’s what I decided on for my 5950x-based workstation and I don’t really regret it. The main downside, compared to consumer boards, is the dearth of I/O, but I already had a USB KVM and separate USB PCI controller before switching to this board anyway so it hasn’t really been an issue for me. (Plus the 5950x isn’t an APU so you’d need a separate GPU anyway, but I do use the VGA port (which is driven by the BMC/IPMI device) now for my Proxmox hypervisor setup.)

thanks lae - I looked at that one. I really like the BMC for ipmi capability of this type of board but think I will look at a server next year. I am looking for a powerful workstation now. I want multiple Sata, M.2, 10Gb ethernet and Thunderbolt, if I can find a reliable board with all of that. So far I like the Asus Proart Creator, the MSI Prestige Creation (which does not seem to be available at a reasonable price), and the Asus Crosshair VIII Dark Hero boards.

Gotcha. Although I’m curious, do you mean more physical PCI-E ports? I’ve realised that the 5950x is relatively limited in lanes in the first place for beefy workstation use (20 for Ryzen vs 64 for Threadripper (128 for Pro)) so that seems like the main constraint for using Ryzen in a workstation.

That said much of what you listed in your first post is actually pretty similar to how I’ve been using my board—64G of RAM (and I still have 2 slots available for an extra 64 if I ever wanted to), 2 NVMe M.2 drives and 6 SATA SSDs (although I cut down on this temporarily in my new case with fewer mounts)+2 SATA HDDs. I’m also using 2 GPUs as well, mainly because I use a dedicated one for gaming in a Windows VM. Despite it being labeled as a server board it’s actually been very useful to me for my workstation (sitting next to me since it’s pretty small, lol).

Edit: just saw your edit—I guess the main thing lacking in the one I suggested is indeed Thunderbolt. Anyway, if the price is around 300-400+ then that’s probably going to be the standard running price for a board like that to be honest (10Gb is expensive), so might as well invest in it for the long term. I paid around 450, I think, for my board? Which was like 3x what I paid for previous motherboards I’ve owned… Yeah…

Hard to believe I had more lanes with the intel x299 - of course it is apples and oranges, PCI 4 vs 3 and infinity fabric for AMD vs the intel PCH architecture.

EDIT: Actually the Ryzen desktops will have * 24 * PCI Lanes - 20 used as above plus 4 lanes connecting to the x570 chipset.

Just throwing it out there, but if you need more lanes and need to switch to HEDT, Intel is cheaper nowadays.

Not as good, but definitely cheaper

This is what I built, but I should warn you, it was not cheap. But it ticks all the boxes you listed and may give you some ideas for your own build.

I was considering building in a tower case, but decided to go with CoolerMaster HAF XB EVO case instead. I am very happy I did, this case is laid out very well and offers a lot of space for drives, but is still compact and easy to work on or move around. The top and side panels are easily removable, the motherboard tray is also removable, and this can even double as an open-air test bench style setup after removing the panels.

It is entirely air-cooled, and can support a staggering number of fans for cooling the various components.

It has 4, 5&1/4" bays accessible from the front, and another 2 internal 3&1/2" bays internal. Much of the case is tool-less using thumbscrews for the panels and latch style catches for the drive bays. The two bays on the right-front are hot-swap bays for HDD’s.

When fully packed with hardware it gets quite heavy and turns into quite a brick of a computer. However the case has built-in handles, supported by the frame they are very well placed and incredibly sturdy. Since the motherboard lays flat - there is never a worry about undue stress from heavy cards hanging off the PCIe slots.

I am quite happy with my current build. It took a long time and a lot of money to get it all together and it all works very well. Definitely the fastest and most carefully tuned PC i’ve had the pleasure of using over the last 40 years. This build taught me a very important lesson - while having the best parts is fun, it is rarely really needed f…

I want the 64GB RAM for VM goodness.

This may become a major headache for you, make extra double triple sure the RAM you select is compatible with your 5950x and motherboard.

Wow I have that case! In fact I have 2 - got one as a gift. I am definitely going to use it as a test bench case at least. Was thinking about this last night! I like Fractal also. I have a Cosmo case from about 20 years ago.