Well here is what I have been waiting for… it is a shame there isn’t a gtx 1070 in it, but its pretty sweet looking, and less then I thought it would be in Canada.
forums wont let me link … oh well 1999.00 in Canada.

What is it called? Can you share the name please? Would be much appreciated as I would like to buy it.

I got you bro; Asus ROG Strix GL702ZC

You got it. they are also making some with an r5 in them too.

This laptop would be an upgrade to my desktop in pretty much every way.

If it had a gtx 1070 it would pretty much be my desktop…give or take a couple M.2 and SSD…

Just a heads up for anyone thinking about buying this and using it on the go. The battery life is miserable.

Even just under light web browsing it is less than 2 hours.

but it comes with a power supply so … all is good.

I mean it still is something to factor in. Battery life is important and considering the power adapter is massive it may not be something one wants to carry around all the time.

This is def more of a desktop replacement level system then anything portable. Just pointing that out

precisely why i put “Laptop” in quotes… not really a lap top as a mobile desktop lol I think it would be great for unreal editor 4 though… although I am unsure about that graphics card…That is what would prevent me from buying this… no Nvidia graphics.

Even a 1060 would have been a better choice IMO. Though AMD chips are good for certain workstation tasks so it is a toss up

I like the idea of not having a desktop anymore- as long as there is an outlet, my work horse / home lab machine can go with me. If it needs to be off the juice for a little while, it can. Need to dock it and use a wall of screens- it can. AMD seems to be dropping the ball on GPUs but oh well- I’m not much of a GPU power user anyhow.

I like how it even uses a desktop chipset. Since I dislike gaming laptops (for gaming at least) I could maybe tell myself that it’s not a laptop in so many ways.

That Freesync and 120 Hz IPS panel is something I’d like to have on whichever type of laptop I might ever buy next. At least Freesync and a refresh rate somewhere north of 60 anyhow.

I don’t think that’s the concept of those things

They are not meant for “on the go”, more as a mobile desktop replacement. Much like the top end XMG/Schenker notebooks

But you’re right, something to factor in either way.

I was expecting a Raven Ridge build.

Oh hell! This really is madness! 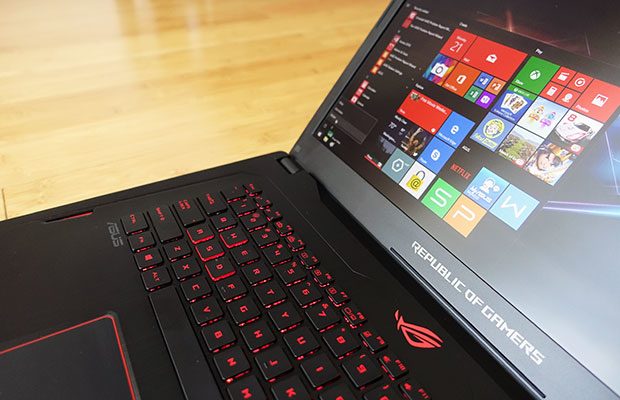 Asus ROG Strix GL702ZC review and impressions - what to expect from an AMD Ryzen...

I am happy to live in a universe where this exsists but would never buy it.

Gaming laptops are waste of money regardless of what graphics brand they have. I learned that the hard way.

@catsay I’m pleasantly surprised to see a laptop with replaceable CPU, thought those were extinct. However I don’t agree with the Bad points the reviewer wrote down.

RX 580 can play games fine at 2560 x 1440p. This Asus here has resolution of 1920 x 1080p. So in fact it has more than enough power for the given resolution. Secondly, if this asus had GTX 1070 or 1080 then it would produce even more heat and increase the risk of the laptop overheating. In addition the free-sync panel would have to be replaced with g-sync screen which would make the whole thing lot more expensive.

Lastly, for those people that would want to use Linux, the RX 580 is much better choice as you can use open-source drivers and don’t have fix your system after every single update.

not a big fan of the light bars on the hood

Dude make your fucking mind up.

Battery Life - Remember that this laptop has no low power iGPU.