So is it just me, or does Ryzen 3rd gen just run quite a bit warmer than the last 2 gens?

I’m wondering if it’s because of the chiplet design and the way most modern coolers are designed to transfer heat from the center of the CPU instead of the entire IHS.

I’m currently using a Deep Cool Captain EX White 240mm water cooler. When I’m downloading Diablo 3 at 40MBps, the CPU gets to 52C and sometimes all the way to 60C. Ambient is 82F

Doublecheck if your BIOS is updated to the latest non-beta version. May reduce voltage draw from stock. Ryzen 3rd gen will also boost if it sees that it has the thermal overhead, which I believe the lower it is, the more aggressive it is about it, which may contribute to it

Oh I can absolutely assure you I have the latest BIOS, been watching every new release like a hawk (non-beta), the chipset drivers too. But I have the voltages manually set to 1.32 for my all core overclock of 4.2Ghz. But even without the overclock, the CPU would still run as warm.

CPU gets to 52C and sometimes all the way to 60C

That is indeed a bit warm.

Can you check with HWinfo that you are there is no offset between Tdie (actuall CPU temperature) and Tctl (Controll temp used for fan control)?

Looks to be the same in my case.

As some modern cases are rather restrictive to airflow, what case are you using and can the radiator breath freely?

I’m using the NZXT S340 Elite, with the side panel off. I usually leave it off for the summer. I’m pretty sure airflow is not the issue. I have my GPU also water cooled and it barely hits 60C during load, and that’s with a 100+ Mhz overclock.

But it seems I’m not the only one with the chiplet theory.

And this guy is using a custom water setup too.

A quick search brought up this video
And this graph struck me as odd: 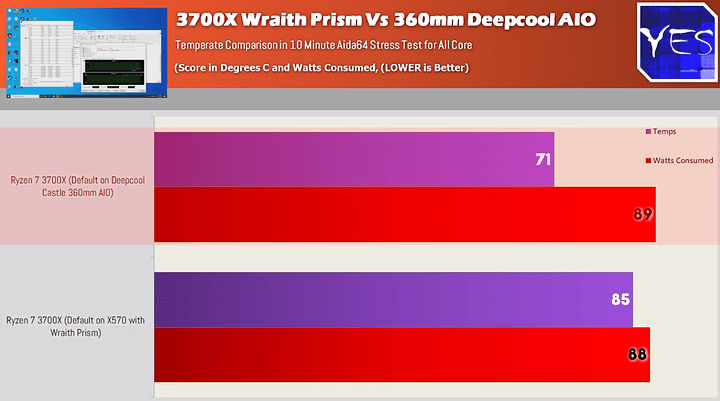 I have the suspicion, the water coolers are too focused on the “traditional” CPU design where heat comes from the center of he CPU.
You could try putting the powerplan in Windows to powersaver and see if that changes temperature (given you are on water, this may take moment or two).

The other issue with idle is that its bugged. Even the lightest application like Steam or some monitoring software causes huge voltage spikes and the CPU to fully turbo even though it is doing nothing. Some reporting software also only reports the last temperature of a core. If a core gets parked and is off it could still state 60C because that is how warm it was when shutdown.

While heat density is much higher on these 7nm chiplets and the die is offset it is much more of a software issue it seems at this point.

Many people on r/AMD are reporting normal idle temperatures even with non exotic cooling set ups. It seems to be luck of the draw really and is heavily dependent on motherboard, BIOS and even individual chips and installs.

Ryzen 3000 is still a mess in some ways. This launch wasn’t great. I will likely be upgrading to a 3900X but I’m waiting because of stuff exactly like this

So the graph seems about right, when dealing with stress tests and high temps, I get around the same thing but 3C higher, vs with the 1600x I would get about 65C under the same conditions.

As for your suspicion, you basically echoed what I said in my original post

And yes I also have the latest chipset drivers installed with the Ryzen Power Save plan in place. That’s what leads me to believe it’s the chipset design, since my voltages are now in check.

Yeah, that’s what exactly what I’ve been experiencing, I can be idling at 36C, but as soon as I open Firefox it jumps to 57C immediately!

Yes It’s bad, I just bought the 3600 and I have it on ASRock B450M-Pro4 motherboard, but the new 7nm is really something new and unexpected, AMD didn’t went to tell us that these chips will go hotter, I do understand on 7nm the heat is very close to everything, but it seems that, for now this is normal, I am setting on desktop from 35 - 55c sometimes when it reaches those 55c starts to go down but right then it boosts more temp and it goes to 60c+.

This video from Buldzoid explains why the cpu is so hot:

Do I have to watch all 40 min or there is some specifics on certain time?

Basically it can push more than half of the max power to one 1/8 of the CPU die and have a hard time getting the heat out to cooler.

Half of the max power to 1 Core? LOL that’s kinda crazy, but I understand it, but the thing is people think if they attach better coolers they will lower those temps, but it’s hopeless, better coolers can just lower the lowest temps lower but the CPU will still doing it’s THING. So doesn’t matter how much better cooler you have, you will still see these Jumps, as we are used to see them in high FPU calculations as per AVX instructions. But this new 7nm is whole new thing, I don’t know if this can be somehow be fixed a bit with new bioses as many are hoping so…

I hope they dont try to fix it just for PR. The thing is build to extract max performance in any given situation. If they break it just because people are not used to it it will be sad.
I read about using ion winds tech build into silicon to extract heat to cooler. Next node shrink may needed such tech to cool cpus.

Please keep in mind that the temp readings you’re getting aren’t for the whole chip. And that the sensor readout deviates from the type everyone’s come to expect from intel/amd chips of the past.

The CPU has a sensors network of thermal diodes and reports the hottest average area temperature from that.

So your entire CPU isn’t at the stated temperate, but a specific area is. That said it’s basically pointless to worry about.

Another think to keep in mind is that monitoring software easily biases with the boost target.

That said I would still say that your power profile / firmware is applying an excessive performance target or possibly your cooler mount is uneven. Mid 30C idle is possible at 22C ambient.

Maybe your AIO pump/fan speed is also low? Happened to me before.

EDIT: didn’t mean to reply to you but to thread & OP in general.
I’ll leave it anyhow.

Np mate, actually I am glad that you replied at all for this matter.
So in general the software reports the highest sensor in the cpu.
So the temp is not necessarily that high, right?
So this is normal, I and most of us we should not worry that much for this “Issue”. Well I am on 120mm aio in which was cooling the 1600X very good, I am not on 240/280 aio or some custom loop cooling. Well I added the CPU yesterday, instal it, add thermal paste in a " I " letter I closed it, I screw the screws good, because once in a month or so, I took whole radiator and fans remove the pump and clean it and put it back together, I have it with 2 fans push and pull. I mean it is descent for these cpus, not the best. The general issue was the high jumps of temps, all Ryzen cpus were doing this, my 1600X was going from 35c to 45c in a fraction of 10c or so, but 3600 knows to go from 39c to 55-60c. CRAZY tho. Many are reporting this, and my ambient is hot it is 29c, outdoors is 36c very hot now these days. And I have the DeepCool Liquid Cooler - Maelstrom 120T Gamer Storm. Pump runs at full as always, 2x Static Pressure Corsair 120mm fans 1550 rpms. They are silent at those speeds, but they rump up to those speeds only when CPU goes above 60c.

Maybe a vapour chamber based air cooler can do a better job at it.