Same reason why i picked the 1700 back then, sounds good.

I mostly agree with this but just to make sure I have a few questions:

What is the workload? What is the cooling situation? What board are you gonna use for that new chip?

Is there a workload where the 2700x makes more sense? Everything I’ve seen puts the 3600 marginally ahead of the 2700x in both multi core and definitively ahead in single core performance.

Well, the 2700X is about 100MHz faster in base and boost clocks but let’s call that even. Then we have the IPC improvements on one side and moar coars™ on the other. We also have differences in L3 and L1 cache sizes, admittedly I have no idea if there even is any software that is L1 sensitive buuuuut

I mostly agree … but just to make sure

I’m just checking to see if theres something you know that I dont. Admittedly I didnt dig too deep into those cpus.

Nah, I just have in my head that the 2700X should be a tad faster when you hit all cores for 100% over long periods of time. But that’s about it. For desktop use or anything that leaves room to breath in between … 3600 for sure.

Depending on the workloads kinda.
But if it’s mainly gaming then i would go for a 3600.
Unless you could talk your friend a bit down in price of that 2700X

I was basing my opinion on this benchmark 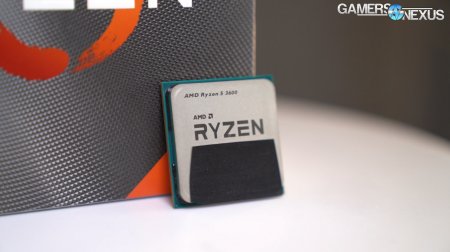 Alongside the 3900X and 3700X that we’re also reviewing, AMD launched its R5 3600 today to the public. We got a production sample of one of the R5 3600 CPUs through a third-party and, after seeing its performance, we wanted to focus first on this one...

Basically the only thing the 2700x won on was 7zip and adobe premiere.

Yup i believe that this has also something to do,
with the improvements on the Zen2 cpu’s in regards to memory latency’s.

Sorta reviving this post just to ask another question, i finally got the CPU, do i need to reinstall Windows since i need different drivers or can i just trust Windows to remove the old drivers?

do i need to reinstall Windows … or can i just … remove the old drivers?

I mean, you got nothing to lose trying it, right?

… uuuuuuhhhh, let’s not go there.

I mean, you got nothing to lose trying it, right?

Hmm, most of Steam library? But that can be redownloaded quite easily

… uuuuuuhhhh, let’s not go there.

i finally got the CPU

Not exactly, what happened was, the deal i talked about on the post went south, the guy i had sold the Biostar for gave up on it and returned it after a few days trying to use an Adata 3200mhz kit on it and only getting 2666mhz.
I was pissed, i contacted Terabyteshop (the shop where i got the motherboard from) and explained the situation, that i couldn’t even sell this thing, so they accept it back and after testing the claims, they gave me the credit to spend on the store again.
I ended up getting the 3600X because of the AMD promo where you get The Outer Worlds + 3 months of Xbox Game Pass, for R$130 more than the 3600 it was worth it, i was going to pick up The Outer Worlds anyway.

Well i hope that board comes with an updated bios out of the box.
Otherwise you will face a challenge.

Anyways when you only change the cpu on the same mobo,
you don’t need to re-install windows.
However if you also change the motherboard, then you will have to re-install windows regardless.
Unless your particular windows license is a retail and not oem.
Because a OEM license is tide to the mobo.
Trowing a new board in, will result in deactivated windows.
If your windows license is retail, then you can re-activate again without any issue.

As far as drivers are concerned, i think that both the Taich and the Fatality k4 generally,
will have the same drivers for the most part.
So that shouldn’t really be an issue.
However like i said, when your particular windows license is oem, and you also change the board,
then you will end up with a deactivated windows.

Well i hope that board comes with an updated bios out of the box.

It doesn’t but i still have a first gen chip here, so i will be able to upgrade.

Anyways when you only change the cpu on the same mobo,
you don’t need to re-install windows.

Generally not, i was only concerned due to a driver package i picked up directly from AMD instead of ASRock (the X370 chipset driver) that were aimed specificaly at first gen chips.

As far as drivers are concerned, i think that both the Taich and the Fatality Professional generally,
will have the same drivers for the most part.

Yes, they are pretty much the same motherboard, the *Professional only has some additional drivers like the Aquantia ACQ108 driver and Fatal1ty apps.