I had been considering buying a 2400G and underclocking/volting it to get the power envelope where I want it. Then I just came across this article on Liliputing:

Looks like it didn’t take much off the top to get it to run on substantially less energy. I doubt that the silicon is any different, so I will just buy whatever is cheaper when I’m ready and make it work. I thought it was pretty cool that they are already releasing lower TDP versions. Looks like they only hit the CPU and not the GPU to get the power usage down.

These are targeted primarily for Small Form Factor / low power type system where they have to stay cool under more cooling restricted conditions.

The TDP calculation for AMD is also not equal to power consumption. Neither does it for any CPU manufacturer

It follows an actual formula for “Thermal Design Power”, as it is about Thermal watts.

I quote this here as an image for reference sake: 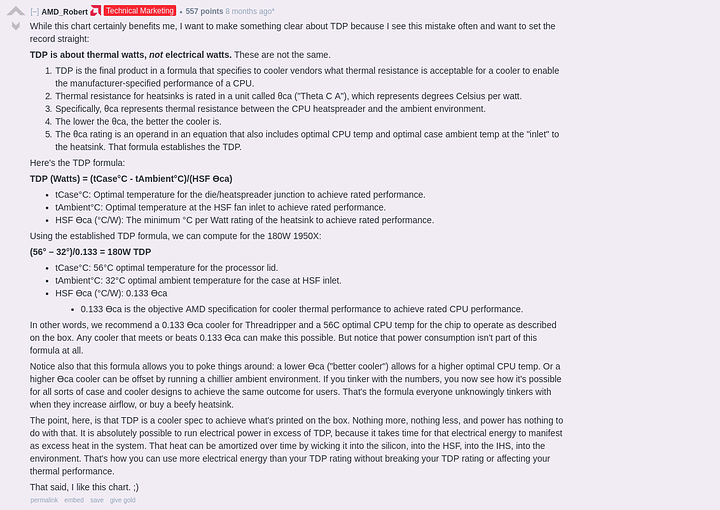 As an aside, a paper by Intel on their TDP spec https://www.intel.com/content/dam/doc/white-paper/resources-xeon-measuring-processor-power-paper.pdf

Well I guess it’s a good thing that I am just as interested in the lower thermal load as I am in the lower power consumption.

Has anyone seen a release date for these? Even a rumored one?
What is the next big thing? Computex?

I saw this shortly after starting this thread: 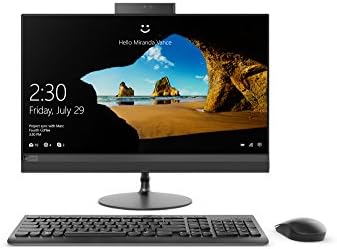 Bring a premium look to your home with the Lenovo IdeaCentre AIO 520: a slim desktop with a 23.8" display. Its sleek design is appropriate for any room, and you'll marvel at its exceptional performanc ...

But I didn’t pay attention so it might be sort of a place holder and never actually in stock yet. I get the feeling that it would be easy and/or cheap to buy one of these, similar to the T series Intel processors. Generally you can just get the regular version and underclock/volt as needed to get to the same place.

Then again I saw mention on overclock.net that one person had seen people doing this yet his board was giving him issues with anything below stock. I inquired where he saw other people underclocking/undervolting these as I am very interested and almost never see people doing this, but got no reply. I’m guessing people will have better luck with the 400 series chipsets.

I also haven’t heard about anything regarding the iGPU in Linux other than initial problems using 300 series boards. I’m reluctant to upgrade to this until I start hearing good news about the iGPU working without major problems. I may end up keeping my Haswell Celeron for another year or so until the next generation of stuff rolls out. Hopefully by then the RAM prices will get slightly more reasonable.

I am thinking about throwing out my Intel stuff almost completely and the GE version would be pretty neat for a router. That is also why I don’t really care about the state of AMDGPU for this chip.

I recently found that ECC seems to be a big no no with the APUs. Keep that in mind.

My current plan is to wait for the cheaper AM4 second gen boards.
Already have a 1200 and ECC memory lying around.

Some of you that have undervolted their 2200G or 2400G what is the ACTUAL power draw from the wall. I want to replace my mini PC but to do that I need a power draw of 65W or less under load. I’ve seen tests with 95W usage on the 2200G from the wall and 115W for the 2400G but those are not undervolted.

My NAS right now has no ECC. It hasn’t had any issues in 2 years now in respect to data correction.

That is totally fine. I’m not saying “you need that” but if you want to have it, well…

I don’t think there has really been any exhaustive work in this space as far as tests of undervolting and power consumption. I posted what I have found so far in another thread:

The only substantive things I have found so far is this: https://translate.google.com/translate?hl=en&sl=de&u=https://www.computerbase.de/2018-02/ryzen-3-2200g-5-2400g-test-amd-raven-ridge/&prev=search They had a small amount of luck with it. I think someone more meticulous about undervolting could possibly do better, depending on a ton of variables. There is also a video mentioned there which talks about delidding and replacing the TIM: If you are using the motherboard header to control the fan, then having the CPU die cooler would allow the fan to ramp up slower and I’m guessing top out lower as well. The cost of buying a delid tool for a single use to then toss in a drawer probably won’t make sense. If you are manually setting the fan speed and not maxing out the CPU then it won’t make a difference as far as sound goes, it would just be a few *C warmer at a given RPM. Given the small change I’m thinking a delid isn’t worthwhile unless you already have a tool handy. It is interesting how he said the PCB is roughly the same size as the Intel heat spreader, so it doesn’t need a tailor made tool for an APU. A forum post going into changing the voltage: https://translate.google.com/translate?hl=en&sl=de&u=http://extreme.pcgameshardware.de/prozessoren/507626-r5-2400g-undervolting.html&prev=search The biggest thing here is that motherboards are going to vary depending on the chipset and UEFI implementation, so it would be beneficial to try and track down people who have the motherboards you are looking to buy and have them go through the settings to see what options are there as well as the range of voltage options. The higher end X470 boards are probably going to have the best chance at having all of the options you need, at a premium price point. I’m hoping when the mid range 4XX motherboards come out that some of them have decent options as well. I’m not even considering any 3XX motherboards.

I’m waiting for the new motherboards to drop in July/August before doing my build and trying to piece together a system with deals on everything since I am a cheap bastard. I think the GE models are going to be OEM only and not boxed processors, much like T-series Intel counterparts. The undervolting I have done in the past has given me great results, and I did some testing of my current machine which I wrote about over on OCN:

I had previously seen loads of people at that time saying how terrible the Bay Trail processors were, and that you could just undervolt a Haswell processor - yet not a single person giving this advice had first hand experience doing such a thing. In the OCN post I went in to detail about my experience and how lacking many other places are about listing power consumption when it comes to low power machines. People tend to say ‘electricity is cheap’ or ‘just get an i7’ or some other useless garbage, so I feel your pain about not having any power consumption numbers.

I’m planning on setting up my 2400G with a PicoPSU and measuring the voltage and amps with separate devices to get real time numbers to understand power consumption for use with off-grid solar. I’m probably going to start the testing with a power brick and use a Kill-A-Watt meter as well to see what efficiency loss I get across the brick.

Different power supplies will have different efficiency numbers depending on the load and various other factors, which is another reason why I want to get the Volt and Amp measurements going to the PicoPSU. Less hardware between the power source and the motherboard input will give a more accurate picture of what the system is consuming. ATX power supplies geared towards higher output tend to be far less efficient with sub 100W machines, regardless of all the certifications, claims, and stickers they have on the box.

Not really worth it for the extra cost… but if i went ryzen I would try to get it. Although as people here have found out; it doesn’t seem to work on the APU models.