Hello everyone. im not new but im on my laptop and have no idea of my login details.

I recently did a couple of upgrades to a friends pc and he seems to be having a few minor issues… mostly in pubg which didn’t seem to be an issue beforehand.

Last week he turned up with a new case and a used rx470 4gb msi graphics card.

So I fully rebuilt his system inc fans etc that I had lying around.
the aio is push pull, plenty of airflow through the case and a total of 8 fans (2 high at front with an extra behind the aio, one roof, one rear, 2 gpu and 1 psu)
The rx470 is an msi one and looks the part, it has a single 8 pin power connector where the r9 285 had 2x 6 pins so its much more efficient along with quite a bit faster and it should really be a good game machine for 1080p with those specs…

But it seems to have a minor issue.
I know pubg is not a well optimised game but when he is landing its like half the area around him is not rendered properly. he says things in the distance are also doing this too. This is happening to him every game where the 285 did not do this and worked normally.
He says other games look kinda blurry too and im not sure what could be the cause.

Im thinking the card may have been mined on but I have no proof and I don’t believe the bios to be hacked or anything but I could be wrong on that. I really want to help him and solve the issue but im not sure how to.

My next move is going to be to remove the cooler, re paste the card and replace any thermal pads etc, clean the fin stack and rebuild but I don’t expect that to fix it if im honest.

just to be clear his settings are now higher than they were on the 285 and his framerate in the 70 region on freesync monitor. his game I had him move onto his ssd to see if it helped too but it didn’t

As PUBG is a bugfest, I would recommend using any other game to test if it behaves the same there.

You could run “Video Memory Stress Test” Link to check if the VRAM is good, then use Furmark to check for stability.

My next move is going to be to remove the cooler, re paste the card and replace any thermal pads etc, clean the fin stack and rebuild but I don’t expect that to fix it if im honest.

Replacing TIM may not be a bad idea. If anything, it helps with temps. Make sure to get the right thickness thermalpads.

thanks for the test link. I think its probably a good idea to check its reporting as an msi rx 470 too just incase the bios has been hacked

Try other 3d apps like Heavon benchmark its only a 300-400MB download. You could DDU and install an older driver or newer.

ive already had him use ddu and try an older driver before posting this thread. he said it made no difference.

Had an idea wich may help:
Go into the AMD settings > Gaming, if PUBG is not added, do that and then turn of every enhancement (used Superhot as an example here, works fine with my defaults): 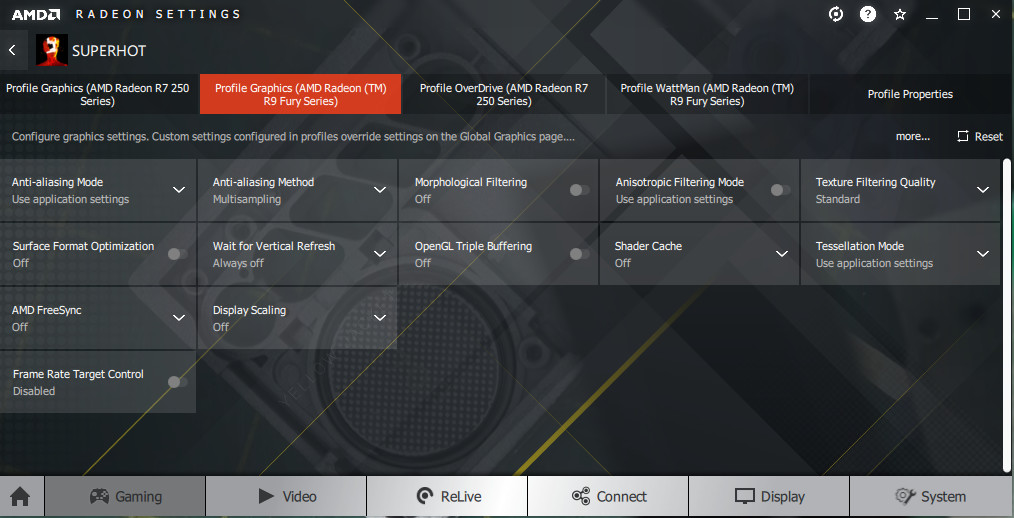 just to close off this thread it seems DDU doesn’t do all that is needed sometimes.
What fixed this was a clean install of windows then adding only the drivers for the new card. No issues since so im guessing the issue wasn’t driver related and was more down to the system being set up for an r9 200 series card

Talking of ex mining cards im sure this rx470 was but I can confirm the system runs a 62% user benchmark score which is high for an rx470. (highest score on there for a 470 is 64%) and this one is stock settings.
My guess is as long as a card functions after having a life as a miner it will then be fine for gaming.