I need help cause I am trying to make my Rpi 3 portable. I bought a Motorola Atrix Lapdock with the required cables to accept the micro usb and micro hdmi output that the lapdock supports. the issue im having is that the Rpi 3 is using up too much power and will on occasion reboot. Any commands i can use in the config.txt or in terminal to draw less power?

Under clocking will help but maybe not much, sounds like you need a bigger battery, I use a 10000 mAh battery with a pi 2 and get around a days worth. Have you tried removing one thing at a time and seeing what draws the most power?

no i havent but the only thing i have connected is the lapdock and the and its screen. heres a pic of what is connected. 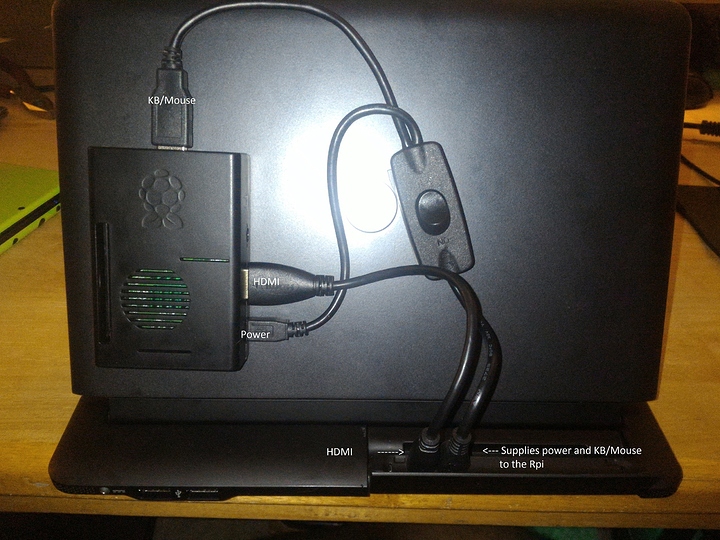 Cant really find the battery specs since these devices just started to surface as great ways to plug these in with a small amount of footprint. I also measured the amps from an app on my android phone and it fluctuates between 110 and 230 mA

Doesn't look like there is a great deal you can do about it, I'd guess that the screen is the major drain, just set it to turn off the screen as fast as possible so it doesn't use it much. What are you using it for?

just a linux machine so i dont have to spin up virtual machines but just as a way to teach myself linux. I figured that i can just get a battery backup like one of those you use to charge your phone and double side tape it to the back and connect the pi to the battery backup and the battery backup to the lapdock. still should get kb/mouse from the regular usb port its just the matter of giving the pi enough power. I took apart the damaged cable i recieved the first time and all what the ebay seller did was grab the data + and - and spliced that to the usb type a and the power + and - to the micro usb

Probably a power bank to power the Raspberry is the best option. Much easier and without any risks.

yeah thats what i was thinking. The lapdocks were great when the first raspberry pi came out but now as the pi2 and and the pi3 with better cpus now require more power sadly. the lapdock is good for the pi0 as well if anyone needs a pi laptop since the pi0 uses the least amount of power id say

Yeah, but more important than "power" is the amount of volts. The Pi is really sensible to voltage drops.

true. i know the pi0 does use less voltage out of all the pis out there

My Rasp Pi 3 model B flashes a lightning bolt top right on the screen when it doesn't have enough power, at least when I am running RetroPie. This mainly happens when I power it from a low power source, such as a power board with USB charging ports.

Can you back-power your Pi from the USB port? That might simplify your setup a little.

Not sure how to go about that. I know the pi1 setup involves back powering but for the pi3 im unsure

It's not a matter of voltage but the stability of it. Maybe the Pi Zero because of the lower power requirements might handle a bit better voltages drop but you're going to damage it in the long run anyway if the voltage is not an enough steady 5V. Some people even suggest using 5.1 or 5.2V power bricks for the Pi3.

Yeah i did see that when i was conducting research