Family member has bought a femtocell because he has a poor signal strength on his phone inside the house. What happens is the phone connects to the femtocell and all Calls and SMS/MMS data gets transferred over the internet. Now I got a bad feeling about having the femtocell connected directly to my router. Because in Mr. Robot they used femtocell to place a backdoor into Evil-corp’s network. I checked online and found out that they can be exploited and the user’s data can be snooped on.
http://www.securityweek.com/carriers-should-ditch-femtocells-over-security-risks-researchers

However I didn’t find any information that it could infect the rest of my computers connected to the router. People were saying that you should isolate the femtocell in its own vlan to stop it from getting access to the rest of the network.

Anyone know how would i go about doing that? I have DD-WRT installed on my router.

I haven’t used DD-WRT, but I can point you in the right direction for vlans.

How many lan ports does your router have?

What is a VLAN & How to Setup VLANs in DD-WRT

Wondering how to make segemented networks in the same router? Virtual LAN or VLANs might just be the solution for you. Find out how to set them up in DDWRT.

Ok good. Can you put the Femtocell on a dedicated port?

I’m assuming it plugs in and isn’t completely wireless…

It is already plugged in.

Ok cool. Then you should be able to put it on it’s own vlan via the instructions from @behindthetimesgamer.

It is slightly more complicated if it’s on a switch separate from the router because the switch would also need to be configured for the vlan.

I got stuck right away. Where it says go to Setup > VLAN.
I go to Setup on my router but there is no VLAN tab. The closest thing I could find was VLAN tagging in the Networking section. 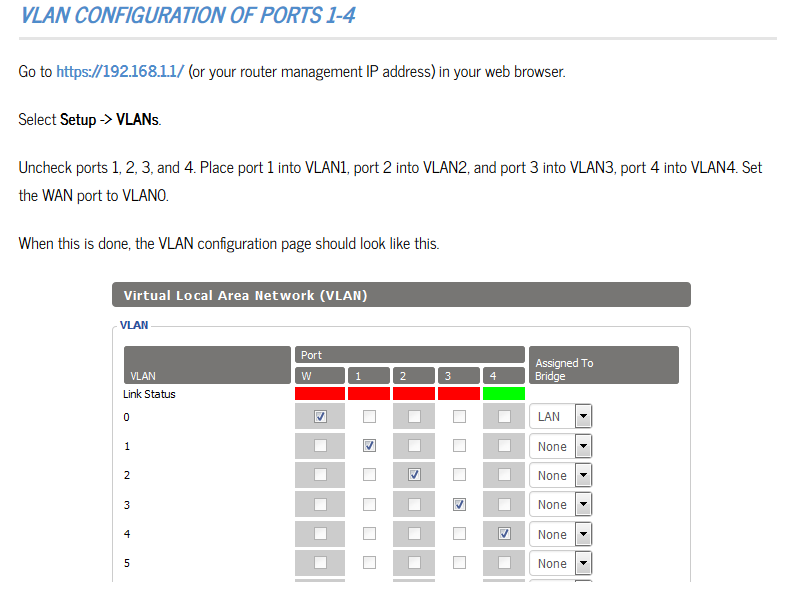 Put a PFSense box in your network if you want. Optimally ONLY to the femtocell.

I don’t have pfsense box and there isn’t any more space for it either.

VLAN tagging is what you want. Add a new vlan (any number 2 – 4000-something). Assign it to the port your femtocell is plugged into. Priority 0 is probably fine.

Enable DNSMasq as it says on the right unless the femtocell has a static IP. You’ll need to configure a separate dhcp pool for the vlan network.

You should be prompted to give it a network address. Just use a private network that’s different from what you’re using on the rest of your network

I don’t understand. How do i know which network is mine and which is private one?

One of those corresponds to the port you have the femtocell plugged into. I’m not sure I can help you figure that out. It’s not br0.

I don’t understand. How do i know which network is mine and which is private one?

In the Internet addressing architecture, a private network is a network that uses private IP address space, following the standards set by RFC 1918 for Internet Protocol Version 4 (IPv4), and RFC 4193 for Internet Protocol Version 6 (IPv6). These addresses are commonly used for home, office, and enterprise local area networks (LANs). Private IP address spaces were originally defined in an effort to delay IPv4 address exhaustion, but they are also a feature of IPv6 where exhaustion is not an issue...

Are you familiar with ipv4 addressing, subnets, etc.?

All I know is that it’s plugged into port 4.

Are you familiar with ipv4 addressing, subnets, etc.?

If you want to secure against the fear of this femtocell than you might want to learn some networking.


This should be good start to learning the basics and then keep on googling and asking questions and I will help in anyway I can
1 Like
oO.o November 3, 2017, 6:58pm #17

Ok, so I’m not sure I can help you out any further because I’ve never worked with a DD-WRT router.

I can tell you abstractly, that these are the steps you’ll need to complete:

@sanfordvdev - Is it possible that there’s a WAN port and a LAN port that’s wired into a layer 2 switch?

If that’s the case, the vlan config will require a smart switch.

Not for sure but possible since you can add the wan port as a switch port in the ddwrt config.