NOTE: I have 8GB of RAM installed right now

So my main boot SSD that served me for three years died a few days ago so I threw in my the HDD I am using for my LANsyndicate ITX rig. It has Windows 10 Pro. It is pretty much an unused WD Blue 1TB.

I have noticed that RAM usage is quite unreasonable

I have chrome set to automatically open 11 preset tabs every time I start it. Lets say I use it for an hour watching youtube and reading TS posts. Now lets say I close chrome and start playing GTA Online ,after 10 minutes my RAM usage goes up to around 88% percent and stays there, any higher and the page file for the HDD kicks in AND I GET MASSIVE STUTTERING.

So my question is...how do I get windows to release unused RAM, GTA only needs about 2GB, so what the hell is sucking up 5GB of RAM?!?

OTHER NOTE: this situation happens regardless if I open Chrome, It just takes longer

This is what is happening RIGHT NOW, I have been using chrome for about two hours watching youtube, checking emails, and browsing TS forum 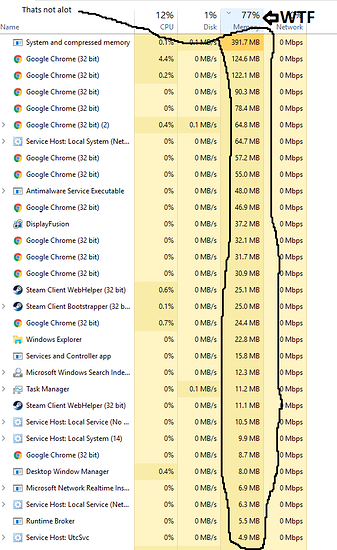 If I restart it solves the problem only temporarily, after a while its right back where I started

Looks like a memory leak to me. That is exactly the same thing that would happen to me while playing TES: Oblivion. I'd get video RAM leaks that would slowly fill up and take over all 4GBs of my Vram. It would take a couple hours to get that full and by then Oblivion would probably randomly crash anyway (typical Oblivion) so I never worried about fixing it because a crash/restart of it always cleared the VRAM.

Point is, this looks exactly like memory leakage. Web browsers are huge RAM hogs because everything is done server side these days and computers are really just windows that hold everything. I don't actually know how to fix that kind of problem, but hopefully this gives you an explanation of what you're experiencing and a groundwork to tune your searches.

The stumper is I never had this problem on my SSD, which was Win 7 upgraded to Win 10, not just Win10 (not sure if thats relevant)

try using a different browser for a bit

I think this an OS problem, like, Win10 is messing up on releasing RAM (maybe?)

If I were to restart my PC right now I would be sitting at 25%-ish usage, pretty normal 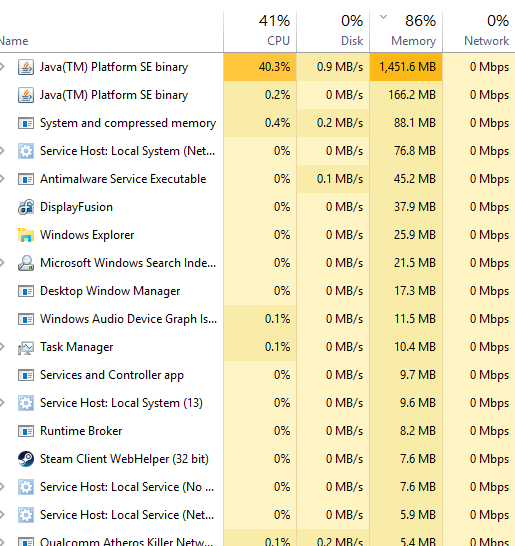 Minecraft runs on java right?
As you can see jave uses upto 1.45GB on its own.
For the rest i dont see any abnormaly high memory ussage in your processing list.
But it could be that some windows processes in the background using some ram aswell, like trustedinstaller for updates, or svchost.

trustedinstaller for updates, or svchost.

But wouldn't that show up in Task manager? right?

at the processes tab of all users yes.

Seriously, I have no idea how this is happening, and this is every windows process with no applications running other than task manager 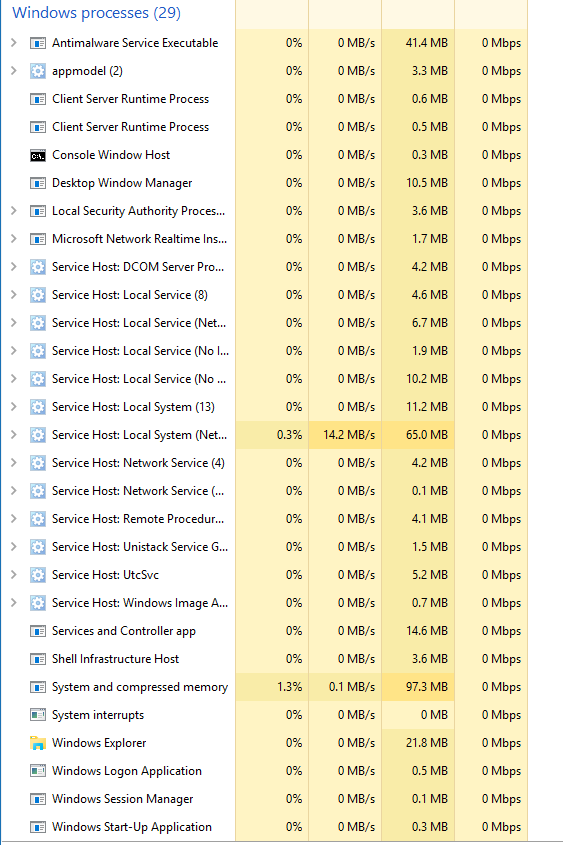 I want to let it sit and see what happens

okay so I guess windows wont do anything on its own, I'm gonna go for broke and run Chrome, Minecraft, GTA V, and SolidWorks 2015's render tool, Photo360, all at once

soild works is cussing me out saying not enough ram at

upgrading your ram might be a good idea.
i personaly use windows7 and have 16GB of ram.
Wenn i do cold boot, Windows allways checks for updates and shit, and trustedinstaller + svchost also do things in the background.
Wenn that is going on, my windows uses upto 5GB of memory on idle, from which svchost on its own takes 2GB of it.
This happens abit since windows10 is out, so im not fully sure what that process is exaly doing everytime on cold start.
But it sometimes can take upto 2+ hours before it has finnished its job.

I dont know if that also happens on Windows10.
But you might check that out.

I have a matching 8GB stick I could throw in there (currently in ITX rig) but still tho, I never had this problem before.

system is not stuttering, wut

i looked at your screenshot, and i dont see high memory ussage at the svchost atm.
But yeah minecraft uses allmost 1.5GB on its own on the java applet.

If this is a memory leak problem (and I really think that's the case) looking at the processes to see what is using how much might not tell you anything. If I understand memory leaks correctly, the RAM might still be full of junk while the processes say it's not taking so much. What a memory leak is, after all, is the system not registering that it can clear out and reuse RAM space that is full of stuff that is no longer needed. If that can happen, I see no reason to think that it can't say programs aren't using that RAM because, well, they're not. Not anymore, at least, and the space just wasn't cleared. So the overall usage is still high while monitoring processes tells you jack shit.

So that's what I think is happening here. Why, though, I don't know. You say it never happened on your SSD but it has happened on your HDD? That makes... no sense, and I've spent 2 months with a hard drive that has done some of the weirdest things I've ever seen. 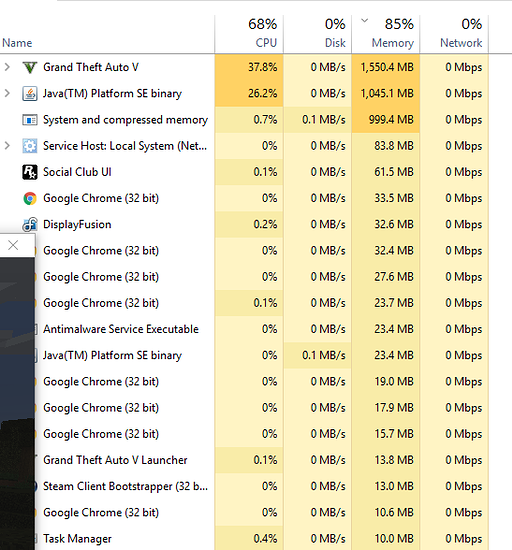 FASCINATING NEWS, I closed MC and GTAV, but I left chrome open and am now using only 31%

Now I am really lost 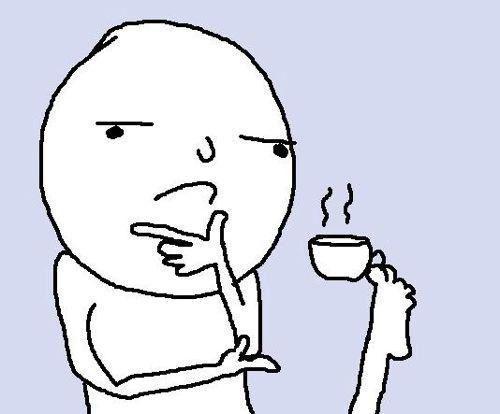 and I closed chrome and now back to 24%

Interesting problem you have there. Have you googled 'windows 10 memory leak'? or try 'non-paged memory leak'

Or maybe try to disable the Runtime Broker service. Other sites suggest it is caused by a specific windows update and uninstalling the right update will fix it. Others say it can be solved by setting the page file size to 0. (sounds crazy but win10 does things different i guess)

Memory leak sounds like the most reasonable explanation, but pretty hard to nail down a specific cause or solution. Try different things until something works.

thats probably your best bet for now, if you have a stick anyway.
But i agree that the memory ussage on Windows is rediculous.
Seems like Windows10 is still a god damm memory hog.