Reverse write amplification is possible as long as your SSD is half empty;) 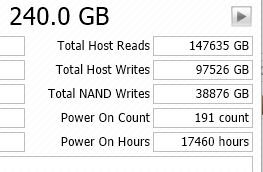 Just something I noticed as I was adding more drives to the system and checking their health.
The 240GB always has been at least half empty, I have 2 other ssd’s and 4 other harddrives to share the load. I expected more nand writes than host writes, but it looks as if the most of the host writes were highly compressible, or is write amplification simply not reported?

But yea, I guess that’s a real world test of 100% over provisioning over 2 years.