I have narrowed my speakers down to:

The Klipsch would be better, but I would honestly go to home audio for a solution as the quality of products you will find there is much better.

"pc speakers' are generally (not always) a half fast cheap implementation because pc gamers don't know any better. Well made PC games can leverage a home theatre setup better than a blue ray can, and a good set of speakers should last you 10-20 years, unlike other PC hardware. Speakers should be a buy once and be done, where continually 'upgrading' is a waste of money.

Long story short, depending on your situation, I would first consider piecing your way into a home theatre system to also game on. Get a decent pair of speakers ($500 or more), and buy the individual pieces here and there whenever you have the money. https://youtu.be/byU7RXyJt3s?t=169

I got an old Pilips 5.1 reciever we use to have on the living room, I connected via fiber (SPDIF) to my PC and was blown away by the quality, never heard it sound so good before!

Even a cheap 5.1 surround home theatre paired with your pc will serve you better than just " a pair speakers " Keep that in mind. Not a fan of 2.1 setups even if some are okay but lack dimension.

I actually own the Z623. They really aren't bad (family always compliments me on how "they sound great"), however, you definitely could get better speakers for about the same price, but will require more research.

Tip: Avoid big brand names like Bose, Beats, Monster, and Logitech (more often now than in the past) because those companies spend A LOT of advertising their products (especially the first 3).

Companies who advertise much less (Audio Technica, Shure, etc) spend much less on advertising, meaning that they have more money available R&D, so they can make better products, or they can make cheaper products which are better than the competitors (like my fabulous 2-year-old Shure 215's), OR the company can just pocket the higher profit (which is unlikely).

However Bose is ok, but you can get much better for the price. Generally best stay away from Bose.

Monster got big by marketing alone. They sold cheap junk to kids that didn't know any better. They are now owned by Apple, so still best stay away from them.

Good PC speakers are kinda rare it seems. I had a really nice altec&Lansing set that lasted 15 years. The amp is starting to hum now.

Replaced them with the klipsch 2.1 set and they are decent. I had to re-seat one of the drivers because it had a vibration at certain frequencies. No issues or complaints otherwise.

I bought a pair of Audioengine A2's 6 years ago and they are still very solid. I recommended them to my roommate 2 years ago and he ended up with the updated A2+ and he also has nothing but good things to say. Great speakers for desktop use, and if you find the bass lacking it is easy to add in a powered sub after the fact with their RCA outs. Might be a little bit more than what you set in your current budget, but this would be my recommendation.

ive found that for the most part, even setting up a fm transmitter then playing that over a home stereo setup via the fm band is superior to computer speakers. ive hard wired my computer to said stereo system and the difference is mind blowing. this coming from a oldster with bad hearing (tinnitus).
my 5.1 setup is an onkyo tuner/amp with some polk speakers /sub.

I have a logitech 2.1 setup. Its garbage but I'm normally using headphones. I only use them for showing someone a youtube video. I would not consider them a worthy alternative to play games with or enjoy media on. I also have a 700w sony receiver for my HTPC and a cheapo 300w yamaha receiver for my bedroom tv. I would not hesitate to get them again.

If price point is a concern, I would rather find a used/new shelf system. They're usually more capable than the computer speaker equivalent. Its a bigger foot print but its also a better setup. Also FWIW I think kilpsch is overpriced for what it is. Polk stuff sounds just as good for usually around half the price, though I dont think they have an equivalent computer speaker setup.

What this guy said. Keep your eyes peeled on Kijiji and craigslist for used AV systems and you could get a great price on one.

Thanks for all the advice. But, I am only interested in spend 150 or less on speakers. This is where the two above come in.

These are on sale for a decent discount.

Then you could pair them with something like this

Admittedly the amp is not great and you would probably want to replace it down the road with something more capable. It has nothing but positive reviews though and cant be any worse than the "computer speakers" built in stuff. I think you'll get far better range out of this kind of a setup.

I would still have to agree with others in saying if you do a little searching around you could find a used system that will meet your budget and sound x1000 better. Those computer speaker setups are typically bad at reproducing good sound because they are setup with bandpass systems or are too small to get decent range.

If I am breaking my bank by 100. Would these be any good? https://www.amazon.com/Audioengine-A2-Powered-Speaker-System/dp/B00FE9XGVM?th=1

if you're breaking your bank by 100 you could still go for the klipsch bookshelf and get a cheaper receiver. Then you'll have room for upgrades in the future if you want them. I'm not saying those speakers are good or bad, I have not used anything like those before. I typically stray away from the more expensive all in one solutions when it comes to audio for a few reasons. They are non upgradeable. Their audio range has been limited either by speaker size or by bandpass. The ones that are good usually costs about the same as individual components of a better system.

Your money though OP. What does your heart tell you is the better idea?

EDIT: Just throwing this out there for the extra $100

I upgrade my old hercules pc speakers that sounded bad compared to my headphones and received these ones yesterady: 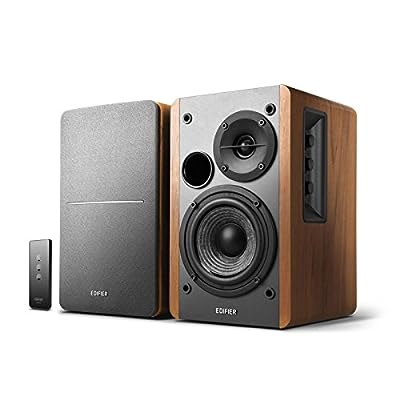 Retro Look Modern Sound The R1280T has combined a retro look with a modern sense of audio quality. These speakers have a retro wood case look and grey speaker grills and are an ideal setup for any dev ...

and they sound amazing compared the old ones.

https://jet.com/product/600-Watt-51-Channel-RMS-Speaker-System-Black/b05c5c4aebcf42a9ac39cc5146ab7f38 I decided on these Yamaha speakers. For what they are they are amazing imo.

Yamaha does make some decent stuff. I have one of their motorcycles. It plays all the notes I like to hear.