Regarding Linux inside a KVM/QEMU VM using a Ryzen CPU

This came up when I was trying to run a Windows Game called “Code Vein” which at the start seemed to be just unable to run with Proton. But some of my other systems running Linux OSes were able to boot the game fine, difference being they weren’t VMs.

Going back to my KVM/QEMU machine I was able to get the game to run correctly by changing the CPU Profile on QEMU/KVM to “qemu64” from the default host option.

With this I would like to find out if there is something I need to add to the EPYC or EPYC-IBPB CPU profiles to get them to function correctly, or should I leave it on qemu64, I am still new this but I have been enjoying the adventure

are you doing gpu passthrough? can you run other (linux native) games on the vm?

But Code Vein is the only game I have found so far that has the problem. Pretty much all other Windows only games run on my Ubuntu system

Same here, thanks to this channel and forum I have gotten this running, deferentially has been a great experience and overall there is a solution (using qemu64) but I just wanted to make sure I wasn’t getting cheap on solving an issue.

Also sorry for the delay in replying, didn’t think anyone was reading. Cheers for this though

You should try to use host-passthrough or host-model to tell the VM the right cpu instructions and cpu family. I also had problems with Epyc-IBPB as it didn’t let mee boot an older W10LTSC iso. After setting it to host-passthrough it told the VM that it’s running a Ryzen 5 1600 and everything worked since! It should also make the VM faster in some regards as qemu64 doesn’t passthrough all the instructions as said earlier!

After revisiting QEMU in the past few days for the purposes of having Android x86 with passthrough of GPU instructions (3D hardware acceleration in a virtualised environment, using VirGL in this case) and comparing QEMU’s performance with that of VirtualBox when it comes to providing an optimal virtual machine to run Windows XP in (VirtualBox wins, at least for AutoCAD 2007 and CATIA V5R16; I tried all three virtual GPU options in QEMU, with QXL and 64MiB of VRAM providing the best performance in QEMU), I have refreshed my memory on the matter.

In short, “EPYC” provides a minimal set of processor instructions, while “qemu64” provides the bare minimum to get an operating system to boot and function normally. Note that, as per the manual page, these various CPU options are meant for greater ease of migration across different hosts and/or for greater compatibility with many different host CPUs. If you don’t need to move the virtual machine between computers, then just go with “host-passthrough” and call it a day.

SlenderJim, good luck in your endeavours and have a nice day!

I have one question and one remark.

But I will be honest I have had no issues even with this setup like so.

After changing the CPU Cores and Threads to the correct values for the logic of KVM/QEMU, I was able to fix the issue with Code Vein. 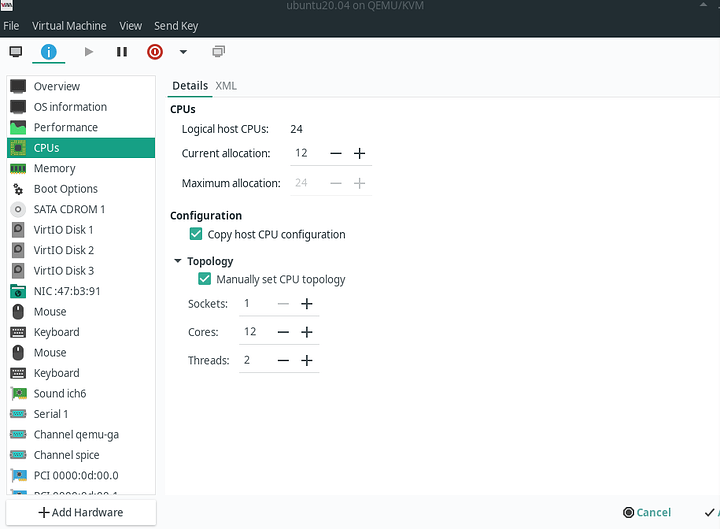 Cheers @elsandosgrande for your big help.

The biggest thing was I wouldn’t have guessed it was the CPU’s Core and Thread setting as everything else wasn’t suffering any issues.

Cheers again to the guys as well for your inputs

You’re welcome and have a nice day!