As the title suggests I’m looking for a managed switch to LEARN on. Hoping there’s a cost effective option.

With all your help I was able to set up my proxmox server, get drives in order, create a NAS effectively with samba, got my LXE to run Plex with a GPU passed through. So far I’m on a roll. So I’m thinking of what I would like to tinker around with next. I’ll post all the specs later when I can.

So now I’d like to work more with networking as well as security. I have a account with PIA, private internet access for those not familiar, and I wonder if I can integrate that for use, or somehow increase security on my home network. I’d like to be able to use both 1gb ports on my motherboard at once (asrock rack x470du I think) for faster speeds? I’d also like to use pfSense or pihole? Is there a way to use my server as the gateway to the internet instead of my router? I have kind of a janky network set up I’ll try to add a picture for.

Those are some of the things I’d like to do without another PC if possible. I also still have room in my case for another pcie card and was considering maybe a network device for it? I believe it’s a 8x pcie.

So, if I want to learn more about networking in a home lab setting and use a managed switch for the possibilities above what should be some good options. I think I’d only need a 8 port switch for everything in my office plus dual connections and IPMI connection.

Do you want web-managed or via serial (or don’t care)?

Mikrotik CSS326-24G-2S+RM could be an option. I know it has “too many ports”, but for the price and it being entirely passively cooled, it is hard to beat.

Mikrotik switches are nice. The one @MazeFrame linked would probably suit your needs.

@MazeFrame I do not know the difference really. Does one offer more options or do I need different hardware for one or the other to interface?

Size isn’t a huge deal just easier on the wife… Or well me if wife dosen’t notice it lol. 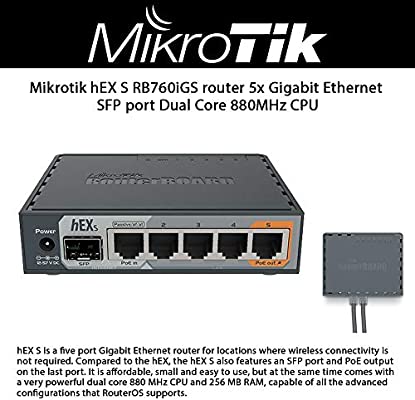 Could this be a possibility or does it lack a lot of functions of the other switch?

I do not know the difference really.

With web-managed switches, you need a computer with a browser (usually) to log in and make changes. The disadvantage is that one IP-Address is used up by the device and you can lock yourself out by mis-configuring the device.

With a console (RS-232), you need one of those USB to RS-232 adapters (unless you still have a computer that supports it directly). Advantage is that you can’t lock yourself out (except by forgetting a password). Disadvantage is having to plug in every time you want to change the config.

Some switches/routers/etc. support both, some (especially older enterprise gear) is limited to specific versions of internet explorer.

Could this be a possibility or does it lack a lot of functions of the other switch?

The hEX S is a router that can be booted into SwitchOS. So if would have more functions than the CSS326 I posted (and it has a PoE feed-through).

More functions and would work well for what I would like to do? Is having that os a good thing to learn? I’m attempting to mirror enterprise level gear on a not crazy budget. 200 is ok but 60 or so is better lol. I can get other equipment.

Thank you @MazeFrame and @Neilas for the help. I am assuming poe is optional and not always on.

The sfp plug…I need to buy what goes into it correct for what connection I want (ie fiber, ethernet etc)?

I’d suggest looking at Amazon and Ebay for used/refurbished switches from reputed companies like Cisco, Dell, HP and Ubiquity. I happen to have a pair of Dell PowerConnect 2848 managed switches, the manual can still be found online. That particular model is equipped with 4 SFP+ ports and I’m keen to get my hands on some SFP+ fiber-optic modules and suitable fiber cable to learn about link-aggregation. Stuff for that can be found fairly cheaply on Aliexpress, but for the moment my budget is zilch so it’ll be a while before I get to it.

(I got my switches for free as my then employer was about to throw them out. Right place, right time, pretty lucky there!)

That’s great @Dutch_Master, yeah I’m not in the field not does my family work in it anymore or my office would be filled I’m sure lol

I just want to make sure I get one that fills my needs and gives me the most options to explore as I start working with networking. I’d hate to buy something then go “I didn’t know that was a option or I need that”. Why I thought I’d ask you all.

Careful though as switches for Top-of-Rack use can be very noisy.

Thank you for all the help. It is much appreciated. I may go for the hex s if I can do more with it. And it’s a bit smaller. Once I consider a rack I’ll probably expand.

I noticed one is a router the hex S, and one is a switch…I assume there’s a difference here? Or just more functionality?

Careful though as switches for Top-of-Rack use can be very noisy.

What would you use the VLANs for? (Speaking of fancy switches?)

Like, would you use it in combination with some kind of wireless accesspoints to help you setup an isolated / yet completely open guest network that gets routed through PIA?

Do you have a use case in mind?

Are you asking me? Because I’m completely new to this lol I was just looking for something I can grow into, id hate to buy something then in a few weeks go “I need more functions to do what Id like”

I have what I’d like to do above, but and help is appreciated. Im hoping to run all traffic through pihole or pfsense some how. I need to do more reading on security but these two options seem popular. I do own a domain I set up, and i’d like to work with that eventually too but I just want to do it securely. Maybe run some sort of firewall vs using PIA for everything?

I noticed one is a router the hex S, and one is a switch…I assume there’s a difference here?

Normaly, yes.
In case of MikroTik, all Routers can be turned into Switches by changing their operating system.

I linked a switch because you asked for one not thinking about if a small Router/Switch like the hEX S may be better suited.

Routers and switches are both computer networking devices that allow one or more computers to be connected to other computers, networked devices, or to other networks. The functions of a router, switch and hub and are all different, even if at times... 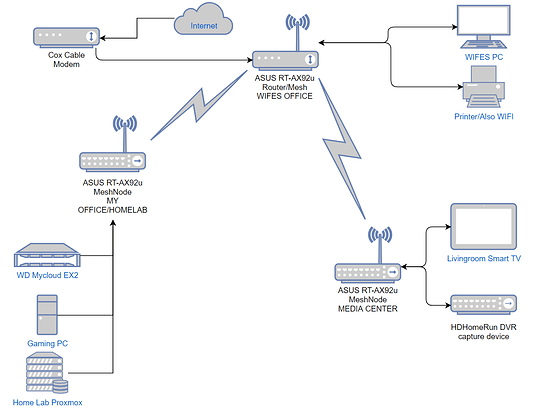 I know wifi is definately not perfered but its what I have. Also, I would prefer the Homelab in HER office but thats not going to happen sadly. Is this something I can work with to implement pfsense and pihole? Or… do I NEED a physical device between the modem and router?

@MazeFrame thanks for the info to read.

Think I’ve decided on one. 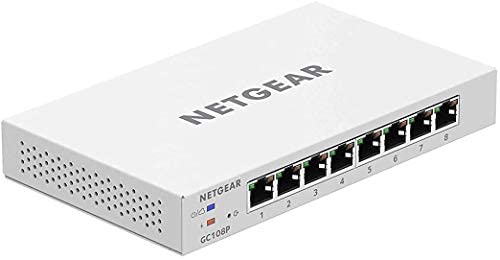 Hopefully this is a good choice for starting with

I went with the non poe as I have no need for it now and have a injector on hand if that changes.
Thanks for all the help everyone.

Well, thats on hold. I had a hard drive fail and got no notification because I didn’t have it set up. Now I need to find out if theres a way to route those failures to Proxmox to populate in the log some how. Then I might do emails, but haven’t made much progress in the last few days as I wait for my drive…

If you really want to go down the hard core enterprise route and don’t need a lot of ports you could try to find a Cisco 2960-CG or 3650-CX switch. You can get 8 or 12 port versions with or with out PoE and they’re fanless. They would be great to learn on. The first command you’d need to do is “conf t” then “spanning-tree portfast default” then “end” then “copy run start”. Then you can learn from there.