On speccy it says that everything is stupid hot, the notebook's running fine in terms of performance ( even though the ram is horsesh*t). But when i touch the side, where the ventilation goes out it burns my hand because of how hot it is! Here's a pic: 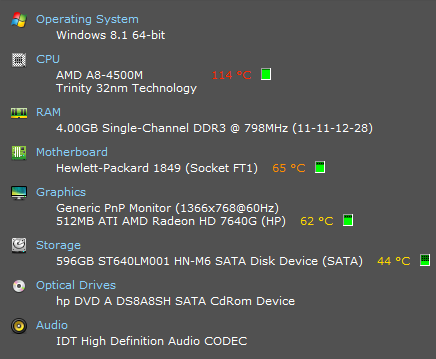 whoa, take a dust blaster into your vents

still pretty hot. you might need to open it up and replace the thermal paste.

The ram is crap because you've only one stick. Therefore, you aren't taking advantage of dual channel, making it slow as piss.

No, it's 800mhz DDR3 (double data rate 3) meaning the effective clock speed of it is twice what the program states. Your ram is 1600mhz.

Oh, thanks! I'd like to put an extra stick of ram in it but it's manufactured by Hyundai Electronics and i can't find it on my country (Argentina)

If the air is extremely hot coming out the side, its more likely a fan issue than a heatpipe/thermal compound issue.

Think about it. A faulty heatpipe or old thermal paste means that the heat isn't being transferred.

Is it moving a lot of air? If its extremely hot the heat is being transferred, but it may not be moving enough air to cool it.

Laptop heatsinks clog significantly faster than desktop PC heatsinks. in order to more effectively cool a CPU with a small heatsink, they use a heatsink with a high fin density, this makes it much easier for dust to buildup on the back of the heatsink, and thus you can get buildup like this in a relatively short amount of time 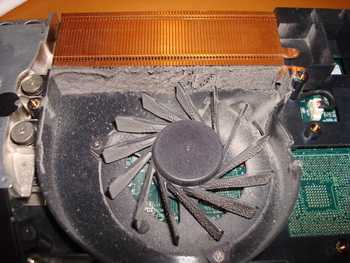 if you let the dust buildup for too long, then it will get caked on, and you will then need to take the laptop apart and directly clean the heatsink.