Ready to give up, No distros want to install [SOLVED]

My Issue is I will try to boot into an installer or OS, and it just black screens. We narrowed that down to some Xorg stuff, or my GPU not being supported... something. its all far over my head.
its been ages since I got as far as I did in that thread, and I dont remember AT ALL how I got there, and i cant figure that out from the thread.

I'm in a situation where I have only a few hours each day to work on it, and rarely am I able to confidently say I'm emotionally driven enough to work on it at all. Kinda ready to just lay down and accept defeat... sell it all. :/

Posting here just to see if anyone else also has had this issue, and if they know what I should do... I'm a complete idiot when it comes to linux, and tech in general, all i know how to do is properly assemble the physical PC and work my way through a graphical installer.

My system specs are in the first post on the linked thread, but i will post them here aswell,

SIDENOTE: I came to the ''fuck it just give up on my morals and use windows'' after a friend on another forum gave me a windows 10 pro key, and i installed it, worked fine for a little while, like 3 minutes then it shut itself off, and rebooted. so it gets to the login screen again and before i can even mouse over to the text entry for logging in it shuts down. :/

should i try 15.10 real quick? o.O
i just hear a lot of people talk about how bad ubuntu is, and it makes me shy away from it sorta. i used it on my old P4 machine but didnt find any thing i disliked other than unity, ofcourse asuming as i grew more linux-literate i'd dislike it.

15.10 should sort out your issues, I was having trouble dual booting when installing 15.04, then downloaded 15.10 and worked like a charm. Just be careful, if you're getting black screens now, I updated my system a couple hours ago and it cause it to black screen before the login screen. I just rolled back to the last version of the kernel and it worked fine.

Unity is bad. 15.10 uses gnome fortunately. Ubuntu is nice in respect to popularity which draws support.

15.10 should sort out your issues, I was having trouble dual booting when installing 15.04, then downloaded 15.10 and worked like a charm. Just be careful, if you're getting black screens now, I updated my system a couple hours ago and it cause it to black screen before the login screen. I just rolled back to the last version of the kernel and it worked fine.

UPDATE: @b1gbadwo1f @flamesilver finished downloading, about to burn it to my USB drive. does this look about right? 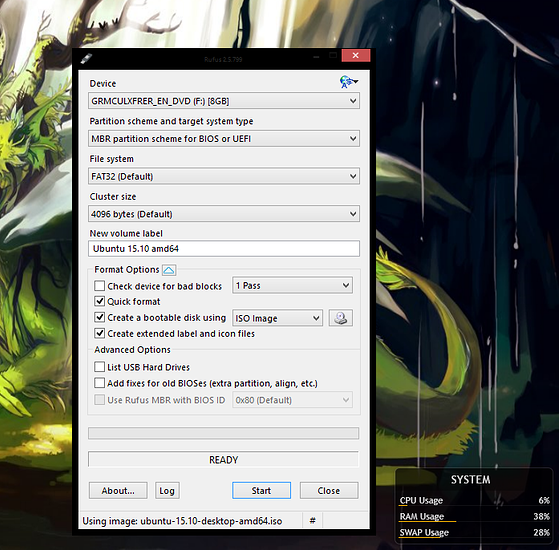 I'll get back to you guys as soon as i have a verdict on if it worked. :D

Looks fine to me :D

for a USB2.0 drive that was eye bleedingly fast. o.O it usually takes like 12 minutes to load up an OS ISO.

OH MY FUCKING GOD
i booted in non-UEFI mode and it looked like it was about to do the same thing and then right as i place my pinky finger on the reset button i see ubuntu logo and 5 dot progress bar.

shit its the unity version. <_<
according to http://askubuntu.com/questions/450294/how-to-switch-from-unity-to-gnome i shouldnt have to re-install with the GNOME version, just switch over? o.O

which desktop ui do you prefer?
and which distro´s did you tried who didnt work?
I assume you tried mostly Ubuntu based distro´s based on the 14.04 lts?

non-unity. truly ive not had enough time with other ones to see which i prefer, but i know 100% i like GNOME 3 more than unity,

i had tried pretty much ever flavour size and shape of the 'buntus.
tiny core, core plus and the run down version.
puppy, (specifically quirky)
manjaro, all versions i could get my hands on,
fedora 19, 21, and 22.
the list goes on.

The link i posted above is the direct download link for Ubuntu Gnome 15.10.
maybe that works for you.

Other then that you could also try the Ubuntu Mate.

how do i mark this as solved? :D

Here is also a link to Ubuntu 15.10 with Mate desktop.
Not sure if you like that, but you could try it.

how do i mark this as solved? :D

you could edit the topic title [solved]